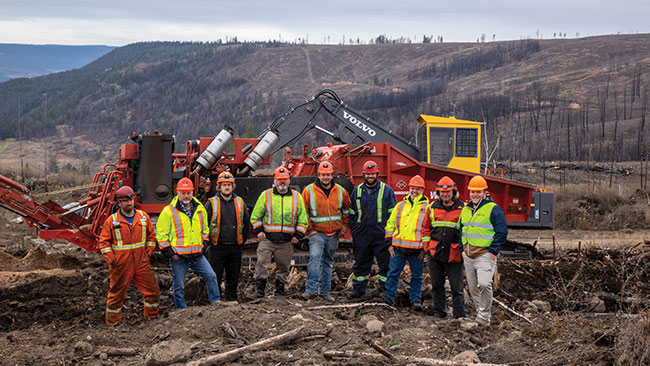 A $1 million grant from the Forest Enhancement Society of BC (FESBC) is allowing a First Nation–owned business to deliver waste wood that would have otherwise been burned to a pulp mill, pellet plant and power generation company.

The first phase of this project began in early 2017, when a $3.4-million grant from FESBC allowed the company to reduce wildfire risks and rehabilitate forests impacted by mountain pine beetles west of the Anaham community.

The $1-million grant, which FESBC provided in 2019, funds the second part of the project. It focuses on recovering and using at least 200,000 cubic metres of waste wood fibre that accumulated during the first phase of the project.

Waste wood is normally burned on site to help reduce wildfire risks. However, the grant provided by FESBC allows Central Chilcotin Rehabilitation to divert the residual fibre for other purposes and reduce greenhouse gas emissions by not burning the material in slash piles.

Recovered pulp-grade logs are being hauled to Cariboo Pulp in Quesnel, B.C. The remaining material is being ground up by Tsi Del Del Ltd. and shipped to either Pinnacle Renewable Energy’s pellet plant or sent to Atlantic Power to generate electricity, both located in Williams Lake, B.C.

The recovery effort has resulted in 200,000 cubic metres of residual fibre (about 3,300 truckloads) being used since the project started in September 2019, generating between $7 million and $8.5 million in sales for a product that would otherwise be burned.

The grant supports the full-time equivalent employment of about nine loggers, truckers and other forestry workers.

“This project demonstrates how factoring in greater waste-fibre utilization in projects like this generates multiple benefits,” said Doug Donaldson, minister of forests, lands, natural resource operations and rural development, in a statement.

“First Nations leadership has reduced wildfire risks and rehabilitated forests, and now the company is ensuring that the residual fibre is also put to good use.”

Percy Guichon, director, Central Chilcotin Rehabilitation, said, “This funding allows us to maximize our ability to deliver a by-product that is typically left on site, increase the overall recovery of fibre and create long-term carbon benefits by harnessing new values from traditional logging sites outside of the saw log fibre supply.”

The two First Nations that operate the company hold multiple forest licences. They aim to increase their use of waste wood, bringing an additional 20 to 50 per cent of leftover wood fibre to market. Without the FESBC grant, it would be uneconomical to recover the waste wood fibre.

The FESBC’s $1-million grant to the Central Chilcotin Rehabilitation Ltd. project is supported by the Low Carbon Economy Leadership Fund and the Forest Carbon Initiative.