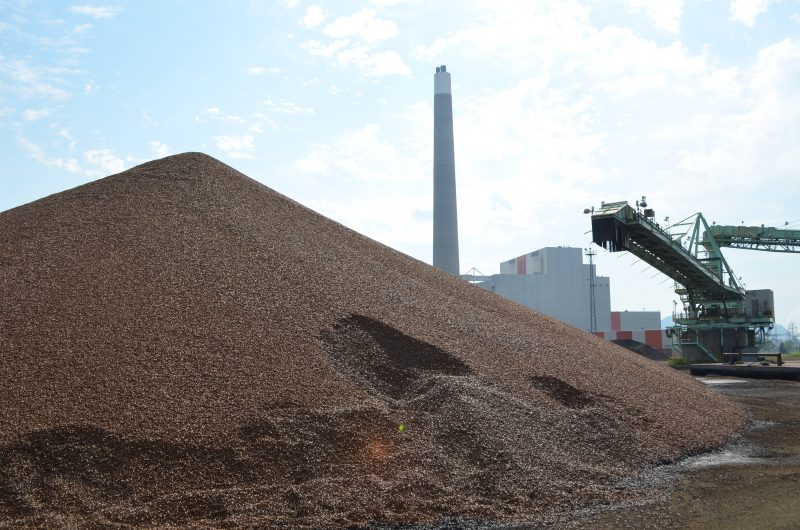 Wood pellets are an upgraded renewable solid fuel which, if sourced sustainably, offer a low carbon-emitting alternative to fossil fuels. They are widely used for heating homes and businesses in modern pellet boilers1 and stoves. Pellets are also used as a substitute for coal in electric power generating stations.

This article will mostly focus on what are commonly called industrial wood pellet pellets that are used in power plants.

But it should be noted that the heating pellet markets are expected to continue to have steady growth. Heating pellet markets are influenced by policy and, in some cases, are supported by it. Policies that impact the cost of fossil heating fuels, that lower the cost of installing a pellet-fueled appliance, or that provide support for using renewable energy, facilitate the decision to switch to a pellet boiler or install a pellet stove and use wood pellets for heating. Examples are carbon taxes, pellet boiler and pellet stove rebates, and thermal renewable energy certificates (T-RECs2). 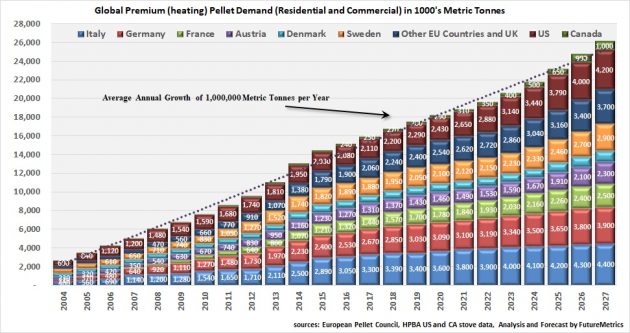 Whereas the heating pellet market is influenced and supported by policy, the industrial wood pellet market is entirely dependent on policy support in most jurisdictions. In the heating sector, in some locations, pellets are the lowest-cost heating fuel, but in the power sector, coal is typically more costly than pellet fuel. Lowering carbon emissions from electricity generation via co-firing pellets and coal, or fully converting a power station to operate on 100 per cent pellets, requires government mandates and support3.

The outlook for growth depends on which policy scenario one chooses: current policy with no changes, or evolving policy in response to the increasing negative consequences of climate change.

Under current policy support schemes, after 2023 there is limited future growth forecast in the industrial wood pellet market. Europe and the UK will have reached the limits of the current policy support in 2023. It is even possible that some support in the UK and western Europe will expire in the late 2020s, causing demand to fall. Japan’s growth in pellet demand will continue for a few more years. But most of Japan’s feed-in-tariff (FiT)-supported independent power producer (IPP) projects are expected to be up and running by the end of 2024. South Korea has potential for higher demand, but the collapse of renewable energy certificates (REC) prices and changes in REC weightings have depressed pellet demand and thrown great uncertainty into how support for pellet fuel as a substitute for coal will evolve.

However, even under the “current policy” scenario, there is still growth expected. The forecast is for an additional 6.8 million tonnes per year of demand in 2027 compared to 2020 demand levels, with most of that new demand to be online by the end of 2023. And, as is discussed in the rest of this article under “evolving policy” scenarios, FutureMetrics expects that policies will evolve and demand in 2027 and beyond will be much higher than in the chart below (see Figure 2). 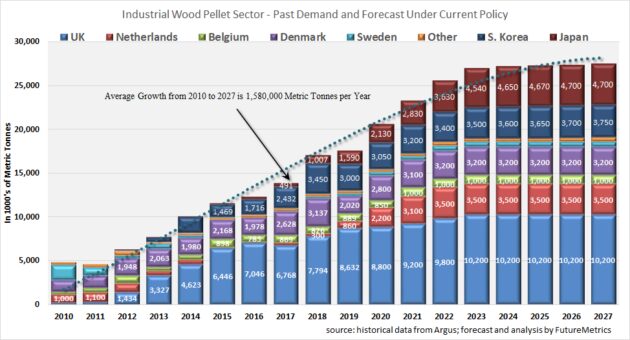 Before discussing the evolving policy scenarios, a look at Figures 3, 4 and 5 show some detail on demand history in three major importing countries: Japan, the UK, and South Korea. The only major pellet importing country of the three that is showing strong growth is Japan. 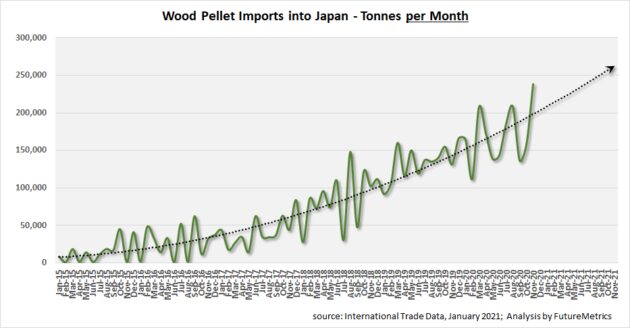 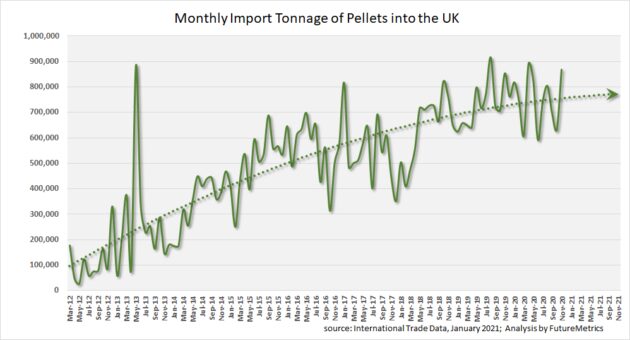 Figure 4 – Pellet Imports into the UK 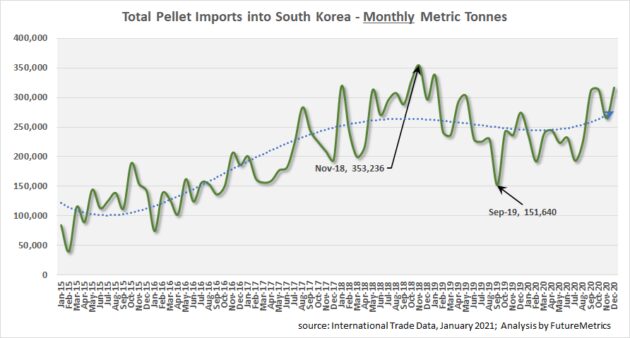 The increasing negative impacts of climate change are likely to motivate policies that will support the use of industrial wood pellets for power generation4.

Under the “evolving policy” scenario, FutureMetrics is confident that Japan will have policy that will support co-firing, and perhaps a few full conversions to pellets, at major utility power stations. The Japanese government has set goals for how power is generated that, under most scenarios, will require that some portion of the coal in large utility power plants is replaced with industrial wood pellets. The government has also set minimum efficiency standards that low-efficiency power stations can meet by co-firing5.

Forecasting the quantity of pellets that Japanese utilities will demand requires a number of assumptions. However, based on those power stations that are likely to use pellets to meet minimum efficiency requirements and expectations that pellets will be part of the strategy for compliance for CO2 emissions goals, FutureMetrics expects an additional five million tonnes per year of demand by 2027. Figure 6 shows this scenario. 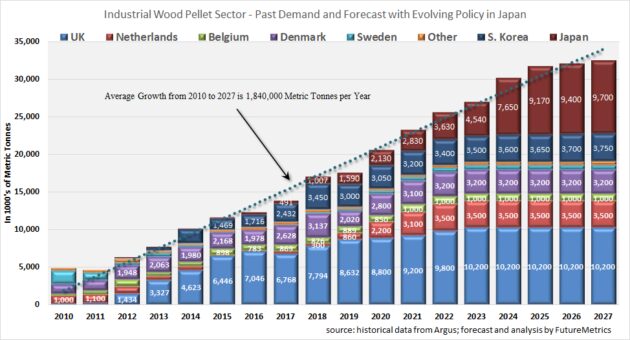 But, there is another likely “evolving policy” that includes the United States, Germany, and Canada that pushes potential demand in 2027 higher.

The United States, under the new Biden administration, is expected to pursue aggressive policies aimed at fighting climate change. During the final few years of the Obama administration in 2015-16, FutureMetrics analyzed the effects of the Clean Power Plan (CPP) and determined that a low-cost and reliable pathway to compliance was via co-firing pellets with coal at selected power stations. Using a similar analysis and an expectation that new U.S. policy will form a similar foundation for change, the U.S. could be using 5.2 million metric tonnes (or more) per year of industrial wood pellets in U.S. power stations by 2027.

Some work is to be done to familiarize U.S. policymakers about the efficacy of a strategy that has proven itself to be a relatively low-cost, on-demand, quick-to-deploy, and low-carbon source of power in other jurisdictions. See the link in note No. 4 for thoughts on U.S. policy.

Meanwhile, there is evolving policy in Germany that may facilitate the substitution of industrial pellets for coal in power stations6. Germany is also a major producer of wood pellets. While estimates of actual future consumption are difficult, based on CO2 emissions goals, goals to phase out coal, and continuing policy discussions, FutureMetrics thinks it more likely that not that Germany’s demand could equal or exceed 3.2 million tonnes per year by 2027. This amount represents about 815 MW’s of generation capacity7.

There is also potential in Canada. The combination of a carbon tax and a mandated coal phase out suggests that a few of the newer coal plants would benefit from using to pellets. Capital Power’s Genesee #3 516 MW coal powered unit in Alberta, commissioned in 2005, is converting to natural gas. But, according to Capital Power, the plant will retain “dual fuel” capabilities. The newer 463 MW Keephills #3 unit also in Alberta, commissioned in 2011 and owned by TransAlta, would consume about 1.8 million tonnes per year if it were fully converted from coal to pellets.

At this time, neither Capital Power nor TransAlta have plans to use wood pellets in those station. TransAlta has stated the Keephills #3 will continue to use coal. If that plant used wood pellets produced near its location in Alberta, then, in combination with carbon capture and storage (CCS), Canada’s net CO2 emissions would be at least a negative 850 kilograms per megawatt-hour of power generated8. In other words, baseload power would be generated while lowering atmospheric CO2 levels.

There are other Canadian coal stations9 that could make the transition with relative ease. While forecasting demand depends on many variables, it is possible that Canada could be using 2.1 million tonnes per year by 2027. Ontario Power Generation’s 205 MW Atikokan, Ont., station already runs on 100 per cent pellet fuel.

There are other locations in the world that may adopt a pellet fuel strategy for the power sector. But, with just those discussed above, as the Figure 7 shows, it is quite feasible that industrial wood pellet demand will essentially double from 2020 to 2027. If these “evolving policy” scenarios occur, pellet demand in 2027 would be 40.8 million tonnes per year. 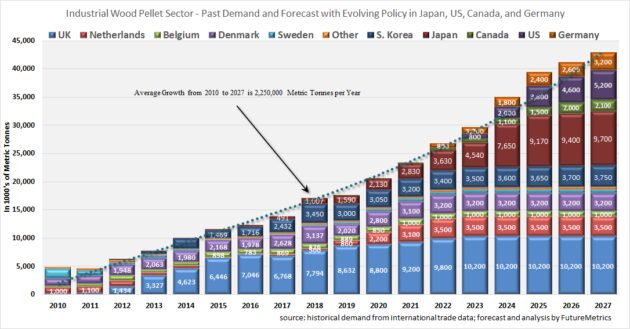 Climate change’s increasingly costly consequences will influence how policy evolves. Using industrial wood pellets to help create a dependable on-demand and efficient low-carbon power sector will be part of the pragmatic and rational off-ramp to a decarbonized future.