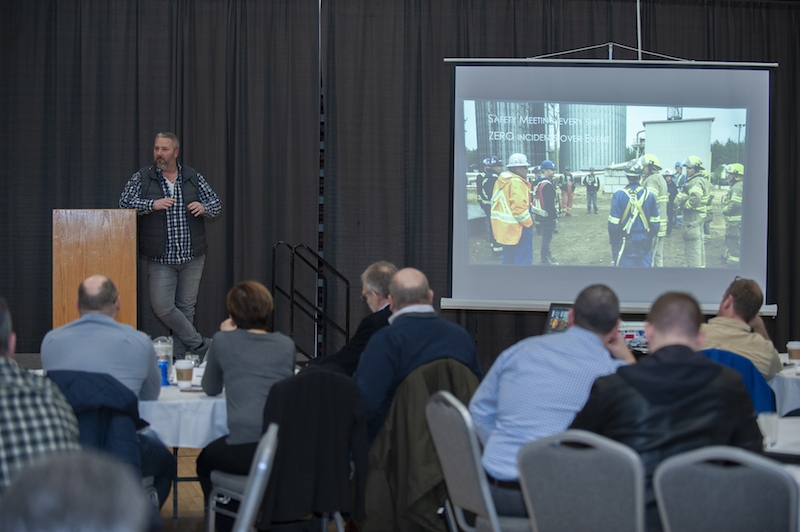 In 2017, Pacific BioEnergy Corporation pellet plant in Prince George experienced a silo fire. By employing industry-leading practices, the company turned a frightening situation into a success. Over several days, company crews and first responders used nitrogen injection to extinguish the fire and safely empty the silo. There were no injuries sustained. This incident was described more fully in an October 2017 Canadian Biomass article.

Although Pacific BioEnergy’s performance was essentially a textbook case of how to properly manage a silo fire, WPAC and WorkSafeBC realized that not every silo fire would have such a positive outcome. There are many famous examples of poorly managed silo fires that ended in catastrophe. Thus, we decided to organize a workshop for industry and fire-rescue personnel.

Silo fire expert Henry Persson of the RISE Research Institute of Sweden was the keynote speaker. Author of the seminal Silo Fires – Fire extinguishing and preventive and preparatory measures, Henry Persson is renowned worldwide as a top expert on silo fires with more than 30 years of experience.

Shawn Bells, vice-president of Pacific BioEnergy, walked the audience through the events surrounding the company’s 2017 silo fire, demonstrating that company personnel and Prince George firefighters had followed all of Persson’s recommendations.

Silo fires are unique and require a different approach than conventional fires. For example, using water for fire extinguishing will actually worsen the situation because wood pellets will swell and potentially cause a silo to burst. And opening a silo to access a fire is likely to cause an explosion, so fire fighting must take place while crews are essentially blind to what is occurring inside the silo.

The key takeaways from the various speakers included:

Next up: we are planning for our annual Wood Products Safety Summit to be held on June 11, 2019 at the Prince George Civic Centre. Stay tuned.