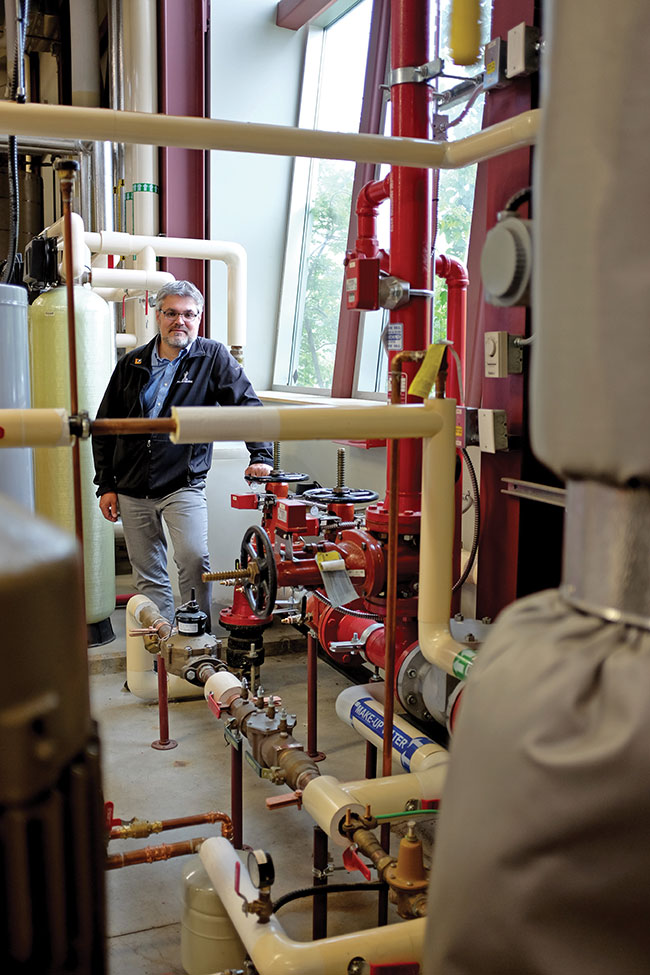 For years now, members of the Canadian biomass industry have been pointing to Europe as an example of successfully using district energy systems as a renewable, low-carbon way to heat buildings, and even entire cities. Yet Canada still relies heavily on individual heating systems for buildings, usually burning natural gas.

But, the City of Prince George is proving that district energy systems running off of renewable resources can work in Canada – and even be more efficient than natural gas. In January 2020, the city’s Downtown Renewable Energy System successfully operated with 100 per cent biomass, despite temperatures reaching a record-breaking -42 C.

The system, which provides hot water heating to 11 municipal and provincial buildings, has been operating since 2012, William Wedel, utilities manager for the City of Prince George, explains. That’s when the city contracted with nearby Lakeland Mills to provide heat from their boiler to the system.

The agreement came about when Lakeland Mills was in the midst of rebuilding after the dust explosion in April 2012. As part of the arrangement, Lakeland Mills received an electrostatic precipitator from the city. The precipitator removes 95-98 per cent of all the particulate matter that comes off the mill’s burner, which helped improve downtown air quality.

Today, Lakeland Mills’ boiler can produce up to 13 megawatts (MW) of heat using sawmill residuals. Although the city’s contract with the mill stipulates providing up to five MW of heat per day, the system has only used 2.5 MW per day at most, Wedel says.

Inside the system
To set up the system, the city worked with a consultant, FVB Energy, but most of the pipe work and equipment installation was done by the city itself, Wedel says. Local welders welded components and crane companies lowered equipment into place.

The system is an underground loop made up of more than three kilometres of steel pipes, which are up to eight inches in diameter and wrapped in insulation. From the boiler at Lakeland Mills, heat is delivered to Prince George’s Downtown Renewable Energy Centre, which pumps the hot water through the system.

“We have dual lines – a supply and return line – that go through the downtown core and provides heat to a number of buildings throughout that area,” Wedel explains.

“There’s a loop that connects between the Lakeland boiler, a heat exchanger, and then the energy goes through another loop that comes to our downtown plant. The downtown plant is what actually circulates the heat through the rest of the system.”

Each building is connected to the system through an energy transfer station that transfers the heat from the supply loop to the building.

Depending on the season, the Lakeland Mills system uses three to six cubic yards of fuel per day. The mill puts all of its sawmill waste material into its boiler, including the bark and shavings. Even when the mill has had to curtail production, Lakeland has kept the boiler running to provide heat to the system, Wedel says.

There is, of course, a backup plan in case the sawmill cannot continue running its boiler during maintenance activities or there is an interruption of supply: the city has two 2.5 MW Simoneau boilers (which use natural gas) at its downtown plant to provide energy to the buildings. 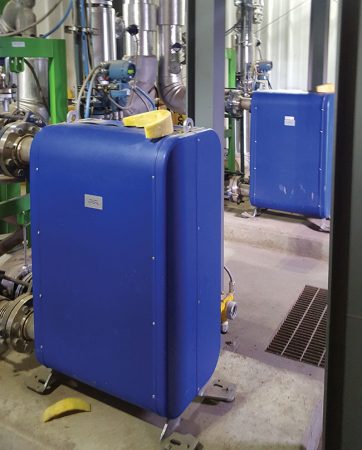 The heat exchangers that transfer the heat from Lakeland Mills to Prince George. Just one of these heat exchangers provides all of the heat for the buildings that are currently connected to the system. Photo courtesy William Wedel.

A balanced approach
The environmental benefits of the system have been significant, Wedel says.

All told, the system reduces greenhouse gas emissions by 1,868 tonnes per year, while also helping the city to reduce its reliance on fossil fuels.

The system is also highly efficient.

A boiler system fluctuates off and on often to meet the heating need, which means it puts out a lot of energy and then shuts down, whereas the Downtown Renewable Energy System’s energy output stays more constant, Wedel adds.

Economically, connecting just one building – the Prince George courthouse – to the system has saved the province of B.C. about $175,000 in carbon offsets and natural gas purchases. The city is also currently conducting a detailed analysis on the economic benefits of the system to learn more about its economic impact.

For the buildings that connect to the system, initially it costs as much as installing a boiler system. But after 15-20 years, the buildings on the network won’t have to buy another boiler.

Great potential
Looking ahead, Wedel hopes to see more structures connected to the Prince George Downtown Renewable Energy System in five to 10 years, as awareness of the system and its benefits grows. In fact, Prince George began expanding the system in May this year to serve the city’s new parkade and a future new pool.

Despite the many benefits of this system, Prince George is one of few cities in Canada that has a district energy system using a renewable fuel source. Wedel thinks this is partly because of Canada’s plentiful supply of natural gas and other sources of energy. But things are changing.

“I think now we’re starting to look at things and say, ‘Okay, rather than just having another waste product, what if we can turn that waste into dollars and cents in a different fashion?’ We’re definitely seeing that a lot more with every industry – waste management is trying to find ways to divert usable products from landfills and pure disposal, to provide us with additional resources,” Wedel says.

“It’s looking at all of these things as a complete circle, rather just the end of the line,” he adds. To encourage more district energy systems in Canada, Wedel says more awareness and incentives are needed. He also thinks Canadian municipalities need to look closer at the European experience with district energy.

In 2018, the Canadian Bioeconomy Conference and Exhibition presented a delegation from Växjö, Sweden.

“Växjö has about the same population as Prince George, but while we have nearly a dozen buildings connected to a biomass energy system, they have about 8,500,” Wedel says.

“Initially, development of the system in Växjö was a big decision, but once they started to build the industry further, they started to realize it actually saves money and it actually spawns additional manufacturing industry and resources based on that system. The costs started to go down and public acceptance went up,” he elaborates.

“Once it becomes more of a mainstream thing, it does become a lot more economically feasible for us to move in this direction.”

And it looks like more cities in Canada are seeing the potential of district energy.

In B.C., Quesnel and Williams Lake are looking into district energy systems. Quesnel is exploring the possibility of getting heat from the sawmills in their area that already have boiler systems providing heat for their own purposes, Wedel shares.

But the development of district energy systems depends on municipalities’ locations and resources they can tap into.

It’s optimal for “those locations that have mills or resources that are within close proximity, so we’re minimizing trucking or the length of the piping network,” Wedel explains. The proximity and density of buildings with significant, year-round heating demand is another consideration.

Overall, Wedel says the potential for district energy systems – and the Prince George Renewable Downtown System in particular – is great.

“Some people think that using wood for energy is not the best thing, but we’ve found that it can be very beneficial,” he says. “It has been a real accomplishment for Prince George to significantly reduce our GHG emissions while supporting such an important local industry and keeping our energy dollars local.”