Features Pellets
A plan with Merritt 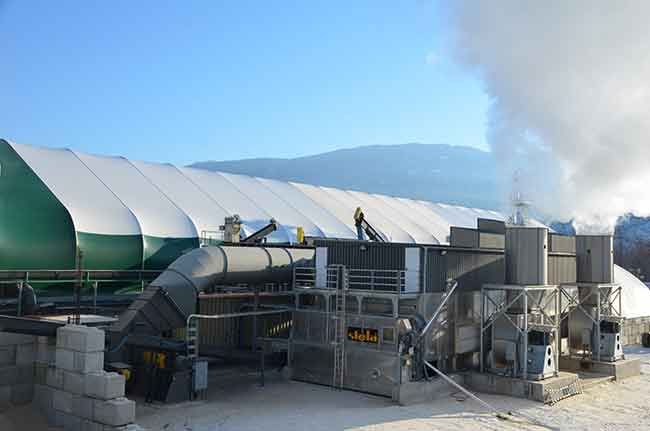 A primary issue with the pellet plant was that there was no drying capacity on site at the time of the purchase. Ericsson had purchased a dryer for the Vancouver operation Jerry Ericsson never had any intention of producing white wood pellets.

The president of Diacarbon Energy was working on his PhD from Simon Fraser University when he and his father started looking at opportunities in bioenergy.

“We were looking at materials that could be developed out of thermochemical processes,” Ericsson says. “We actually won some money from the B.C. Innovation Council to develop a business plan and, in doing so, we determined that bioenergy had greater opportunities than advanced materials at that time.”

It was the idea of creating second-generation biomass, torrefied pellets, that caught Ericsson’s attention and it became the focus of the business that he began to create. So he moved forward by raising some capital and teaming with a handful of other inventors and engineers to work on a pilot-scale system for production.

Over the course of three to four years, Ericsson continued to refine the process by developing more materials with different feedstocks, investigate ways to scale up the technology, as well as attempt to interest larger capital and corporate partners in an effort to attract off-take agreements for the advanced biomass.

“We did a 50-ton trial with a major cement company and that led to purchase commitments from two cement companies for about 80,000 tonnes per year,” explains Ericsson. “From there we were able to raise more capital and conduct about two more years of research and development work at our lab in Burnaby.”

With the successful trial completed and a demonstrated market for the Diacarbon product established, the company was prepared to begin construction of a commercial-scale demonstration production plant in the Vancouver area.

Along came Merritt
Just 270 km northeast of Vancouver along the Trans-Canada Highway sits the community of Merritt, a small resource town at the bottom of a mountain valley that approximately 7,500 people call home. Within the friendly confines of the community sits a pellet plant, originally owned and operated by the Highland Pellet Company.

The mill opened in the spring of 2011, but after a very short time in operation, the mill was shut down with no plan for re-opening. The plant fell into receivership and was put on the auction block.

It just so happened that the Merritt plant went up for sale around the same time that Diacarbon was preparing to execute its plan for its commercial-scale facility, and two of the company’s investors were in a position to purchase the plant.

“We were setting up our facility in Vancouver,” Ericsson     explains. “Everything was engineered for higher moistures and the climate there. We had purchased equipment from Germany,
Denmark and the United States, the most state-of-the-art, high-efficiency and low emissions products we could get.”

Instead, Ericsson and his team packed up the equipment and moved northeast to Merritt to set up the operation, one that would include a white wood pellet operation.

With a strong team of technical and engineering professionals already in place, and an excellent skilled labour force both in Merritt and in nearby communities, Diacarbon got to work on both restarting the white wood pellet production and installing the equipment for the original commercial-scale advanced biomass production facility.

In May of 2014, the team got to work. Diacarbon used approximately 40 staff during the construction and ramp-up of the pellet mill. They took advantage of a recent contraction in local labour markets to hire a highly effective team of tradespeople, skilled labourers and general construction workers.

Right from the beginning, the project posed some significant challenges that had to be overcome quickly to get the operation up and running.

“We didn’t make all of the decisions; we had to live with a lot of what had been done before,” Ericsson says. “They didn’t have a dryer, that was one of the main challenges we faced. We happened to have a dryer that was originally for higher moisture fibre, so we had capacity we could loan to the white pellet line. So there were challenges around integrating equipment that was not necessarily purpose-designed for the mill.”

In addition, there were the typical bumps and bruises along the way. Similar to what was experienced at Scotia Atlantic Biomass in Nova Scotia, Diacarbon had to work through each process to find where repairs had to be made, inefficiencies had to be corrected, and further improvements could be targeted for future development.

Working out fibre, logistics
One of the greatest needs facing the company upon purchasing the Merritt pellet mill was to establish fibre in-take agreements and cement both the logistics chain for moving pellets and a customer base for the product.

For fibre, Ericsson just needed to look across his property to find all of the residuals needed for pellet production. He was able to strike a deal with Aspen Planers, a sawmill that sits less than one kilometre from the pellet plant. The fibre is trucked over daily from the sawmill to the pellet plant, providing freshly-
sawn chips and sawdust for use in pellet production.

In case of a shutdown, Ericsson was able to secure a piece of property a few minutes outside of town where the company could establish a surge pile. That surge pile contains upwards of 400 truckloads of chips and sawdust at any given time, enough to cover two to three weeks of production should the mill need to halt production for repairs or maintenance.

The primary logistics challenge for Merritt is that there is no rail access to the community. Thankfully, there is a solution within a short distance that could fill the need.

“There is no rail access in Merritt, but we do have customers that accept our product by rail,” Ericsson says. “So we ship our pellets in grain trucks to a rail yard in Kamloops (85 km NNE) and then it goes both east and west to the ports.”

Pellets travelling east by rail are shipped to American customers through a reload facility in New Jersey state. For pellets travelling to Europe, rail loads are taken to Fibreco in Vancouver where they are co-mingled and loaded into large marine vessels. Diacarbon also ships smaller quantities of pellets to customers in Korea and Singapore, which are loaded at the plant into one-ton bags and shipped through a different location at the Port of Vancouver.

Shifting focus
With the white wood pellet production nearing capacity, and the bugs and kinks of the system worked out, Ericsson is now able to shift the corporate focus back to the original plan – the production of second-generation black pellets.

As the company continues to scale up its technology, moving from lab-scale to commercial-scale production volumes, they have encountered a series of challenges not unique to a project of this scale and significance.

“Engineering a new, first-of-its-kind process is very challenging,” Ericsson says. “I am constantly asking myself, ‘Can I make a lot of it, can I make it an attractive product, can I afford my equipment?’ These are the challenges we constantly balance.”

But the challenge is nearing its payoff.

As we went to press, Ericsson suggested that the project is just a few months away from completion. By the third quarter of 2016, the plant should be producing commercial-scale volumes that can be supplied as part of the off-take agreement with its cement company partner, Lafarge Cement Canada Ltd.

A primary issue with the pellet plant was that there was no drying capacity on site at the time of the purchase. Ericsson had purchased a dryer for the Vancouver operation

Opportunities await
The opportunities that come with the success of the advanced biomass system in Merritt are already starting to pile up.

In 2015, Diacarbon was selected as the preferred proponent for a Request for Proposals (RFP) submitted to BC Hydro for the Site C Clean energy project in regards to alternative energy and utilization of non-merchantable wood fibre generated by the land clearing activities. Ericsson stated that there are also multiple projects in the early stages of development in the U.S., and there is legwork already being done in response to the announcement that Alberta will look to halt energy-generation from coal.

Closer to home, Diacarbon is already in the process of expanding its white wood pellet line, adding a third pelletizer to increase production by approximately 25,000 tonnes per year at capacity.

Ericsson credits the regulatory environment in place in British Columbia as part of the reason why his company is able to move forward with these initiatives.

“B.C. is one of the best places in the world to start this project because we have a carbon tax here that has been around long enough for people to get used to it,” Ericsson says. “It creates a local domestic market, which reduces a lot of the logistics challenges. For us to run a truck 45 minutes east or two-and-a-half hours west, we have a lot of control over the logistics.”

Should Ericsson be successful in his commercial-scale production of second-generation pellets, Diacarbon Energy would become the first company in Canada to successfully do so. And they will have done so while re-establishing an important source for white wood pellets in the B.C. Interior.

A coal alternative
Ontario has already laid the groundwork for the replacement of coal using advanced biomass thanks to its Thunder Bay Generating Station project. That plant needed just $5 million to convert it from coal to advanced biomass fuel, versus the $190 million needed to convert the Atikokan station to white wood pellets.

On Nov. 30, 2015, the Government of Alberta announced that it would switch 30 per cent of its power generation to renewable energy by the year 2030. And while the expectation is that much of the capacity will be filled by solar, wind and natural gas resources, the domestic development of the advanced biomass industry could provide a real alternative to massive tracts of land filled with solar panels and wind turbines.

With Diacarbon close to commercial-scale production, replicating their technology for use as a coal alternative in Alberta could be a real option for the company. Ericsson provided his thoughts: “We offer a renewable alternative to coal. It burns at the same temperature as coal, and it requires very little changes to the system – far less changes than wood pellets or wood chips. They have a lot of assets that burn coal. They are going to need to convert them and use our product or lose the asset. I would think that we offer a bridge for Alberta.”