Sept. 28, 2018 - Spring 2018 saw a new milestone come to life for Pinnacle Renewable Energy Inc. as it opened a new facility in central Alberta, a first for the B.C.-based company that produces industrial wood pellets. 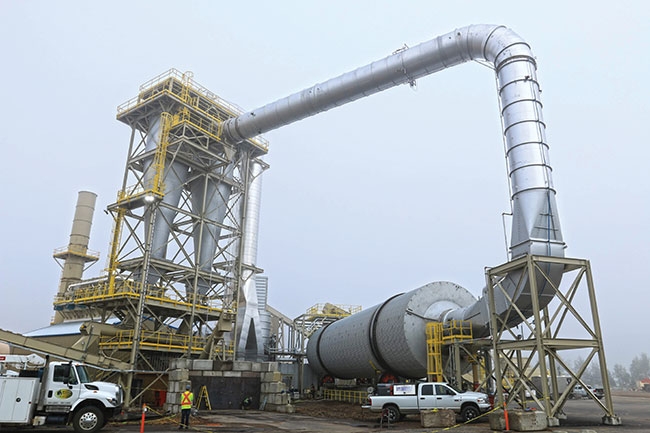 The facility, located roughly 100 kilometres west of Edmonton, sits near the community of Entwistle, a small hamlet in Parkland County at the Yellowhead Highway’s intersection with Highway 22/Highway 16A.

This is the first time the 29-year-old company has expanded its production outside of British Columbia, where it currently operates six production plants, has a seventh under construction (Smithers), and uses two shipping terminals, one of which is fully owned and operated by Pinnacle (Westview in Prince Rupert).

According to Scott Bax, Pinnacle’s senior vice-president of operations, the new facility fits perfectly with the needs of the company and takes advantage of the province’s healthy forest industry.

“We saw a surplus of sawmill residuals in the province, and specifically in this area,” he explains of the decision to move into Alberta. “Where you see a surplus of residuals you often find stockpiles because sawmills don’t have a consistent home to get rid of them.

“So basically, we saw an opportunity,” adds Bax.

One of Pinnacle’s largest production facilities, the new plant is strategically located on a CN railway for the efficient transportation of the product, as well as close to key fibre suppliers, such as Weyerhaeuser and West Fraser.

Although the plant initially started off utilizing only dry-shavings during the first quarter of 2018, by the time the facility reaches capacity it will also be making use of sawdust and hog to produce their six-millimetre white pellets.

The new facility, currently operating at roughly 50 per cent capacity, is expected to produce more than 180,000 metric tonnes this year.

Once at full capacity it will produce 400,000 metric tonnes, which the company expects to see by the second quarter of 2019.

New facility, new features
A $92-million investment by Pinnacle, the new greenfield production facility features many of the same standard pieces of equipment found in other Pinnacle plants, such as the Grizzly Mill Hog by Brunette Machinery, 10 Andritz LM26 II pelletizing machines, four hammer mills by Bliss Industrial LLC, as well as rail bins for storage.

As with any new facility, Pinnacle made sure to take advantage of the opportunity to introduce new features to the Entwistle plant, some of which are predominant and striking for the 14,000 square-foot facility.

“One thing that really stands out is the storage silo, it’s by far the largest of all our plants,” Bax says. “I’d say significantly larger at 12,000 metric tonnes, our other biggest silo would be around 3,000.”

According to Bax, this new feature helps to alleviate the number of trips needed to deliver product to Pinnacle’s shipping port, something that’s important for the company as the distance between production and export grows as they develop further east.

“The concept here is that as opposed to regular CN service, where they’re taking 15 to 20 cars at a time, we can load an entire string of 90 to 100 cars and CN takes them all directly to Prince Rupert where they get unloaded and then immediately brought back,” he explains.

By doing this Bax says the company is able to save additional funds when it comes to shipping, something the company already works hard to do as train service is mandatory at all of its facilities and is currently the only way they ship their product to port.

These cost-saving initiatives also brought about another big change for the facility as it reduced the number of dryers in operation and opted to go with a much larger unit.

“We only have a single dryer here,” Bax says of the system supplied by TSI. “We chose not to go with two smaller ones, like you would see in our other plants. We’ve had such great reliability out of our dryers so when we looked at the best way to allocate our capital resources we saw that our plants are rarely ever down because of dryer issues so we were confident that we could make that decision.”

The dryer system is also the first for Pinnacle to use a step grate furnace. Bax says every aspect of the facility’s construction was carefully planned to ensure it was as cost effective and energy efficient as possible.

“We put a fair amount of time and energy into designing our plants,” Bax says, explaining that every design helps to make new facilities better, but can also help to find ways to improve those built previously. Nowhere is that more important than when it comes to safety, he says.

“One of the new things that we’ve done is include flameless vents to a number of our conveyors after the dryer. They’re made by a company called CV Technology and basically, should there ever be a deflagration, the vents prevent it from getting bigger and processes the energy until just some residual smoke comes out,” he explains.

“It’s great technology and something that we’re really proud of having as part of our process,” Bax says, adding that the company has already begun retrofitting all its other facilities with the new tech.

Safety means success
Dedicated to the safety of its facility and its staff, Pinnacle goes far beyond everyday safety practices and features to ensure their plants operate smoothly.

From preventative maintenance inspections every eight to 12 hours, to specialized training, regular shutdowns for maintenance, as well as open and honest dialogue between all levels of staff, Pinnacle built its Entwistle plant around Owning Safety — a program that not only educates but also creates a culture within the facility.

“We’ve had phenomenal buy-in from employees,” Bax says, explaining how the company has seen their safety initiative transform its workplace.

“We’ve had a significant reduction in our lost time, accident and medical instances rates, but I think in general we’ve improved our retention,” he says. “So we’re losing fewer employees and our plants run better because there are fewer upset conditions. So it’s had a number of really phenomenal ripple effects that really goes to show that the term ‘safety pays’ is really true.”

With a full-time staff of 40 people, as well as up to 35 contractors that assist with maintenance, this same safety-to-success sentiment can be found on site at Entwistle and demonstrates how the program has really helped the company grow.

“If you define success by being safe then at the end of the day we can say ‘yes we are very successful’ and the rest will come,” says Marcus Ziesman, plant manager of the Entwistle facility. “If you establish that mindset and do it safely first it will automatically lead to performance improvements.

“That’s exactly what we’ve seen happen, a moderate up curve over the last month and a half, really just ramping up very nicely,” Ziesman says. “At the end of the day people understand their place, the risks, and the hazards, but also know the exact systems in place and are trained and competent. That’s how we define success here.”

Introduced in 2015, Owning Safety was the answer to a question that many pellet plants had surrounding occupational hazards. The internally created program forced Pinnacle to pinpoint its deficiencies and make the necessary changes to improve their safety record, but also their day-to-day operations.

The benefit of this plan is perfectly demonstrated in 2018 alone with the company already seeing great success with its new production facility in Entwistle, as well as the redevelopment of a particleboard plant in Smithers, and initial public offering of its parent company, Pinnacle Renewable Holdings Inc., on the Toronto Stock Exchange.

One of the world’s top pellet manufacturers, Pinnacle Renewable Energy Inc. produces roughly 1.5 million metric tonnes of product a year and has multiple long-term take-or-pay contracts with utilities in the U.K., Europe and Asia.

In Canada, however, the company currently only sells to domestic consumers, as the industrial market is nowhere near as strong as it is throughout Europe and Asia. According to Bax, who says the Entwistle plant was designed to allow for future expansion, the company hopes that some of that future growth will be due to an upswing in the Canadian market.

“We look forward to the day that a utility wants to reduce its carbon footprint, burn wood pellets and catch up with some of the other countries that are definitely more environmentally progressive,” he says. “The opportunities here would mean we don’t have to ship the product around the world to create that benefit that wood pellets can create from a power generation perspective.”

“We try to be vocal in the provinces of Alberta, B.C., and across Canada on seeing pellets as part of that sustainable energy solution for society’s needs,” Bax says.

Currently, it is estimated that Pinnacle’s product contributes more than one per cent of the total electricity produced in the U.K.