May 4, 2018 - On May 2 an Air Canada Airbus A320-200 aircraft flew from Edmonton to San Francisco with biofuel, the company announced. The flight was scheduled for the trade mission delegation led by the Alberta government, the City of Edmonton and Edmonton-area businesses to California. 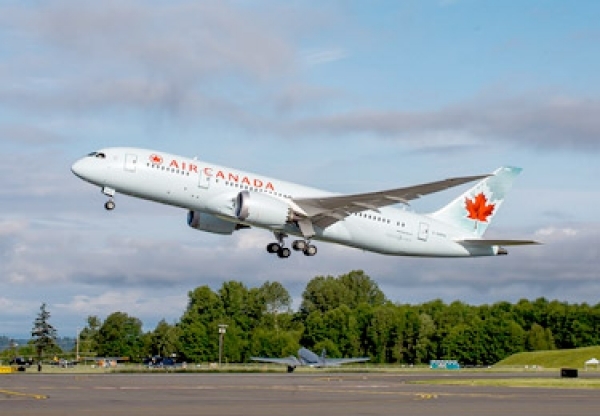 “Air Canada is proud to partner today with the Edmonton International Airport (EIA) to operate today’s flight with biofuel,” Teresa Ehman, director of environmental affairs at Air Canada, said in a news release on May 2. “Air Canada continues to support and advocate for the development of biofuel in Canada to become commercially viable; a big step towards creating more sustainable aviation in Canada and internationally. This is our eighth biofuel-operated flight since 2012. The result of today’s biofuel use reduces this flight’s carbon emissions by over 10 tonnes, which represents a 20 per cent reduction in net carbon emissions for this flight.

“Since 1990, Air Canada has improved its fuel efficiency by 43 per cent. We have also committed to meet ambitious targets set by the International Air Transport Association, including carbon-neutral growth from 2020 and to reduce CO2 emissions by 50 per cent by 2050, relative to 2005 levels. These efforts and other green initiatives to increase efficiency and reduce waste were recognized by Air Transport World which earlier this year named Air Canada the Eco-Airline of the Year for 2018,” Ehman said.

“Dozens of Alberta businesses and organizations are joining us on today’s San Francisco flight, to help showcase our province’s potential abroad and create new jobs and opportunities at home,” said the Honourable Deron Bilous, Alberta Minister of Economic Development and Trade. “Using biofuel is an important reminder that, by working with partners like Air Canada and EIA, Alberta will continue to be the energy and environmental leader North America needs for the 21st century.”

“This commitment and use of cleaner energy shows corporate leadership which is integral to all of us working together to address climate change,” said Edmonton Mayor Don Iveson. “I hope it encourages other companies to follow suit so we can continue to accelerate leadership on energy transition and climate change.”