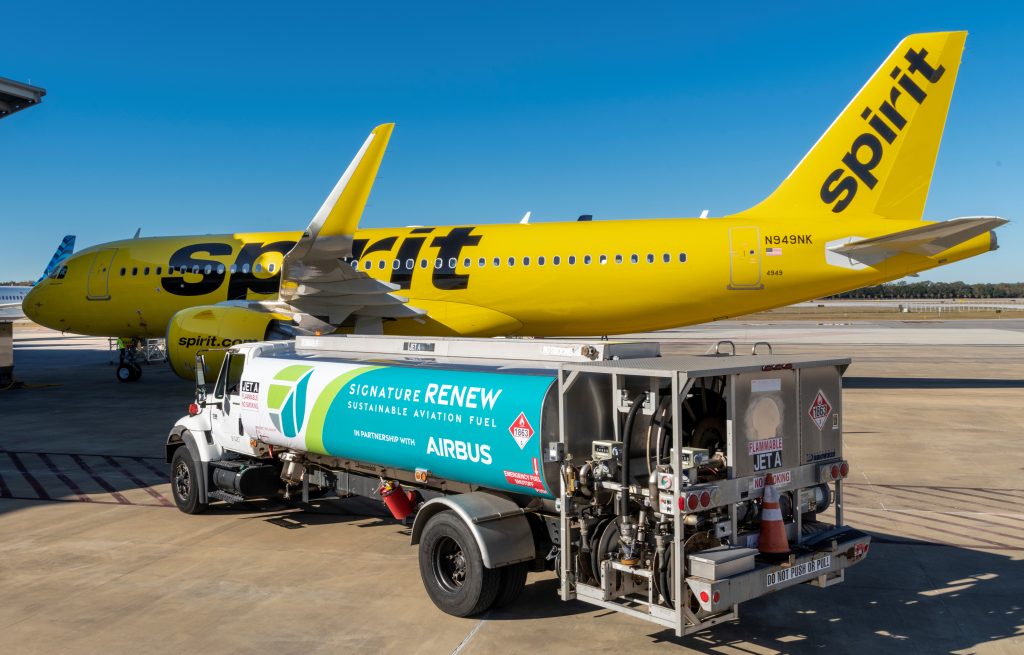 A recent fueling of an Airbus A320 with a sustainable aviation fuel (SAF) blend at Airbus’ Mobile, Alabama Final Assembly Line for delivery to Spirit Airlines. As part of Airbus’ ongoing commitment to sustainability in aviation, all aircraft delivered from its U.S. manufacturing facility will be fueled with a SAF blend on the delivery flight. Photo courtesy Airbus.

Airbus has begun delivery of all aircraft from its U.S. manufacturing facility here with a blend of U.S.-sourced sustainable aviation fuel (SAF) and conventional jet fuel. The initiative is a further step in Airbus’ ongoing commitment to carbon-neutral growth in the aviation sector, with a long-term goal of developing a zero carbon-producing commercial aircraft by 2035.

“Delivering every one of our Mobile-produced aircraft with SAF is an important, iterative step toward solving the carbon challenge,” said C. Jeffrey Knittel, chairman and CEO of Airbus Americas, Inc. In November, Airbus began delivering aircraft with a SAF blend to some of its customers, gradually ramping-up to encompass all deliveries from the Mobile final assembly line. Henceforth, every aircraft delivered from the Airbus US manufacturing site will have SAF on board.

“SAF is a positive contributor to enhanced sustainability in aviation since it enables up to an 80 per cent reduction of CO2 across the fuel lifecycle. We are committed to making sustainable aviation fuels an everyday reality with use on an increasingly larger scale, and this announcement is further evidence of that.”

Since the launch of this initiative, American Airlines, Breeze Airways, Delta Air Lines and Spirit Airlines have taken delivery of Airbus aircraft with SAF on board. The remainder of Airbus customer airlines will be added to this list in accordance with delivery schedules.

“We have reached an agreement with Signature Flight Support to supply SAF to our Mobile facility,” said Daryl Taylor, vice-president and general manager of the Mobile manufacturing site. “This initiative advances our commitment to reducing the carbon footprint of the aviation industry.”

Signature Flight Support is working in partnership with World Energy to provide the U.S.-sourced SAF to Airbus.

From its U.S. manufacturing facility in Mobile, Alabama, Airbus delivers both A220 and A320 Family aircraft to U.S.-based customers. Since 2016, the company has delivered 284 Airbus aircraft from Mobile.