Feb. 1, 2017 - Near the St. Lawrence River, a stone’s throw away from the Gentilly nuclear power plant, the old LaPrade mill in Bécancour, Que., has come back to life. In one of the old concrete pools designed to produce heavy water, Airex Energy is testing its unique torrefaction process. Their goal: develop a large-scale biochar technology made with forest biomass and agriculture waste. 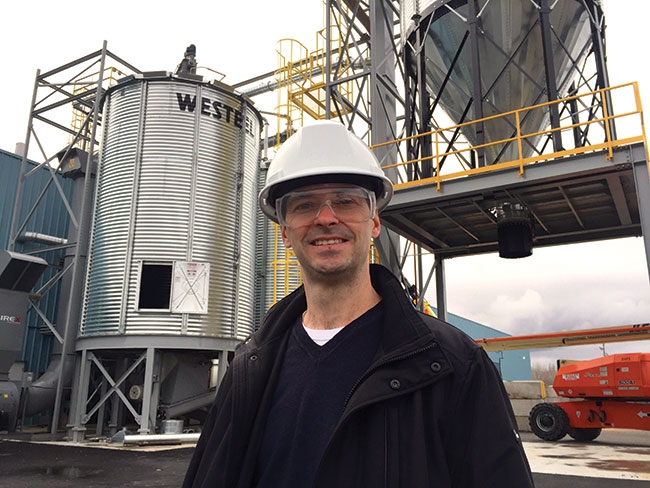 Much is at stake in this global renewable resource race against the clock to determine which player will develop the most efficient biochar production technology.

“At this moment, 40 per cent of the world’s power is produced from coal, a heavy greenhouse gas emitting source of energy. Since biochar has the same properties as coal while being carbon neutral, it could easily replace it without making big investments in thermal power stations,” explains Sylvain Bertrand, Airex Energy general manager.

After the biomass torrefaction pilot mill construction in 2011 in Laval, Que., Airex Energy, a dust extraction system manufacturer, recently built a $6.5 million demonstration unit designed to be a technology showcase with the help of financial partners. They aim to sell this patented technology worldwide, while producing 15,000 tons of green coal every year.

But how does it work? The sawmill residues – chips and sawdust – are heated at a high temperature in an oxygen-free environment. Without combustion, the wood moisture escapes and the matter is transformed, or decomposed, in green coal, a material with 35 per cent higher energy density than wood pellets. The biochar transport cost is thus lowered. The material being more brittle, the grinding process is also less energy intensive. The other advantage of biochar is that it is hydrophobic and can be stored outside.

“Our biochar stays only three seconds in the reactor,” Bertrand says.

This is the Carbon FX technology’s biggest strength. During the biomass decomposition process, the volatile compounds emitted are recovered and burned to produce heat reused in the process. “Once the process is started, the biochar production needs very little energy,” Bertrand says.

When the raw material reaches the 13,000 square foot mill it is sent in two big silos by conveyor. It allows some flexibility to store different materials such as sawdust, chips, agricultural or construction waste in different areas. A pulling screw under each silo then sends the material to the grinder. After, the matter is pre-dried to a 10 per cent moisture content, before being sent to the third silo. There, it enters a conditioning chamber where it is heated by indirect contact in a water vapour-saturated environment. The volatile compounds are recovered at that moment and burned in the combustion chamber.

The biomass is then carbonized at 450 C in cyclonic reactors. In this unique patented process, rotary valves block oxygen entry while levitation rings control precisely the particle transition in the reactor. When biochar leaves the reactor, it is densified from 200 kg/m3 to 700 km/m3. Green coal then goes through the chilling room, and leaves the mill before being stored in silos, ready for shipping. When the mill reaches full operation, two 30-ton trucks will be shipped every day.

“The nice thing about this technology is that it is the simplest and the most efficient on the market,” says Andrée-Lise Méthod, founder and associate director of Cycle Capital Management (CCM), the capital management fund behind the project.

CCM finances just one to two per cent of the projects they receive, but they believe so much in the energy-tech startup that they invested $1.75 million in the business.

Biochar, carbon neutral?
When using forest resources to produce energy, torrefied biomass is considered as being carbon neutral, which means it does not emit new greenhouse gases. “When we extract bituminous coal and burn it, the carbon in the matter is released in the atmosphere. It is a new source of carbon. The reality is, however, different with trees, because new trees grow after a forest is cut, thus absorbing new carbon,” explains Sylvain Bertrand.

The carbon neutral qualifier for biochar is not unanimous. Claude Villeneuve, a climate change expert at Université du Québec à Chicoutimi, explains, “Biomass can be considered as carbon neutral if many factors are respected. These factors include forest management, transportation, and process efficiency. This can be evaluated with lifecycle or carbon footprint analysis, where studies take into account all stages of the transformation process.”

This new source of energy is not without concerns; some worry it could encourage forest over-harvesting, which would disrupt ecosystems and biodiversity.

A wide variety of products
The Airex mill is very flexible when it comes down to the final product. Being able to modulate different parameters, like carbonization time, it can produce not only thermal biochar, but also activated biochar, a product used to filter water, gases, gold and other metals. Airex can also make biocoke, used as a reduction component in steel and silicium making industry, torrefied wood flour, used to manufacture composite material, or biochar intended to fertilize agricultural soils.

In North America, coal is still popular because it is a cheap fuel for thermal power stations. But things could change quickly as the fight against climate change grows. Alberta Premier Rachel Notley has announced the province’s intention to replace coal – currently producing 50 per cent of their electricity – with green energy sources. In Europe, many countries are already reducing their carbon footprint as well.

“The global context is very favourable to this new source of energy,” Bertrand says.

Across the country, newsprint decline makes it even more important for businesses to look for new ways to use forest residuals. At the moment, the fibre market is in equilibrium, but it is hard to predict where it will go in coming years. “Biochar production could become an interesting market,” Bertrand says.