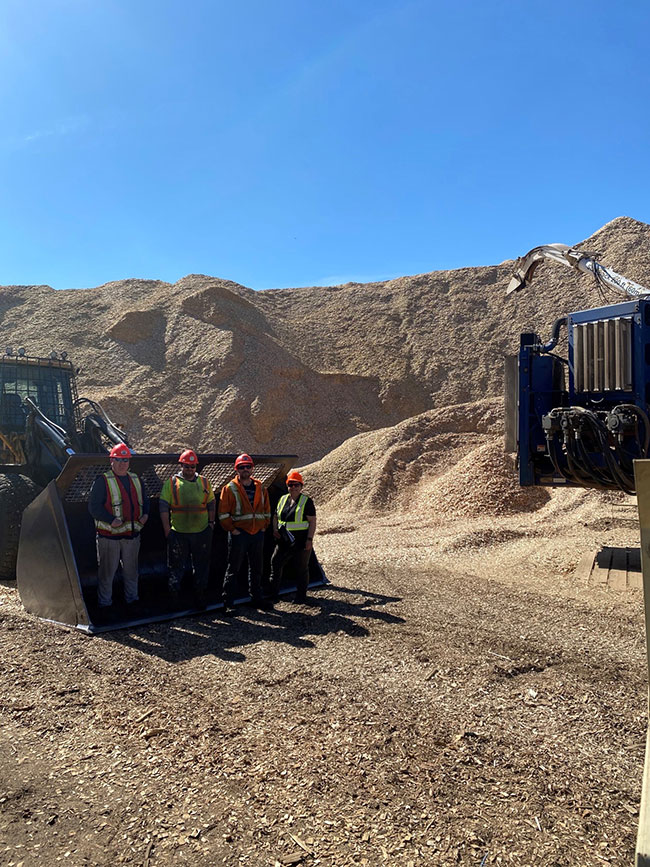 A four-month-long project in northeastern British Columbia – in which low-grade residual wood fibre was harvested for pellet production through funding from the Forest Enhancement Society of B.C. (FESBC) – could open the door for similar projects in the future.

FESBC provided $299,759 for the partnership project between Duz Cho Logging of the McLeod Lake Indian Band and Canfor Energy North. The companies’ joint proposal was approved last November to begin the project, and work concluded in late March.

The purpose of the project was to utilize leftover low-grade fibre from harvesting operations in the Chetwynd, B.C., area – residuals that would otherwise be piled and burned – and use it for pellet and energy production.

“We collectively could envision how it might be a catalyst for more of this kind of work in the northeast region of B.C.,” explains Ray Raatz, operations manager with FESBC, reflecting on the project’s proposal submission from Duz Cho and Canfor.

The recovery of such low-grade fibre is economically limited, but the funding from FESBC allowed the fibre to be hauled to the Canfor Energy North facility in Chetwynd, where it was chipped for use in pellet and energy production. The money made it possible for low-grade fibre to be recovered from a significant distance.

Without the funding, Canfor likely never would have embarked on the project, Don Rosen, the company’s woodlands manager for its Chetwynd Division, says.

“It’s something we really hadn’t done or had any experience with,” he explains. “It’s one thing to work it all out on a spreadsheet as to what you think it might cost, but it’s another thing to actually execute and do that stuff in reality. That really gave us the impetus to try to utilize that fibre and work through the full lifecycle cost and process, and see if we can actually produce a product we can utilize.”

Rosen says the project was important for several reasons, including its economic and environmental benefits.

“Not only was it an exceptional partnership with McLeod Lake Indian Band’s Duz Cho Logging partnership, but the FESBC funding was the impetus for our company to do more of this work as this was our first residuals utilization project in the bush,” he explains.

The project enabled Canfor to expand its capacity for what it can do in the future in utilizing fibre from its operations and creating new revenue streams.

“We also know there are downstream benefits of these projects for logging contractors and haulers/truckers,” Rosen says.

Duz Cho Logging assigned five of its employees to the Chetwynd site to do the chipping of the fibre, and enough work was created for upwards of 10 people.

Chris Hayward, Duz Cho Logging general manager, joined the project in February after it was already a couple of months underway. He says the project went “smooth” with the company’s crew and equipment.

“One of our core principles at Duz Cho is we ensure the footprints we leave behind are the ones our children will be proud to walk in, and this project was definitely in alignment,” he says. “The environmental benefits were significant because by avoiding pile burning, the result is fewer greenhouse gas emissions.”

The economic benefits were just as important, Hayward adds.

“We were able to provide employment for McLeod Lake Indian Band members,” he says. “Not only are these good-paying jobs to benefit our members and their families, but people have the opportunity to learn new skills while doing this hands-on work, which is important.”

Hayward also praised the efforts of FESBC in making the project possible.

“I think it’s great that FESBC did what they could to try to get funding for projects like this because it gave Canfor an opportunity to chip some of their waste right in the yard and use it as their own product,” he says.

Raatz suggests there may be additional opportunities for other projects of this kind that FESBC can support down the road.

“It’s all about the economic reach,” he says, adding the partnership between Canfor and Duz Cho allowed each of the parties to learn new efficiencies to help them venture further on their own.

“Our goal is increasing utilization of low-grade fibre and, as a result of that, reducing burning and thereby reducing greenhouse gas emissions,” Raatz adds.

Canfor had historically relied on sawmill residual fibre for its pellet plant, but wanted to determine how it could obtain material directly from its bush operation instead of relying on residuals from the sawmill.

“It was an opportunity in a sense to provide some funding to try this out,” Raatz says. “They (Canfor and Duz Cho) had a large proposal, and we were only able to fund a portion of what they were proposing, but it gave them an opportunity to get some learning about how to implement this type of project and some of the economics associated with it.”

Rosen says Canfor experimented a little bit with Duz Cho’s equipment, playing with some of the settings “to get a proper chip size and characteristics to work with our facility, and they were really good at accommodating us so that we could utilize that fibre.”

The Peterson chipper used during the project was supported by two Caterpillar wheel loaders – one equipped with a log grapple to forward wood to the chipper and another with a chip bucket that stacked the chips.

Rosen adds it was more of the chipping product that changed as opposed to the plant.

“We changed a little bit of the recipe and the blend to make that work through our facility,” he explains. “It was a really good opportunity to jump-start the utilization of that fibre and give us a better understanding of how it all works. That residual market is a very thin margin part of the business to be in.”

The project utilized 14,742 cubic metres of residual waste fibre, which is approximately equal to 295 truckloads.

“This project was a great opportunity for members of the McLeod Lake Indian Band to participate in a project that helps utilize more of the wood fibre being harvested within the traditional territories,” Hayward says. “We are creating a greener, more sustainable environment.”

Employees from both Duz Cho and Canfor contributed to the Chetwynd economy throughout the project’s duration, through fuel and food purchases and accommodations. Additionally, a number of local trades people were hired to maintain the project’s equipment.

“Our project showed true partnership,” Hayward adds. “So much happened behind the scenes in the planning and implementation, and from start to finish it was truly a collaboration – a project in support of each other for the benefit of many.”

The Duz Cho/Canfor project was one of 14 fibre utilization projects funded by FESBC in several regions of the province as part of British Columbia’s StrongerBC funding allocation. FESBC was allocated $3 million in total from the B.C. government for the StrongerBC economic recovery plan. •