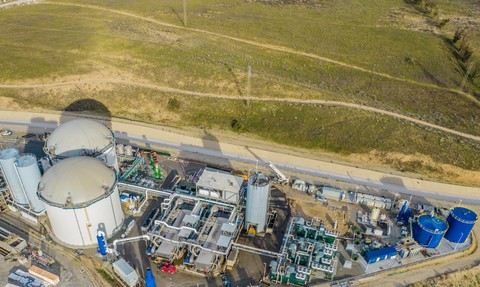 Ontario-based Anaergia Inc. announced that its Rialto Bioenergy Facility in Rialto, Calif., received the Distinction Award for Wastewater Project of the Year at the Global Water Awards 2022, one of the water industry’s most prominent international awards programs. The award was presented at a ceremony in Madrid, Spain, on Tuesday evening.

The Rialto Bioenergy Facility is a $185-million project built, owned, and operated by Anaergia. It is one of North America’s largest organics processing facilities, with the capacity to convert up to 1,000 tons per day of wastewater biosolids and landfill-diverted, organic waste into up to 985,000 MMBtu of renewable natural gas and agricultural fertilizer. By reducing the landfilling of organic waste and producing a carbon-negative fuel, the facility’s net carbon dioxide emissions reduction is approximately 220,000 metric tons annually – equivalent to taking 47,500 cars off the road.

“We are very proud that Rialto Bioenergy Facility has received this global recognition, demonstrating Anaergia’s world-leading capability to deliver sustainable wastewater and waste infrastructure of the 21st century, and helping utilities convert their biosolids into resources and reduce their carbon footprint,” said Andrew Benedek, Anaergia’s chairman and CEO. “Far too much of the world’s wastewater sludge, food scraps and other organic waste is allowed to rot in landfills, producing methane that escapes and adds significantly to global warming. By converting organic waste to a carbon-negative renewable fuel and high-quality fertilizer, we are not only reducing planet-warming methane emissions, we are also replacing fossil fuels with a renewable fuel and improving the health of the earth’s soil.”

With California law now requiring the diversion of 75 per cent of organic wastes from landfills by 2025, the plant will serve as a replicable reference for years to come as cities and utilities work to achieve carbon neutrality goals.