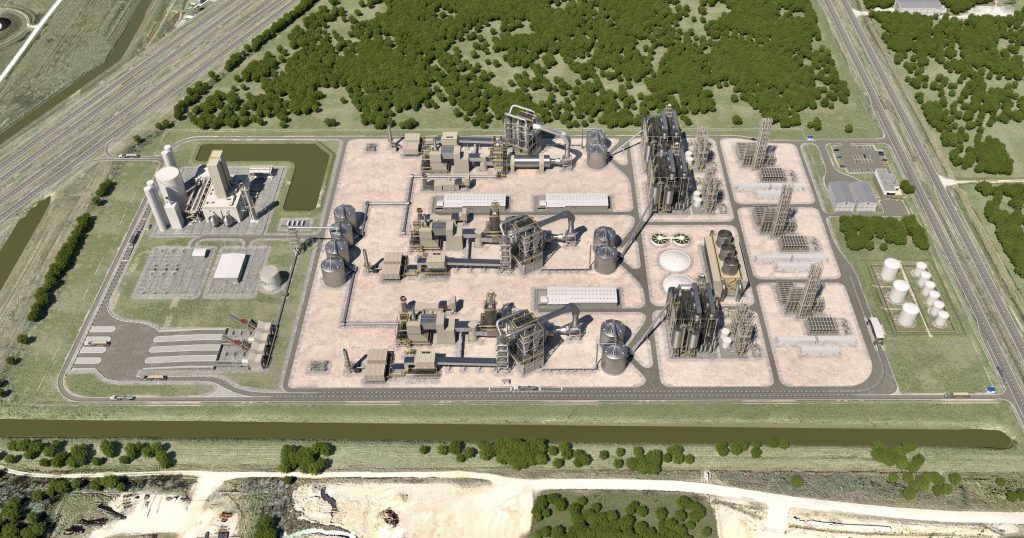 Rendering of an Arbor Gas renewable fuels facility being developed in Beaumont, Texas. Arbor Gas expects to begin construction on a similar project in Louisiana in late 2023. Photo: Arbor Gas

Operating as Magnolia Renewable Fuels LLC, the new facility would produce renewable gasoline from wood waste biomass sourced from Louisiana and Mississippi timber operations. The project would create 32 new direct jobs with average annual salaries of $99,000, plus benefits. Louisiana Economic Development estimates the project would also support at least 110 indirect jobs, for a total of 142 new jobs in Louisiana’s Capital Region. The company estimates development of the facility would generate up to 880 construction jobs at peak construction.

“The level of support and engagement we’ve received from the folks at the Baton Rouge Area Chamber, West Baton Rouge Chamber, the local community and officials, and the state has been incredible,” Arbor Gas CEO Timothy Vail said. “At full capacity, this plant will have a production capacity of 2,000 barrels per day of renewable gasoline with the potential for further expansion. The product would be blended with conventional gasoline to achieve renewable fuel standards in the U.S. and Europe.”

Initial plans call for the installation of two product trains, with the capacity for future expansions. Arbor Gas projects that each train will sequester approximately 275,000 tons of CO2 annually. Construction is expected to begin in late 2023, with the first train in operation by the end of 2025.

“The Baton Rouge Area is rising up as the global epicenter for renewable and transitional energy investments,” said Adam Knapp, Baton Rouge Area Chamber president and CEO. “Since 2020, the Capital Region has seen over $18.5 billion in announced or considered investments. The industrial sector is moving toward net zero carbon emissions in manufacturing. We applaud Arbor Gas as the latest to recognize the unique advantages for energy transition business development in Louisiana and the Capital Region.”

To secure the Arbor Gas project in West Baton Rouge Parish, the State of Louisiana offered the company a competitive incentive package that includes the services of LED FastStart, the No.1 ranked statewide workforce development program in the U.S. for the past 12 years. The company is also expected to utilize the state’s Quality Jobs and Industrial Tax Exemption programs.

“Renewable energy is a key component in reaching environmental protection targets, and we look forward to welcoming the latest renewable fuel investment to our community,” West Baton Rouge Parish President Riley Berthelot, Jr. said. “Our goal is for West Baton Rouge to be one the energy powerhouses of the world, and we will continue to keep growing in this vital industry that is important to our economy. We are proud of the progress we have made to deliver clean, reliable energy to Louisiana, and we’re excited to ‘rethink’ energy to deliver progressive solutions into a rapidly growing market.”