August 13, 2013 - Technology tours were the highlight for many of the 120 people who registered to take part in the first-ever Atlantic Biorefinery Conference, which took place from May 27 to 29 in Edmundston, N.B. 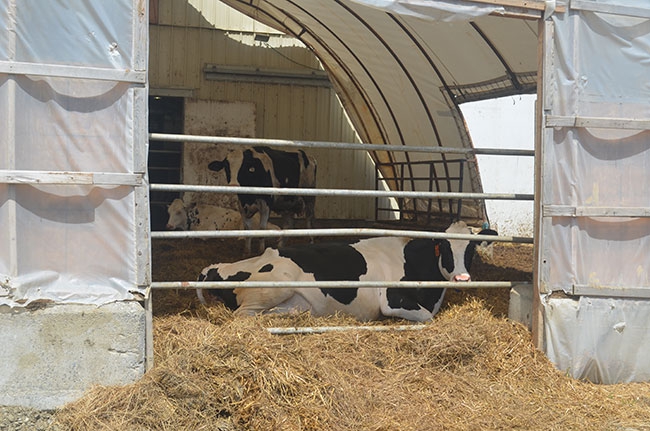 LaForge Bioenvironmental’s 1.6 MWh anaerobic digester operates on a dairy farm with approximately 90 cows Technology tours were the highlight for many of the 120 people who registered to take part in the first-ever Atlantic Biorefinery Conference

Attendees were treated to tours of bioproduct producing facilities, including a tour by Groupe Savoie, a major employer in northern New Brunswick.

Groupe Savoie employs more than 600 people with the majority of its operations in northern New Brunswick, where it has felling rights over a vast expanse of hardwood forest. The company’s industrial facilities include two sawmills, a pallet plant, a component plant, a pellet plant and dry kilns in Saint-Quentin, N.B.; a component plant and a dry kiln in Kedgwick, N.B.; a pallet production and recycling plant in Moncton, N.B.; and a sawmill in Westville, N.S.

The company’s tour consisted of its CHEP pallet manufacturing facility and its pellet plant operations in Saint-Quentin, N.B.

Groupe Savoie began its pellet production in 2010, producing 42,000 tonnes of pellets per year, with the majority being shipped to the U.K. for industrial purposes. The company currently produces 70,000 tonnes of pellets annually for use domestically and overseas, and plans to produce an additional 20,000 tonnes, or more, after the plant completes the installation of its new burner.

Groupe Savoie recently decided to double its domestic pellet plant production and offer a fifty-fifty split between domestic pellets for residential use and exported products for industrial applications, and shut down the pellet plant in June so it could install a new burner to reduce a bottleneck in the production process, according to Jonathan Levesque, the company’s vice-president of marketing and development.

The company’s decision to increase domestic production stemmed from a shortage of available wood pellets for domestic heating last winter. To assist in the domestic side of the business, the company also invested in a vacuum delivery truck.

Another stop during the technology tours was in Saint-André, N.B., where attendees were able to tour LaForge Bioenvironmental’s commercial biogas production plant.

The facility operates a 1.6 MWh anaerobic digester on a dairy farm with approximately 90 cows, and is fuelled by a combination of cow manure and organic waste from regional food processors converting it to electrical energy, heat and liquid organic fertilizer.

Attendees also got to listen to a variety of presentations during the conference from professionals within the biomass industry, including how to become eligible for the Scientific Research and Experimental Development program, a federal tax incentive program for research and development in Canada that will lead to new, improved or technologically advanced products or processes.

A Canadian-controlled private corporation can earn refundable investment tax credits of 35 per cent, up to the first $2 million of qualified expenditures for SR&ED carried out in Canada, and 20 per cent on any excess amount, according to the “Opportunities New Brunswick” section of province’s website.

The topic was presented by Remi Fortin of Raymond Chabot Grant Thornton, an accounting firm out of Que.

Fortin explained that there are five criteria that must be met to become eligible for the SR&ED program. The criteria are:

Other highlights from the conference included tabletop exhibits, poster abstracts and an industry-research connector social event.