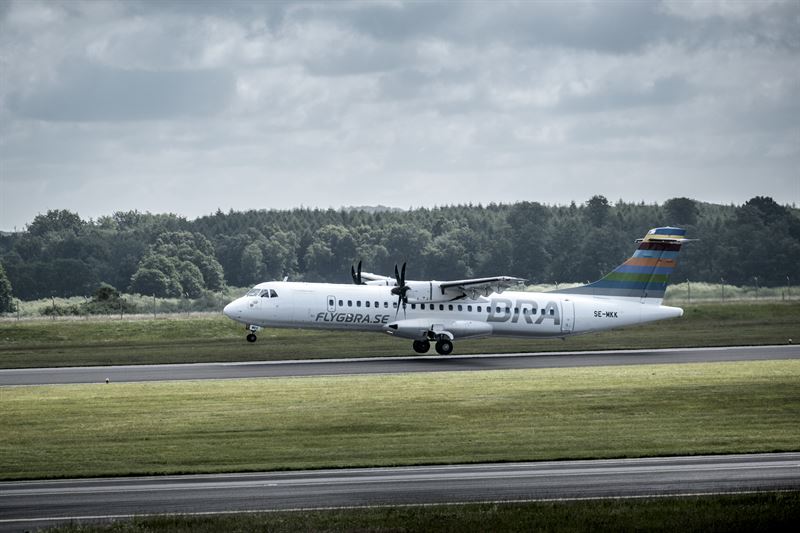 The test flight further supports aviation’s decarbonisation targets and acceleration of SAF certification. When used in neat form Neste MY Sustainable Aviation Fuel reduces greenhouse gas emissions over its life cycle by up to 80 per cent compared to fossil jet fuel use.

This historic test flight took place in Sweden and is part of the 100 per cent SAF-certification process of ATR aircraft that started in September 2021 in co-operation with Braathens and Neste and should be completed by 2025. It has been the latest in a series of successful ground and flight tests on the ATR 72-600 prototype aircraft performed at the beginning of 2022, including flights with 100 per cent SAF in one engine, and today was the first time it was done with 100 per cent SAF in two engines.

ATR CEO Stefano Bortoli, said: “Today is a historic day for aviation. After more than a century of commercial flights powered by kerosene, we are at the dawn of a new era. In recent months, we carried out a series of successful flights with sustainable aviation fuel in one engine. We now decided it was time to perform the first test flight with 100 per cent SAF in both engines. This helps us to certify our aircraft to fly solely on sustainable aviation fuels faster and to enable more sustainable connections as a result. The flight represents a true milestone for the entire aviation industry as it shows that this technology works and can be promptly adopted by many in our industry to speed up the transition to low-emission aviation.”

“SAF plays a key role in achieving aviation’s emission reduction goals,” said Jonathan Wood, Neste’s vice-president Europe, renewable aviation. “When used in neat form, at 100 per cent concentration as on this test flight, Neste MY Sustainable Aviation Fuel reduces greenhouse gas emissions over its life cycle by up to 80 per cent compared to fossil jet fuel use, and provides additionally non-CO2 benefits through significantly reduced particulate emissions, among others. As a drop-in fuel, it can be used in existing aircraft engines and is compatible with current airport fuel infrastructure. Test flights like this show it is possible to safely fly on 100% SAF and help accelerate the adoption of SAF in aviation.”

Per G Braathen, chairman of Braathens Regional Airlines stated: “As a leading Swedish domestic airline, our sustainability focus started long before any other airline, and this milestone is one of the main pillars and represents a real innovation for the industry. It proved that 100 per cent SAF is the most immediate and effective option we have to reduce CO2 emissions and move faster to a decarbonized industry.”

Achieving the milestone was also made possible by Swedavia enabling the SAF to be uplifted to the ATR aircraft at Malmö airport and Pratt & Whitney, closely working together with ATR and Braathens in the preparations of this milestone flight.

“This milestone affirms the opportunity that SAF plays in the aviation industry and is indicative of the strong commitment Pratt & Whitney has made to powering more sustainable aviation,” said Maria Della Posta, president of Pratt & Whitney Canada. “We have worked closely with ATR and Braathens to ensure today’s successful flight test with 100 per cent SAF.”

Today’s flight is proof that speeding up the transition to net-zero carbon emissions can only be achieved when all stakeholders within aviation work closely together. It is a milestone not just for Sweden but globally showing that the technology is available and has significant benefits to aviation, today and in the future.

Chief ATR pilot Cyril Cizabuiroz, Jean-Marie Marre, co-pilot, and Pascal Daussin, flight test mechanic, flew the Braathens’ aircraft from Malmö a coastal city in southern Sweden to Bromma near Stockholm, which took around one hour and 20 minutes. The results of today’s flight will be analyzed and released at a later date.