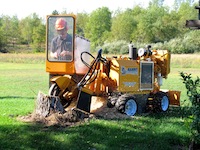 “The
Model 2550XP is a high production stump grinder that has the power to go after
large-scale projects or big stumps,” said Jason Morey, Bandit small equipment
sales manager. “Companies that spend a lot of time grinding stumps will really
enjoy this machine, as it can get just about anywhere, tackle just about any
sized stump, and it powers through them in no time. It also operates just as
smooth as our smaller 2250XP, and of course with no belts there is far less
downtime for maintenance.”

The
reduced maintenance comes from the high-power hydrostatic motor used to
directly power the cutter wheel with virtually no parasitic power loss. This
eliminates the need for a clutch, jackshaft, drive belt, belt-tensioning
system, and the many sheaves and bearings associated with those components.
This also allows the engine to be mounted lower and at the rear of the machine
for better balance. An optional four-wheel drive system is available for
exceptional all-terrain traction, and with standard flotation tires the Model
2550XP can harmlessly traverse delicate landscaping. Engine options range from
35 or 38-horsepower gasoline engines, or a pair of Kubota diesels with either
35 or 44 horsepower.

Once at
the job site, the 2550XP brings a 50-inch swing arc to cover a broad area,
reducing the need to reposition the machine at the stump. It cuts to a maximum
depth of 13.5 inches, and it features rubber chip curtains on both the
operator's console and the machine itself to aid in chip containment. A
standard swing-out operator's station provides the controls for the drive
system, cutter wheel swing, and up/down movements of the cutter head, while
also positioning the operator at a clear viewing angle to the grinding action.
An optional wireless remote control with a tether backup is available for
operators who prefer to be away from the machine. A hydraulic grading blade is
also available and recommended for assisting with cleanup after the stump is
removed.

“Having a
machine with the power to get through stumps quickly is important, but so is
reliability,” said Morey. “Regular stump grinders have come a long way in the last
10 years, and if you keep an eye on the belts they perform well. With the 2250
and now the 2550, we’ve taken a new step towards creating the ideal stump
grinder—one that has the power people need but doesn’t need quite so much
attention to maintenance. Changing or adjusting belts isn’t really hard, but
after using a beltless 2250 or 2550, you’ll wonder how you ever put up with
belts in the first place.”

The Model
2550XP is now in production and available for order.