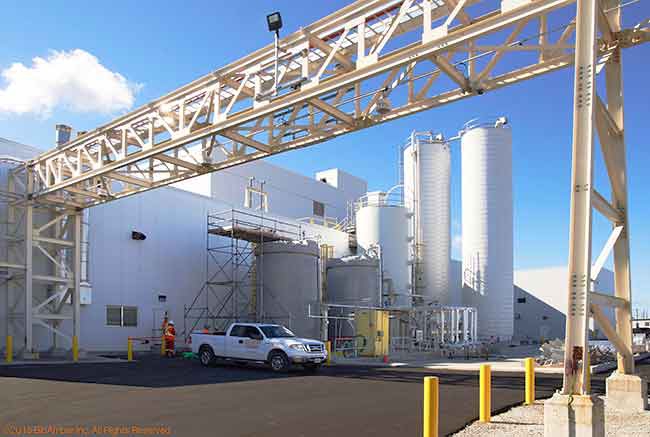 It was an event four years in the making.

Nearly four years to the day after announcing it had chosen Sarnia, Ont. for the site of its commercial scale plant, BioAmber welcomed the community to its completed bio-succinic acid production facility. After considering nearly 100 cities for the construction of the plant, the joint venture between BioAmber and Mitsui & Co. chose to be nestled into a place amongst the petrochemical giants that called the city on the shores of Lake Huron home.

The product
Bio-succinic acid is produced using glucose-based feedstocks supplied by the agriculture community. A proprietary yeast, kept on site in a freezer at -80 C, is the basis for the fermentation technology for creating the chemical.

The yeast fermentation process takes five days, and uses similar operating processes as the brewing of beer. The by-product of this process is spent yeast, a protein, which BioAmber is working on getting the approval to sell as feedstock. The final step of the process is the drying and crystallization, which takes place at a maximum temperature of 30˚C. The bio-succinic acid, in its solid form, is a white crystallized product similar in appearance to table salt.

The acid is used as a building block chemical in the creation of components for the electronics and automotive industries, as well as the creation of plastics, lubricants, coatings, paints and more.

The Sarnia factor
Every step of the process of getting the plant online has been positively impacted by its presence in Sarnia thus far.

For starters, the location of the plant is on a portion of a bioindustrial park owned by Lanxess, which produces synthetic rubber for butyl rubber. That location puts them next door to TransAlta, a company that produces by-products that can be used by BioAmber.

That solid cost structure was also evident in the construction of the plant. Being in a community with significant petrochemical infrastructure assets, finding a team with the skillset to build a biochemical facility was not as difficult as it may have been in some of the other discussed locations for the plant.

“Not having to bring in contractors that are hundreds of miles away has been a huge advantage as well,” explains Huc. “The workers here are experienced in building plants, building piping, a lot of steel work, all of the things that needed to get done at our site. The flawless execution we’ve had has been largely because of the labour pool that we’ve been able to draw on and the contractors we could draw on here in Sarnia.”

Another sector in Sarnia has taken notice to the work being done by BioAmber, and others, in the biochemical sector in the community and has made adjustments to provide additional support. That would be the post-secondary education sector, which includes the main campus of Lambton College and satellite operations of Western University.

“We have a number of young operators that are graduates of Lambton College,” says Huc. “Lambton is putting in place a robust program to meet the needs of this sector: fermentation, purification, different types of processes that are used in our industry. Western University has a fantastic R&D facility (in Sarnia). They have great incubator facilities.”

The emergence of BioAmber as a leader in the national biochemical sector should bode well for the entire community in the long-term, as the possibilities to grow the industry become even easier with the establishment of a successful business model, which BioAmber has so far maintained even in the wake of falling oil prices that hurt the company’s competitive edge.

“If we’re successful, it will make it that much easier for people to bet on the next technology,” says Luc.

The company’s actions in 2014 went a long way to securing that success. Within the first seven months of the year, while construction of the Sarnia plant was ongoing, the company was able to successfully negotiate three separate loans, worth a total of approximately $37 million from government organizations that had funding available: Agriculture Canada, Sustainable Development and Technology Canada and Export Development Canada. Within that same time period, the company signed take-or-pay contracts with two companies, covering 80 per cent of the at-capacity total production volume or approximately 24,000 MT. Lastly, BioAmber announced a successful secondary public offering of 2.8 million shares of common stock.

Looking ahead
As the company ramps up production towards the at-capacity production goal of 30,000 MT per year, the prospects grow for future development of additional industry assets in and around Sarnia.

“I am very excited about the prospect of downstream investment,” says Huc. “Once you’re making the basic building blocks for polymers, for foams, for various products here, it makes a lot less sense to take those building blocks and ship them halfway around the world to create a polyol, polyurethane or an injected-molded product and then ship it all the way back here.”

And as BioAmber progresses towards capacity production, targeted for the end of 2017,  Huc’s excitement for what comes next in the region continues to grow.

“I’m expecting over the next 10-15 years, we start to produce these building block chemicals from renewable sugars grown in this region, you’re going to find that people will start to build these biodegradable plastic plants next door.”

What once was fantasy, the emergence of a homegrown biochemical sector in the heart of Ontario’s petrochemical hub, may soon become reality thanks, in part, to BioAmber.