Feb. 12, 2018 - Natural gas pipelines that crisscross the Edmonton area will soon flow with an injection of renewable natural gas (RNG) from wood waste. 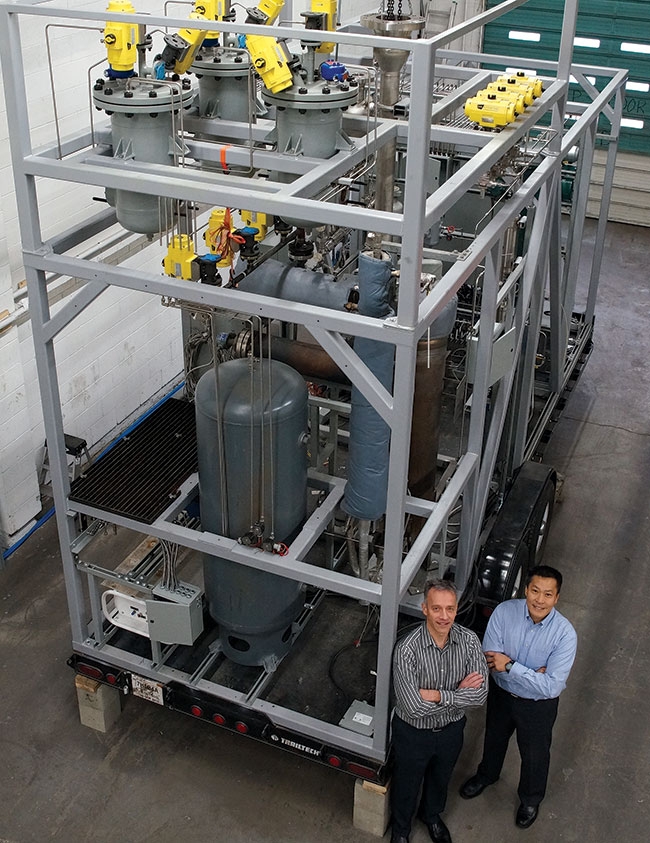 Vancouver-based G4 Insights is demonstrating its proprietary pyrocatalytic hydrogenation technology that produces RNG from lignocellulosic biomass at an ATCO Gas Distribution site in Edmonton beginning in February. The project will see a demonstration unit hooked up to ATCO’s natural gas grid – a first for the company and the technology in Canada.

“This is the next step of development. We’re enhancing the equipment to support continuous operation and we will also test a new module for injecting the gas into the grid. It’s a step towards commercialization,” says Edson Ng, project lead and principal of G4 Insights.

The demonstration unit will process 100 kilograms a day of forestry biomass and produce one gigajoule a day of RNG, or biomethane, which is the equivalent of about 30 litres of gasoline.

“Natural gas is typically 95 plus per cent methane so that is why our gas is compatible with the grid,” Ng says. As a fuel, the G4 biomethane reduces GHG carbon emissions by 80 per cent compared to fossil natural gas.

G4 Insights formed in 2008 in Burnaby, B.C., by founders Ng, Matt Babicki, Bowie Keefer, and Brian Sellars. After years of tech development, the company demonstrated its equipment in California in 2015 and in Quebec in 2016. Both projects successfully produced RNG in batches to fill natural gas-fuelled vehicles.

ATCO took interest in the project around the same time. “G4 Insights was looking to install a demonstration plant that would be able to add the gas to a distribution system,” Imad Khaled, manager of facilities engineering at ATCO, tells Canadian Biomass during an interview at their Edmonton site where the G4 project will be located.

“The amount of gas they are going to produce is like a grain drop in an ocean. Our site here flows massive volumes of gas to the city,” Khaled says. “The advantage of this site is the fact that we have all the space, and all of the equipment.”

The site includes the G4 plant that produces the gas, a trailer for the operator on site, a sea-can to store the wood, and a natural gas generator as a power source, all of which is located about 20 feet away from ATCO’s main distribution building for the Edmonton area. A small pipe runs from the plant into the distribution building and attaches to one of the natural gas lines. Once testing is complete, small amounts of the RNG will be injected into those main pipelines.

G4’s equipment is built and tested at its Vancouver office. The equipment destined for the ATCO site will be disassembled, trucked to Edmonton and then fully installed in February. RNG will be produced on site by March. A full-time G4 operator will run the plant, and ATCO’s Shawn Cummins will monitor the gas. “I’m looking forward to working with them and learning about the equipment,” Cummins says.

Technology
G4’s pyrocatalytic hydrogenation process uses moderate heat and a catalyst to convert biomass into methane and water. This is unlike a wood gasification process, which uses high heat to create syngas. Syngas must then be converted into methane.

The G4 plant is fed by wood residuals either from sawmills or harvesting operations (tree tops and branches) that have been processed through a hammer mill to create particles roughly five-millimetres long.

Wood particles are first treated to fast pyrolysis – a process that rapidly heats the particles, vapourizing them to create pyrolysis gas. “In that volatile gas state, we flow the pyrolysis gas over a catalyst in the gas conditioning section. The catalyst, combined with the pyrolysis gas, plus added hydrogen, that sets the perfect condition to form methane,” Ng says.

The process happens in a single step. Hydrogen is added internally through steam methane reforming – a process that creates hydrogen from methane. So a portion of the end product methane is recycled back into the system and converted into hydrogen. Heat for the system is generated through a burner fuelled by the waste biochar.

The only input into the system is wood chips, and the only products are methane, bio ash solids and CO2. “The bio ash is mineral rich which can be returned to the forest as a fertilizer enhancement and the emitted CO2 is carbon neutral because it is created by the combustion of biochar,” Ng says.

Challenges
From conception in 2008 G4 has jumped numerous hurdles to get to this demonstration phase. As with almost all clean energy technology, the cost of development is high.

“These projects are outside the window of typical venture capitalists. The amount up front is much larger and the payback is much longer,” Ng says. “We’ve been very fortunate to keep working with groups in the energy sector and gas industry because they understand what the long-term objectives are. It’s a great relationship.” Governments, too, are important project funders. “We’ve have great support from Natural Resources Canada, National Research Council of Canada, Alberta Innovates, and California Energy Commission,” Ng says.

“Part of our success is that we have to be very flexible with the resources we have on hand to match our available funding. We’re a private company so it’s all internally funded. We’re not venture backed,” he says.

For ATCO, the next challenge is in the long-term economics, Khaled says. “Throughout the project we are going to learn how much the gas will cost. Edson and the team ran their numbers and they believe they can come in at a competitive cost and this will be the proof,” he says.

Future
ATCO’s Gas Distribution division is hosting the demonstration unit for the next six months. Over that period it will consume 10 dry tonnes of forestry biomass and produce 180 gigajoules of RNG. G4’s ideal timeline for scale up will see a pilot plant installed and operational in late 2018 – location to be determined. “It will be in Canada and it will be in collaboration with the Canadian Gas Association and the major gas utility players in Canada,” Ng says.

By 2020 Ng expects to entertain a commercially viable plant – ideally located at a sawmill or rural gas distribution centre – that would process about 36 dry tonnes of biomass and put out 450 gigajoules per day. By 2025 they hope to supply a commercial plant that processes 750 dry tonnes per day and has an output of 10,000 gigajoules per day. “That’s enough to support about 45,000 homes,” Ng says.

The Canadian Gas Association, of which ATCO is a member, has set a target of 10 per cent RNG-blended natural gas by 2030. Currently the main source of commercial RNG in Canada is via biogas produced from anaerobic digesters at municipal wastewater treatment and agriculture facilities.

“We believe this is the future and this will keep our industry relevant,” he says.