Nov. 11, 2016 - From supply chains to government regulations to the importance of public opinion, there was something for every stakeholder in the biomass industry at the inaugural BioCleantech forum. 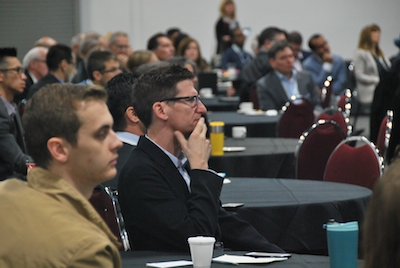 The two-day event held in Ottawa drew people from industry, government and research to learn and share ideas about the biomass industry and clean technology. Day 1 consisted of plenary presentations from a diverse group of speakers, and Day 2 was content heavy with four separate breakout rooms running simultaneously.

Matt Jones, director general for the Climate Policy Office of Environment and Climate Change Canada, kicked off the plenary day, speaking as part of the first panel on how Canada can reduce GHG emissions in concert with long-term investments in carbon-based energy systems. Jones said a First Ministers’ Meeting in December will finalize a pan-Canadian framework on clean growth and climate change. The framework will not be a declaration or press release but an actual policy framework, he assured the audience.

Malini Giridhar, vice-president of market development, public and government affairs for Enbridge, said the company has a plan to introduce biofuels into its operations for heating and transportation, but needs government policy to make it happen.

“We’ve come to the conclusion that biofuels actually make economic sense,” Giridhar told the audience. In Ontario, she cited that high-cost biofuels are less expensive than off-peak electricity costs. But the company needs a mandate, she said, to find economical ways to procure and biofuels and create demand.

Ecostrat president and CEO Jordon Solomon said he believes the demand for biomass is inevitable, and that Canada is positioned to be a world-class supplier because of predictable feed stock costs. The ability to predict the price of feed stock more makes up for the higher wood and transportation costs, he said.

“Canada can become a centre for bioenergy projects,” Solomon said, concluding that the solution is to create a secure supply chain to meet eventual demand.

Jeffrey Jacobs, president and CEO of biocrude-producer Ensyn, agreed that biomass projects will fail with an incomplete or ill-conceived supply chain, which he listed as the second of four challenges to a successful biomass project. The first challenge is technology, he said. When biomass technologies fail it is highly publicized and subject to great public scrutiny. The third challenge is uncertain or unfavourable regulations. And the fourth, Jacobs said, is the inability of projects to overcome the above and become bankable.

Ensyn is currently constructing a new biocrude facility in eastern Quebec that is expected to come online by the end of 2017.

The audience also heard from Drax Power, Fortum and Enerkem about their large-scale biofuel and bioenergy facilities, and how Canada can learn from them.