June 8, 2018 - We’ve come a long way, but there is still a ways to go. This was a prevailing sentiment from industry leaders speaking at the Canadian Bioeconomy Conference and Exhibition that took place in Prince George this week. 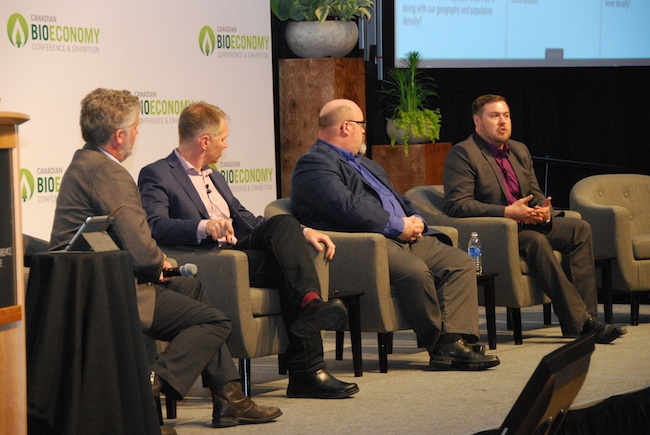 “Sometimes we forget that we are a fledgling industry,” Rob McCurdy, CEO of pellet producer Pinnacle Renewable Energy, told the crowd. “People are just starting to understand that we are comparable to wind and solar. It takes time. Don’t give up.”

McCurdy, speaking as part of an executive panel that launched the conference on Day 1, said Canadian pellets are world recognized as a quality product, but there are challenges faced by the industry, one of which is demonstrating to international buyers the sustainability of their end product. “How do you meet a demand that is growing 20 per cent a year? How do we grow sustainably to meet that demand? This is a good challenge to face,” McCurdy said.

Advanced Biofuels Canada CEO Ian Thomson, also speaking on the executive panel, outlined two other hurdles to producing fibre-based biofuels. First, that there is just one fibre basket in Canada and many players competing for it. And second, the high cost of developing technologies to process wood fibre into biofuel. Carbon pricing, Thomson said, can help overcome the cost challenge.

A benefit of pellets is the stability of price, Scott Bax, vice-president of operations at Pinnacle, said during a panel on wood pellet markets. “If you were to try and guess the price of oil and gas in five or 10 years, it would be a shot in the dark. With long-term offtake agreements, I can tell you exactly what the price of our pellets will be,” he said.

A number of speakers addressed the need for Canada to develop a national bioeconomy strategy. Addressing the crowd in a pre-recorded video, Queens University professor Warren Mabee identified the lack of a national strategy as one of five challenges still facing the industry. “Without a national strategy it’s very difficult for us to find the way forward to compete internationally,” he said.

Alex Suthridge, the technical business manager of the Bioproducts Institute at UBC and force behind the Bioinnovative Renewables Network (BiRNet), echoed Mabee’s call for a national strategy to co-ordinate efforts currently happening in silos across the country. The BiRNet is a network of 22 universities with more than 60 researchers, four not-for-prof industry partners, and 20 private sector and government partners that are collaborating on projects that demonstrate the viability of the bioeconomy.

Jeff Passmore, principal of Passmore Group and organizer behind Scaling Up Bio conference that takes place annually in Ottawa, offered a different perspective on a national strategy: “Canada doesn’t have a national bioenergy strategy, but I ask, does industry need one to get moving?” There is a market case for developing the bioeconomy without government, he told the crowd.

Biocrude producers Canfor Pulp-Licella and Steeper Energy, as well as biocoal producer BC Biocarbon all took the floor during the conference to explain their technologies and the challenges they face in taking their products to market. “The technology is available but it has a long way to go before it makes a big difference,” said Phil Marsh, president of BC Biocarbon.

Mayor Anna Tenje of Vaxjo, Sweden, gave a keynote address on the efforts the community underwent over almost 50 years that lead to their official designation as the greenest city in Europe. “Don’t wait for the national legislation; it won’t come for years,” Tenje said. “I would like to see more communities take the chance. It starts in the cities and municipalities around the world.”

Vaxjo has set a goal to be fossil fuel free in 2030. The city is using bioenergy to achieve that goal, and, since it set the target in 1996, has already reduced emissions by 58 per cent and improved economic growth by 32 per cent. “We have shown that this is possible,” Tenje said.

Clean Energy Consulting’s Tim Hoy’s presentation as part of a low-carbon economy opportunities panel centred on the idea that bioeconomy growth must come from community-level projects. “It takes a lot of the complexity out of the larger systems, and it solves community-specific problems,” he said.

A panel on Day 2 of the conference was dedicated to discussing community projects that are advancing the bioeconomy. David Dubois, manager of business development for boiler supplier Fink Machine, gave several examples of communities across Canada that have installed district heating systems, all of which are reducing green house gas emissions and allowing the community to transition away from more expensive energy sources, such as diesel.

One of those communities is Teslin Tlingit First Nation in Yukon. Teslin Tlingit Council member Blair Hogan presented an overview of the community’s project to install 10 wood chip boilers connected to three district heating systems. Wood heat not only reduces the community’s reliance on diesel, but will help them reduce the fuel load surrounding the community. “There is a huge risk of wildfires so that creates an economic incentive for us to harvest around the community,” he said.

In his keynote address to the conference on Day 2, B.C. Environment Minister George Heyman indicated his support for the growth of the biomass industry in the province, confirming there is a place for bio-solutions to climate change.

“I think, and I think you’ll agree, it’s much better to take waste and turn it into an economic advantage than pollution,” he said.