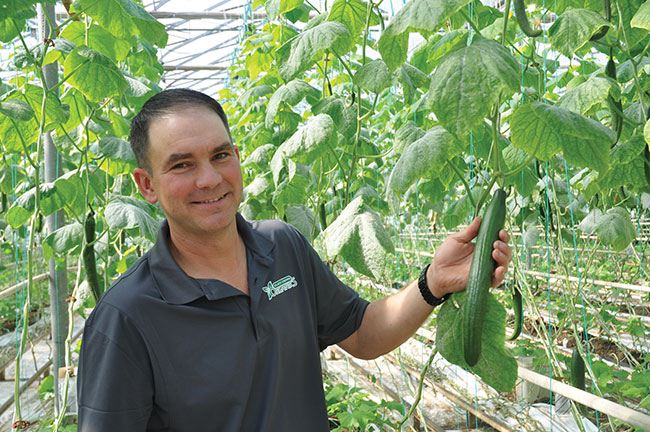 Talk about walking a fine line. Greenhouse growers care deeply about feeding their communities. But the process of extracting and distributing the fuel that allows them to heat those greenhouses – typically, natural gas or oil – can contribute to pollution in the atmosphere and waterways. With more consumers expressing concern about the effects of fossil fuel use and increasing pressure from the federal government to reduce carbon emissions, these farmers face a challenge. How can they meet current and future food production needs while managing the costs of running a business and reducing greenhouse gas emissions all at the same time?

Greenhouse growers are nothing if not inspired. Thanks to them, the greenhouse sector has the potential to become one of the superheroes in the fight against climate change. Take Marc and Krista Schurman, owners of Atlantic Grown Organics in PEI. The Schurmans were depending on four boilers to heat their four acre greenhouse, using byproducts from a local oilseed processing plant as fuel and supplementing with oil. In January, they accessed over $800,000 in federal and provincial government grants to trade in all four boilers for two, Austrian-made, 1250kw Herz Energietechnik BioFire boilers. Running on 100% solid biofuel, these boilers are designed to function efficiently and cleanly on wood chips. Supported by government funding, the Schurmans are testing the boilers’ ability to handle more than wood alone, but a mixture incorporating local oilseed byproducts from crambe and meadowform crops.

This European technology is a first-of-its-kind in North America, and it’s pushing the boundaries of what’s possible. “Our Canadian technology is similar,” Schurman says, “but it doesn’t meet the rigorous emission standards that they have in Europe.” With the Schurmans testing the BioFire’s stamina in PEI, they have taken on a dynamic role in reducing greenhouse gas emissions while heightening their efforts to feed more people year-round. In fact, the Schurmans estimate that the boilers can offset 2.1 million kg of CO2 annually, equivalent to removing nearly 500 cars off the road.

Terrence Sauvé, engineer in farmstead operation and safety at the Ontario Ministry of Agriculture, Food and Rural Affairs, suggests, “using solid biofuel, such as woody residues and byproducts from the forestry sector, or woody residues from packaging such as pallets and skids … has the potential to meet some of the heat demand of early adopters at a cost competitive advantage over certain fossil fuels. In the European Union, solid biofuels make up over 85% of the renewable heat produced.”

Detlev Elsner, managing director of Wood4Heating that installed the Schurmans’ new boilers, agrees that Europe is further ahead. “European countries, such as Germany, England, and Italy,” he says, “have provided significant subsidies to help businesses and individuals, including farmers, purchase green technology. The government support has the added benefit of encouraging companies to invest in researching ways to continuously develop and improve that technology.”

Here in Canada, most greenhouse growers still rely on fossil fuels as a consistent power source. Sauvé acknowledges that it can be more economical for many farms. “Greenhouses located near urban areas have secured long term contracts for natural gas supply at very low rates,” he says. So, while the benefit of switching to a heating system fueled by clean and renewable sources may not be immediately apparent for some greenhouses, it can be a lifeline to those in rural and remote areas. Greenhouses located far from urban centres can “pay as much as a 50% premium for #2 diesel,” he says.

No doubt, making the switch to solid biofuel is much easier when the greenhouse is located within easy reach of active forestry operations. Yet, the pressure to look at alternative sources of heating for the whole sector is mounting. “In the future, oil and gas may be less available, regardless of price, because of greenhouse gas policies aimed at reducing the use of fossil fuels,” says Professor Ralph Martin, University of Guelph. According to the National Inventory Report 1990-2018: Greenhouse Gas Sources and Sinks in Canada published in 2019 by Environment and Climate Change Canada, the current federal government has invested “$2.3 billion in clean technology including nearly $1.4 billion in financing dedicated to supporting clean technology firms and $400 million to support the development and demonstration of clean technologies.” 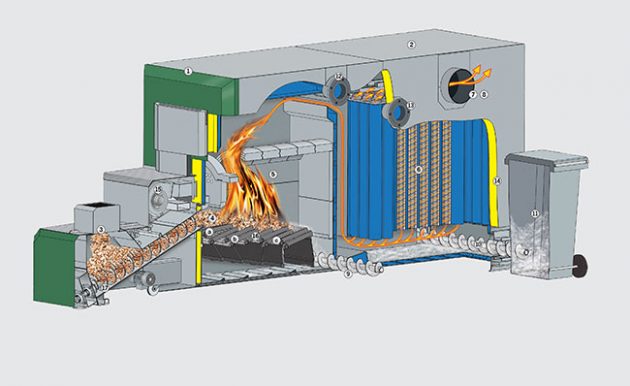 Inside the heart of a BioFire

The Schurmans are no strangers to testing renewable sources of heating for their greenhouse. They’ve been burning biomass, including straw, wood chips, and other types of crop residues, since the 1980s. The critical point for them came when their organic vegetable operation expanded to a size where burning biomass could no longer provide the necessary heat, leaving them to rely on over 100,000 litres of fuel oil annually.

It was Elsner and his business partner Alex Pratt who found the ideal solution. While the Herz BioFire boiler system was designed to burn wood chips, it also has the potential to handle non-woody solid biofuels, notably the oilseed byproducts being tested by the Schurmans. Better yet, the BioFire functions by two-stage combustion, which gives it over 93% combustion efficiency. And there’s no smell. The Schurmans report that “the boilers will cover more than 95% of the annual heat load and improve the environmental impact of the operation.”

The most impressive part might be the fact that it’s smart. “The whole system can be controlled from your phone,” Elsner explains. Herz developed a colour-coded, touch-sensitive interface by which the various parts of the system, such as combustion control, buffer management, pressure control, motor valve, and more, can be monitored.

The boiler begins the heating process by drawing biomass from the storage area, which can be built beside or above the boiler depending on space. The grate moves the biomass through the drying zone – which is ideal when there might be a higher water content in the fuel – and into the first combustion chamber where the biomass is gasified. The initial gasses produced, such as methane, are moved into a second combustion chamber where they are burned to produce heat, releasing CO2 in the process. Finally, the BioFire discharges the ash and automates its own gravity-based self-clean cycle. Each BioFire boiler self-modulates to burn continuously at optimized efficiency for every given load, Pratt and Elsner explain.

The fact that the BioFire releases carbon dioxide might seem like a contradiction. But, Canada Energy Regulator considers the amount of CO2 produced to be offset by the amount of carbon dioxide taken in by plants during their lifetime. According to a summary produced by Environment and Climate Change Canada on the Global Methane Initiative, methane is a “precursor to ground-level ozone – a key component of smog.” The report recognizes that methane “traps more than 70 times more heat over a 20-year period than the equivalent amount of carbon dioxide.”

If the BioFire can satisfy the Schurmans’ growing needs all year long and burn as cleanly as it purports, then that’s a step forward for the agricultural sector and the local economy. 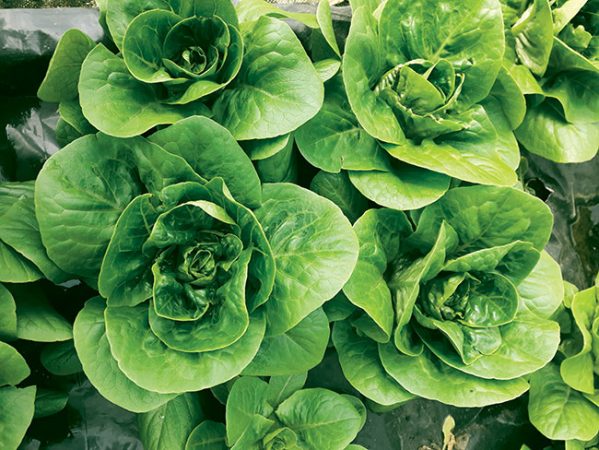 The Schurmans grow organically under the brand ‘Atlantic Grown Organics’ and harvest year-round. 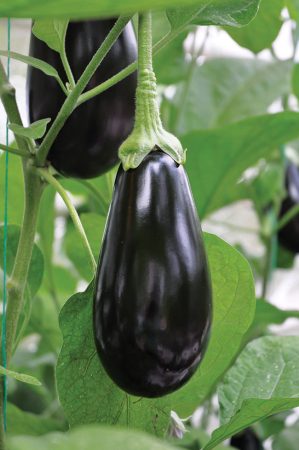 The growth of local

Wouldn’t it be great if more Canadian greenhouses could supply produce to markets across the country year round? That’s certainly one of the Schurmans’ goals. An efficient and clean heating system will allow them to do that and satisfy one of their other goals, too. Purchasing locally harvested waste residues and agricultural byproducts means that the Schurmans will put an estimated $100,000 annually back into their own community.

Using solid biofuels as a heat source has incredible potential. But, for now, there remain some perceptual, logistical, and regulatory obstacles to surmount.

Elsner doesn’t want people to picture clear-cut forests and high carbon emissions when they think about burning biomass. In fact, what makes operating the BioFire potentially carbon-neutral is the fuel used. “The wood chips should be sourced sustainably,” he says, which includes smaller trees removed during forest thinnings, leftover material from lumber mills and diseased trees – all materials that would otherwise be scrapped. In fact, disposing the biomass in other ways – burning it, leaving it to decay, or dumping it into landfills – could lead to the release of more aggressive greenhouse gasses. Instead, burning biomass cleanly in modern appliances turns an existing byproduct into an economic and environmental plus. Studies conducted by Environment and Climate Change Canada suggest that allowing space for the remaining trees and shrubs to grow “represent[s] the biggest contribution to the overall removal” of CO2. As Sauvé iterates, “using wood-based solid biomass residues from the Canadian forestry sector to generate heat and power is carbon neutral.”

To move forward, related sectors must clear up any misinformation and demonstrate how viable this technology can be. “Currently,” Sauvé explains, “the solid biofuel heating industry is still in its infancy, and there is much to be done in this sector to promote the benefits of modern wood heating appliances and the solid biofuel supply chain. Regulations for approving, operating, and supplying solid biofuel heating systems are not consistent from province to province and may pose a barrier to increasing their adoption.”

Challenges aside, increasing the use of biomass-fuelled heating to Canada is a significant step in the right direction. With industry cooperation and government support, it’s possible to envision a day when operating any greenhouse could be carbon-neutral.

This article was originally published by Greenhouse Canada magazine, www.greenhousecanada.com. Republished with permission.