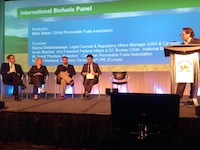 December 4, 2013, Montreal, Que. - We need stability. That was the overlying message on the first day of the Canadian Renewable Fuels Summit in Montreal, a conference that was critical of recent regulatory changes in the industry.

December 4, 2013, Montreal, Que. – We need stability. That
was the overlying message on the first day of the Canadian Renewable Fuels
Summit in Montreal, a conference that was critical of recent regulatory changes
in the industry.

“We have seen significant uncertainty in the market in the
United States [this year],” recalled Scott Thurlow, President of the Canadian
Renewable Fuels Association at his opening address of the 2013 summit. “We have
seen ridiculous ILUC Proposals get serious consideration from legislators in
Europe.”

Thurlow went on to stress that Canada is not isolated from
the threats faced in neighbouring countries. “There is a hodgepodge of
regulatory proposals flying around the country – and whether it is the federal
government or their provincial brethren – we need to ensure that our fuels are
part of the solution, and that our producers benefit from the CO2 reduction
they facilitate.”

Stability through consistent government policies is what the
industry requires, according to several of the speakers. Len Bykowski,
President of Mascoma Alberta complained that Canadian policies aren’t
aggressive enough. They need to include the bio-sector and have a long-term
plan towards an energy mix that includes biofuels.

Be consistent, he told regulators. The industry must know
where the government will be over the long-term so companies can make viable
plans. The changing messages and incentives the governments offer make it
difficult to invest in new technologies.

It’s the industry’s role to educate civil servants on the
available technology but the industry is being held back fighting the well-funded
oil industry and their media attacks.

Bykowski recommends that the Canadian industry take a
leadership role in Canada. “Carve our own pathway and get our own government
aligned to move forward here.”

The need to rebrand is another topic that was top of mind at
the sessions. Daniel Oh, President and CEO of Renewable Energy Group explained
that the media is still preoccupied with the food versus fuel issue. The
industry should clarify that it is not using food stocks and that global hunger
is a distribution issue, not a bioenergy issue. In fact, biodiesel can help
stabilize the food supply by bringing more profit to farmers.

“Biodiesel pays more for the leftover fats and oils from
meat and meal production, which encourages farmers and ranchers to produce
more,” says Oh. “We’ll always have veg oil going into biodiesel, that’s fine.”
But inedible corn oil, animal fats and recycled oils are the feedstocks of the
industry.

Robert Vierhout, Secretary General of ePURE, an association
that represents the European renewable ethanol industry, brought the subject up
again in the afternoon admitting that his group underestimated the food versus
fuel argument that just won’t go away. It has done a lot of damage to the
industry in the EU.

“We are first and foremost animal feed producers. Move away
from biofuels. We have a huge shortage of proteins and a great market so the challenge
is to move away from issues like food for fuel.”

The food versus fuel argument never gained much weight in
Canada. “There’s no better spotlight than truth,” says Scott Thurlow, President
of the CRFA, to explain the issue’s lack of legs within our borders.
Agricultural yields are going up so we’re able to make more food on the same
land. Canadians are eating less meat so there is plenty of corn leftover that
isn’t required to feed livestock.