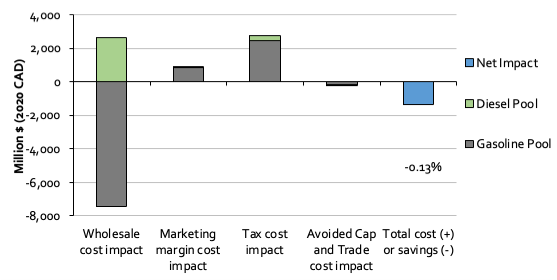 The report is commissioned annually by Advanced Biofuels Canada and independently authored by Navius Research, a leading energy and environment quantitative market analysis firm. It evaluates Canadian renewable and low carbon fuel policies and their impact on fuel consumption, greenhouse gas (GHG) emissions reduction, and consumer costs. The 2021 report quantified the impact of electrification and co-processing, and this year’s report provides new detail on how carbon tax implementation and fuel tax application is impeding biofuels’ contributions to climate action.

“The report highlights the dysfunction of federal and provincial carbon tax regimes. When very low carbon biofuels in B.C. are charged a higher carbon tax than gasoline and diesel, that sends exactly the wrong signal to fuel users. Navius estimates that by 2030, this penalty on biofuels would take $1.4 billion from Canadians every year, at absolutely no benefit to climate action. There is no technical obstacle to correcting the carbon tax on biofuels; political will is needed.”

This year’s analysis studies the extent to which current renewable fuel consumption would satisfy the requirements of the upcoming Clean Fuel Regulations and includes estimated results for 2021. Amongst improvements to this edition, volumes and GHG impact of renewable co-processed fuels are based on British Columbia government data, and the estimate of octane’s value has been refined. Tax rates used in the cost impact calculations now change by fiscal year rather than calendar year.

The full report and data tables are available here.