Highlights from the 2019 World Biogas Summit in Birmingham, UK 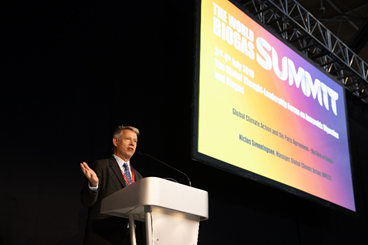 The world is far behind in the fight against climate change, and all actors, not just governments, need to play their part, especially the biogas industry, delegates to the World Biogas Summit in Birmingham, UK, heard this month.

Four years after countries pledged to limit global temperature rise to 2 C and strive for a safer 1.5 degree target, the planet is on a trajectory to 3.6 degrees warming based on a tally of the 183 Nationally Determined Contributions (NDCs) submitted to date from the signatories to the Paris Agreement.

In remarks at the opening of the Summit, Niclas Svenningsen, Manager, Global Climate Action at UN Climate Change, gave this stark overview of the climate emergency and highlighted the value of biogas technology in the mix.

“There is a tremendous potential for biogas to be a significant building block in the climate and energy plans for the UK, EU and the world,” said Mr Svenningsen. “The largest single emission source is by far energy production. Some 70 per cent of global GHG [greenhouse gas] emissions are directly caused by energy generation, and most of that is by burning fossil fuel. Wind and solar are among the most rapidly expanding new renewable energy sources, but too many countries are still subsidising fossil fuel.”

“UN Secretary-General António Guterres has been very clear in stating that the Paris Agreement and investments in fossil fuels are incompatible. Some say it is impossible to stop or even decrease our fossil fuel dependence, but business as usual is not an option, and we have seen these transformations before. Horses replaced by cars, telefax machines replaced by email… It was possible because the need was there, and the technology was there.  And this is where we are with biogas technology.”

“Biogas has all the features of the next generation technology,” said Mr. Svenningsen. “It is a win-win-win-win-win industry: Win for turning GHG into energy; Win by using that energy to replace fossil fuels; Win by turning global waste, that releases dangerous levels of methane gas every day, into a valuable resource; Win by creating jobs and contributing to the new low-carbon economy; Win by offering a stable energy source that can be built and used even at the household scale in remote areas.”

“With the right incentives, the right policies and the right support, biogas can and will offer key opportunities for many countries to help implement the Paris Agreement, while at the same time address several of their Sustainable Development Goals: clean energy, clean water and sanitation, good health, responsible consumption and production, livable cities, sustainable transport.”

“Biogas needs to be at the table when the future policies of governments are designed, when NDCs are reviewed and taken to the next level and other supporting measures, such as targets for banning food waste going to landfill, are set.”

“This work needs to be conducted hand in hand; it needs to put together business, government and civil society.”

He concluded with a plea on behalf of the youth of the world: “the generations that will inherit this planet, our sons, our daughters, their children and all generations to come. We have the power and the responsibility to build the world that they want and deserve.”

The event saw the launch of a major WBA report on the Global Potential of Biogas, which was presented to Mr Svenningsen alongside a previous, ground-breaking report on Global Food Waste Management – an Implementation Guide for Cities, published in 2018 in partnership with the C40 Cities network.

David Newman, WBA President, said: “Niclas has summed up in a few sentences what we have been saying for some time, that biogas production is a win-win for the planet, our economy and social development globally. The report we issued shows we are still only scratching the surface of potential- we have developed just two per cent of the industry’s long-term potential so far. At full scale we could reduce some 10 to 12 per cent of global greenhouse gas emissions and as Niclas says, we need the policies to enable that now, above all by reducing and eliminating fossil fuel subsidies.”