Nov. 24, 2016 - There was a time when Daron Thomas, the president of New Brunswick-based Thomas Industrial Sales Ltd., had his doubts about the viability of biomass. 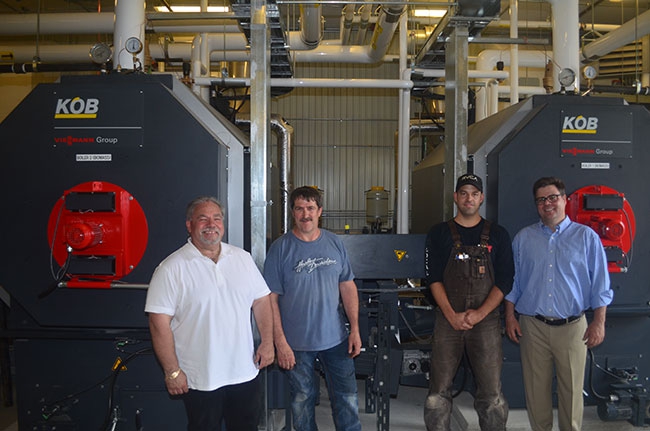 “I remember when our company first came across biomass possibilities back in the ‘80s,” he says. “The problem back then was that there was so much uncertainty around these types of projects. Consistent sourcing was an issue, and the efficiency and emissions levels for a lot of the equipment wasn’t anywhere near what it is today.”

These days, however, Thomas has few reservations about the value and long-term prospects of biomass. With more than 20 biomass heating systems installed and serviced across Atlantic Canada, Thomas Industrial has become a leader in renewable energy, and an important educator and stakeholder in Atlantic Canada. This year alone, the multidisciplinary heating company has been awarded three public biomass contracts—including heating systems for two schools and one correctional facility—in addition to three other biomass projects currently in the works.

The key, Thomas has found, is in the technological advancements and educational opportunities that have come to characterize biomass development in recent years.

“Now, we view biomass in the same way we would any other fuel source,” he says. “It’s a known commodity, and that makes working on these kinds of projects a lot easier.”

Founded by Daron’s father, Gordon Thomas, in the summer of 1968, Thomas Industrial began in a modest home office with only two employees and a handful of product lines, most of which they still represent today. With time, the company established itself as a reputable supplier of heating, water, and wastewater solutions, and set up operations in a multi-unit building in the Fredericton Industrial Park in Fredericton, N.B.

When Daron became president of Thomas Industrial in 1990, he oversaw the company’s move into their own building—and current centre of operations—in the Vanier Industrial Park in Fredericton, and continued his father’s legacy, helping to grow the company into the multiple office sales and service organization it is today.

It wasn’t until eight years ago, however, that Thomas Industrial first understood the promise and potential of modern biomass technology.

“When we decided to take another look into the biomass market, I had no idea how far the technology had come,” Thomas says. “It was an entirely different world.”

Drawing on an existing partnership in Prince Edward Island established by Viessmann’s acquisition of the European company KOB, Thomas Industrial began to service Viessmann KOB wood pellet boilers in the region. This firsthand access to operational installations was an important step for the company, both in terms of furthering its understanding of the technology and demonstrating its potential to interested customers.

(L to R) The team of Terry Thibodeau

Using this newfound knowledge and expertise, Thomas and his team have worked to build the biomass market in Atlantic Canada ever since. As relatively early adapters, Thomas acknowledges that the process has not always been easy.

“There is a lot of possibility, but there has also been some pain, just in terms of learning on the fly and working with an entirely new fuel source,” he concedes. “Still, we know we’re headed in the right direction and we’re really starting to see some of the fruits of our labour now.”

Five of Thomas Industrial’s six projects this year will use Viessmann’s Pyrot KRT 540 kW wood pellet boiler, with the sixth relying on the Pyrot KRT 300 kW, which relies on wood chips instead of pellets. Just as his father taught him, however, Thomas knows that good industrial business depends on more than just good machines. To that end, Thomas Industrial places great emphasis on educating stakeholders and supporting the growth of biomass in the region.

“Biomass technology requires local support, solid engineering, exhaustive knowledge of controls and controls integration, and quality technology,” he says. “The reality is that the technology for many of the trades—from plumbers to pipe fitters, electricians to control technicians—is new. We need to provide the support so these projects work to the customers’ expectations.”

And while biomass business is better than it has ever been in Atlantic Canada, Thomas still believes the best it yet to come.

“I have no doubt that other companies will be able to benefit on the work that we’ve done,” he says. “I believe we’ll continue to see significant growth and development in our region for years to come.”