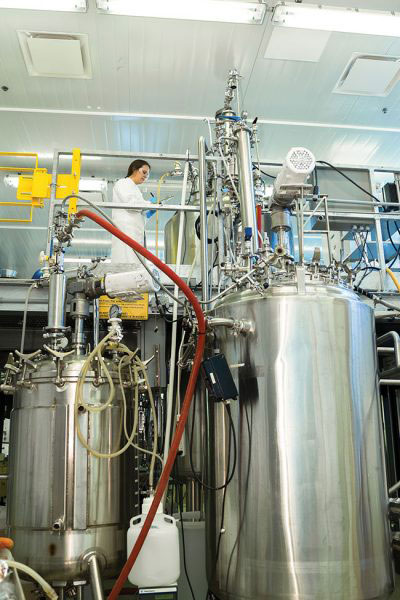 When TerraVerdae Bioworks began in 2009, the idea of producing natural biodegradable plastics still seemed like a dream that was light years away from coming to the market. Fast forward to 2020, and that dream is becoming a reality. The company now has a pilot facility capable of producing bio-based and biodegradable plastics and is scaling up production in response to demand from multiple markets.

The process
Edmonton-based TerraVerdae Bioworks got started with technology from the National Research Council of Canada (NRC), CEO William Bardosh explains. The NRC had found a natural microbe that could accumulate a polyhydroxyalkanoate (PHA) polymer used to create natural polyester plastic with similar properties to polypropylene (which is used to produce plastics from fossil fuels). Bardosh and his team decided to develop the process to produce natural plastics.

But how exactly does a microbe end up as a bio-based plastic? Fermentation.

“It’s a process that is very similar to making yogurt or beer,” Bardosh explains. “For a microbe to grow, you have to provide two things: energy and a carbon source, because everything is made out of carbon – it’s a structural part.”

The microbes multiply, are grown up to a high density and accumulate the polymer inside of them, which is later extracted. Then, through a proprietary process, the polymer is blended with other components to produce a resin, Bardosh explains. The resin can be used to make everyday plastic products.

“If you have a pure polymer, whether it’s polyethylene, polypropylene – the petroleum-based ones – or PHA, you can’t just use that pure polymer to make a bottle, plastic container, sheet or whatever you want,” he says. “All products are engineered for specific performance requirements. You’ve got to blend the basic PHA with some other components that will give it more flexibility and other applicable properties.”

The process for producing these PHA polymers is carbon-neutral and can use a range of renewable feedstocks. Agricultural feedstocks are the easiest to use, followed by forestry/wood waste and then municipal biomass waste, Bardosh shares.

While the company doesn’t have any specific feedstock suppliers yet, they are exploring a number of different sources and plan to nail down their suppliers this fall.

Focus on films
In 2016, TerraVerdae had established and scaled up the process for extracting the PHA polymer from the microbe, but found very little demand in the market, so they switched gears to focus on developing the resins.

“The issue at the time was that there really wasn’t much of a market for PHAs because it cost more to produce than petroleum-based plastics,” Bardosh explains. “Then we decided, ‘Well, if there’s no market for it, let’s start developing the resins and products ourselves.’”

TerraVerdae’s resins are used to make films, adhesives, and coatings. There is a wide range of applications for films and coatings, Bardosh says when asked why they chose to focus on these products. For example, when it comes to coatings, companies want to minimize costs so they might use a paper or cardboard container, which is then coated to become water-resistant.

But their main focus is producing agricultural films, such as mulch films. They have also developed biodegradable, bio-based plastic pouches for tree seedlings from their films – foresters will begin testing this product later this year. Currently, the company is doing tests to measure how fast these films will biodegrade in soil.

“Depending on the application, you might want them to biodegrade in a few weeks or a month, versus maybe six months. So, depending on the required biodegradability rate, we can engineer that,” Bardosh explains. “We’re also producing different kinds of pouches. They can either be sold as film pouches or they can be net-type pouches.”

Many of the products are customized based on what the customer is looking to do, because it depends on the soil type, humidity level and the actual plant or crop – whether it’s agricultural or a tree, he adds.

TerraVerdae is also interested in producing adhesives that currently cannot be recycled.

“Take an Amazon box – it’s made of cardboard, which is recyclable, but it also has tape on it, and that tape today is not recyclable. Even if the tape structure was made out of a biomaterial, the adhesives in that would not be recyclable. So, that’s the path we’re going down. We want to make it so the whole package would be compostable and biodegradable versus recyclable,” Bardosh says.

This wide range of applications also means there are a number of markets for TerraVerdae’s products: agriculture, forestry, the environmental space and packaging markets, to name a few.

Growing green
Currently, TerraVerdae produces limited quantities of their products, but plans to begin construction on a demonstration plant in January. The new demonstration plant will help the company expand its internal capability to produce the products customers request, Bardosh says.

In 2021, they will be producing close to commercial quantities, and a commercial plant is in the works for 2023 or 2024.

The overall goal in producing biodegradable bioplastics is to “establish a Canadian company that is a player in the world biomaterials market,” Bardosh says.

“It’s really coming out amongst experts in the biomaterial world that PHAs are one of the best options for displacing petroleum plastics,” he continues. “The trouble with a lot of the agricultural-based materials like starch and fibres is that they just don’t have the performance properties needed to displace advanced materials made from polyethylene, polypropylene, etc. It’s taken 100 years to develop all of these petroleum-based plastics, and we’re trying to do the same thing in 20 years.”

However, Bardosh says there is a real need for the production of PHAs. Many groups around the world are working to develop alternatives to petroleum-based plastics. But, even if every company working on PHAs was provided with sufficient funds to build full-scale commercial plants today, it wouldn’t come close to meeting the demand to displace the known petroleum-based plastics, he says.

“So, it’s a huge challenge,” he says. “This is where the world has to step up and make a concerted effort to start funding these large production facilities because, right now, they’re the first of their kind, so of course they’re going to be more expensive, but it’s the route to the future.”

Another barrier to the development of this industry is getting private investment, Bardosh says.

“So, with new technologies and big, big capital budgets, the type of investors you need really have to be supported by government,” he says. “The Canadian government is stepping up to the plate. A lot of multinationals are coming along and committing resources.”

The Alberta government has also been very supportive of TerraVerdae, Bardosh adds.

While the return on investment for a manufacturing plant like this is not as quick or obvious as for things like software programs, for example, “there are people who are looking at making impact investments right, so they’ll accept more modest returns in the short term,” Bardosh says. “The investment climate is warming up, so we’re encouraged with that.”

“The world is changing,” he adds. “There’s a recognition that we have to be good shepherds of nature.”

It’s no surprise then, that the field of biodegradable bioplastics is growing, especially as major investment funds are turning away from the petroleum industry towards green technologies.

TerraVerdae Bioworks has also grown significantly in the last two years, Bardosh says. In the next five years, he believes the company will be in a position to generate substantial revenue, with its first commercial plant up and running in Canada, and a second – possibly in Europe – in the works.

“I think consumers are much more aware of their buying choices and I think they’re more interested in supporting things that are going to be good for the environment,” Bardosh says. “Companies are picking up on that and I’m really amazed at the shift that’s gone on over the last 18-24 months.” •