February 10, 2016 - When the ownership of the $50-million biodiesel plant in Welland, Ont. changed hands in early 2015, the future of the facility was uncertain. The previous owners, Great Lakes Biodiesel, built the facility in 2013 but the plant closed in 2014 after falling into receivership and was taken over by Luxembourg-based Heridge SàRL, which was a major debt holder of the company. The new owners were left with a biodiesel plant they originally never had any intention of running. To make matters worse, the plant never operated at full capacity for prolonged periods of time and required millions of dollars in maintenance and repairs. 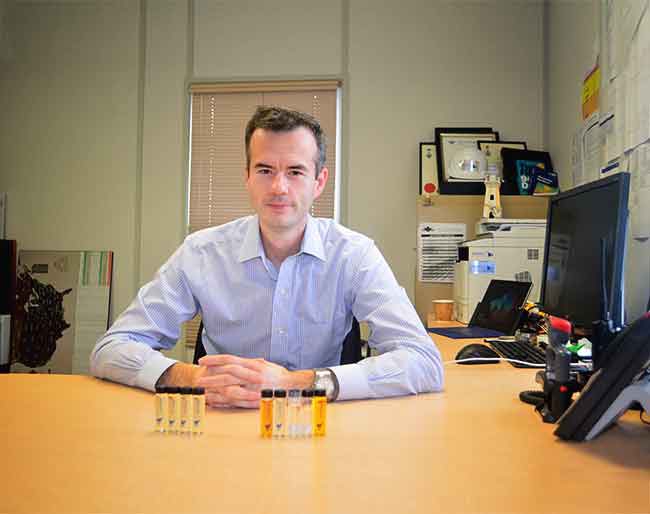 Fast-forward to August 2015, millions of dollars in equipment repairs and replacements later, and the company, reborn as Atlantic Biodiesel, was online producing its first order of biodiesel fuel. Once the plant is operating at maximum capacity, it will have an annual production capability of 170 million litres of low-cloud point biodiesel suitable for cold weather applications, and will also produce upwards of 15 million litres of high-grade, kosher-certified glycerin.

So how did this transformation happen? Enter Michael Paszti, chief operating officer for Atlantic Biodiesel. Paszti, a veteran within the industry, was hired for his previous experience in the biodiesel sector. He commissioned the first Canadian commercial-scale biodiesel plant in 2005 while working for Rothsay, at the time a division of Maple Leaf Foods Inc. The Montreal-based facility had the capacity to produce 50 million litres of biodiesel annually.

“They brought me in because of my experience in the industry to bring this facility back online,” he says. “We basically built this business from the ground up again.”

“There was some damaged equipment we replaced,” Paszti recalls. “We repaired a storage tank and a distillation column, and we replaced all the heat exchangers in the facility. There were millions of dollars of upgrades – everything from IT, the infrastructure and the lab. The fundamental process is the same but a lot of individual pieces of equipment have been swapped out either because of repairs or improvements.”

The biofuel facility’s renewal is also helping renew the economy of Welland, Ont. The manufacturing base of the city has all but left the area, leaving many in the community without employment. The operation of the biodiesel plant and its potential for growth are bright sparks for a community that’s seen more than its share of setbacks in recent years. One reason Welland was chosen for the facility’s location was the logistical advantages offered by the site, which is built on a former rail yard.

“We can spot about 70 railcars which is more than an order of magnitude more than your typical biodiesel plant,” Paszti explains. “We’re close to the U.S. market and close to the Canadian market when it finally matures. We have a great labour pool because of the manufacturing that used to go on here. You get great value and everything you need is right here.”

There are currently 30 full-time employees at Atlantic Biodiesel but that number has the potential to increase dramatically with the company’s expansion plans. The company is considering purchasing an abandoned John Deere property to establish spin-off businesses. If this plan materializes it could mean upwards of another 200 jobs brought back to the Welland area.

Kosher is king
The feedstock for Atlantic Biodiesel consists of kosher canola and soy crops. They were selected for the company’s biodiesel process because of their purity and availability.

“Those are the most common oil seeds in North America and it just so happens that canola makes the best quality biodiesel,” Paszti says. “We were able to procure Canadian canola and that’s what we have on order and what we have in our tanks. It’s a matter of availability. It doesn’t hurt that these crops are highly sustainable and the biodiesel you make from them has outstanding emissions, as well as greenhouse gas reductions versus petroleum diesel.”

The biodiesel production process at Atlantic Biodiesel generates a unique by-product, crude kosher glycerin, which accounts for about 10 per cent of the overall production of the plant.

“We are a very unique facility in that we produce kosher glycerin,” Paszti says. “Kosher glycerin is especially valuable because it is the gold standard for glycerin used in North America, and glycerin goes into just about every processed food product, cosmetics, industrial chemicals and pharmaceuticals. It’s a very useful molecule and it’s all-natural. It has a sweet taste to it so it’s a good sugar substitute but it also gives certain properties to food – it retains moisture, makes things soft… it’s a very useful chemical.”

To produce kosher glycerin you need kosher feedstock, and everything that comes into the plant needs to be kosher, otherwise the plant loses its kosher status.

“Other than certain things not being allowed – pork, for example – you just need to know about what’s going in and you have to control it against contamination. That means all our feedstock has a kosher certification and whoever produced it had control over what went into it, where the crops came from, and that there was no foreign contamination. We keep those records right until the end to prove that our glycerin is kosher.”

Examples of what would make the glycerin not kosher are if animal fat or used cooking oils were introduced to the process or if feedstock or glycerin containers were to be unsealed.

Made for the U.S.A.
For biodiesel, the market is, and will be for the near-term, the U.S. because that is where the most support and demand is for the product, Paszti says.

“Government policy has ensured an abundant market and because of the way their petroleum complex is set up, it allows for independents and users to access biodiesel more easily,” he says. “For example, you have large truck stops that are huge consumers of biodiesel in the U.S., and a lot of independent distributors that are willing to use biodiesel. In Canada, there’s a lot more reluctance to use it.”

The big petroleum companies own more of the supply chain in Canada and are more reluctant to use biodiesel, Paszti says.

Challenges for growing biodiesel in the Canadian market include a lack of infrastructure put in place by petroleum companies for blending biodiesel, as well as the mandates in Canada lagging behind their U.S. counterparts; and mandates drive renewable fuels.

“On the positive front, Ontario has a greener diesel mandate and 2015 is the first year that it’s in effect with the mandated amount ramping up over the next two years,” says Paszti. “We see some demand in Canada, but there’s still the issue of U.S. demand and U.S. subsidies… so we anticipate that all of our product will go to the U.S., for the time being.”

That said, the average biodiesel blend rate is currently two per cent, and there is a ton of room for the biodiesel market to grow.

“That’s barely your foot in the door,” Paszti says. “I’ve got years of experience running fleets of heavy duty trucks in Ontario and Quebec on blends of anywhere from two to 100 per cent biodiesel successfully. Even at a three percent blend rate, that’s more biodiesel than the entire country can produce, so there’s a huge potential to grow this market in Canada… I think long-term you’re talking about a very cost-competitive fuel that meets all your targets on greenhouse gas emissions and meets all your environmental targets.”