Aug. 1, 2017 - The boiler system residing at the British Columbia Institute of Technology (BCIT) is a little ways yet from operational, but as Alexandre Hebert explains, the system is much more than just a biomass boiler; it’s a learning tool. 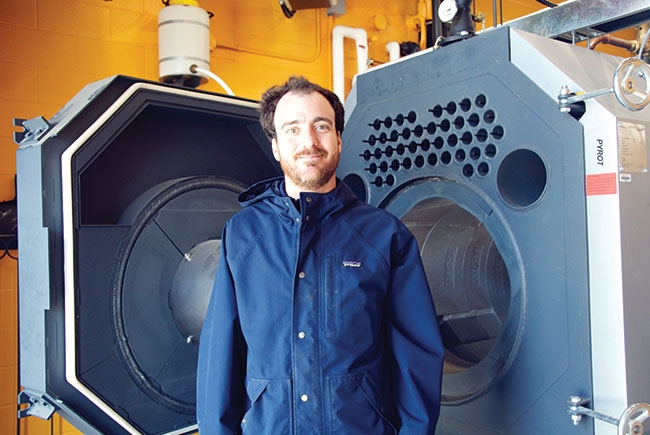 Alexandre Hebert and his team designed the boiler system at BCIT with painstaking detail to ensure it is both functional and an educational tool. The boiler system residing at the British Columbia Institute of Technology (BCIT)

“Our core business is education – everything we do is for students first, and the co-benefit is that it’s good for the planet,” says Hebert, who is BCIT’s manager of zero-emissions buildings and energy systems application.

Hebert and his team have planned the boiler system down to the last screw. Every facet of the system was designed with an educational purpose in mind.

Energy from the boiler will heat what BCIT calls its Factor Four buildings, seven buildings used by the college’s School of Construction and the Environment. Factor Four is an initiative led by the department to reduce its emissions by 75 per cent (check out their blog at www.commons.bcit.ca/factorfour). The welding shop, in particular, uses significant energy in the winter because of its ventilation system to control particulates from the welding process.

Wood residuals from the joinery and carpentry facilities will be feedstock for the boiler once it’s up and running.

“With the volume of wood waste that we were getting rid of, we knew there had to be a better solution,” says Rob Sawatzky, joinery instructor with the School of Construction and the Environment.

A student brought the idea of a biomass boiler forward and prompted the department to run with it.

“The institute is very supportive of taking new ideas and allowing people with initiative to go ahead,” Sawatzky says.

Even though the boiler is not operational yet, Hebert says it is already doing its job as an educational resource for many of the college’s programs. In fact, because it’s not in use, instructors are still able to take students through the facility to view exactly how the system works.

From an aesthetic perspective, BCIT went the extra mile. The boiler is housed in a wood and masonry building that
welcomes visitors with a glass viewing door and placards that explain the design of the system and extol the benefits of burning wood residuals for heat.

“This facility is a living laboratory that targets an annual waste reduction of 250,000 kg, and greenhouse gas emission reduction of 250 tonnes of CO2eq, which is equivalent to the carbon released by burning 100,000 litres of gasoline,” the sign reads.

Other standout architectural features of the building, constructed by Stuart Olson, include pre-fabricated wood that was produced without the use of glue or sealant to allow BCIT to burn the building at the end of its lifecycle, and wood paneling on the exterior sealed with a burning technique that creates a unique charred design.

A look inside
The facility itself has five main components: a chipper, fuel storage, the biomass firebox and boiler, an air emissions filter, and a buffer tank.

The Reinbold chipper uses a gravity-fed top-mounted hopper and produces one-inch wood chips. The chips then exit onto a conveyor that drops them into a Meridian silo, which stores about 43 cubic metres.

Another conveyor takes the wood chips from the silo to the Viessmann boiler system, which has a rated output of 300 kW. Fink Machine, the west coast supplier for Viessmann, installed the boiler. The burner has a moving grate to get the most combustion out of the wood chips.

A heat exchanger provides an indirect connection between the boiler and a series of hot water distribution pipes both above and under ground. This smart thermal grid is largely to blame for the delay in commissioning the boiler, Hebert says. The plan was to connect to an existing district energy line, but when a pipe burst the decision was made to abandon the line.

“That left the biomass project without a line to connect to. We had to go to an engineering firm and ask for a design for another way to connect. And that is now a 200-metre line from what was 10 metres. We didn’t have the budget for that. Now we’ve found a partner so it’s in the works,” Hebert says.

The air emissions filtration system was also carefully chosen to ensure the boiler meets Metro Vancouver’s emission limit of 18 milligrams per cubic metre of particulate matter. Without a filter, the boiler’s emissions are about 50 milligrams per cubic metre, which is low enough that in Austria the boilers are used without filters. But to meet the strict 18 milligram limit, Fink Machine added two stainless steel mesh filters with small pores collects particulates on the outside of filter. Compressed air systems inside of the filters blow the cake into a bin that must be removed regularly.

A 2,600-litre insulated buffer tank stores hot water from the boiler to avoid the system shutting off when it’s not required.

Even the system’s exhaust has been planned with students in mind. The stack outside of the building has three convenient port locations to enable students from the Environmental Health program as well as other environmental programs to access and take measurements with probes.

Ash from the boiler is collected and will be used as an additive for BCIT’s landscaping.

“The project took a long time so we had so much time to think,” Hebert explains.

Alexandre Hebert and his team designed the boiler system at BCIT with painstaking detail to ensure it is both functional and an educational tool.

Sorting fuel
Air quality restrictions as well as the internal nature of BCIT’s boiler project requires Hebert to fuel the boiler with only dried, untreated wood, free of glue, sourced from on campus.

Because of the glue restriction, about 20 to 30 per cent of the wood residuals from the shops is unusable. As a result, the boiler will likely be under capacity for a number of years, Hebert says, unless he’s able to supplement it with wood from off campus. “Hopefully, someday MDF and plywood are produced with glue that is benign and OK to burn in an urban environment”.

A waste sorting system at its carpentry and joinery shops is an important component of the supply chain to make sure the right fuel is headed to the chipper.

Large coloured signs indicate to students which waste should be placed into which container. Green is for biomass fuel, which is solid wood only with no metal or glue. Red is for wood waste, which includes MDF, plywood, particleboard, wood with finishing, and so on. Grey is for metal waste. And yellow is for garbage.

Bigger picture for BCIT
Once it’s up and running, likely in the fall, the boiler system will bring the School of Construction and the Environment’s emission reductions up to between 70 and 90 per cent; this will likely exceed the Factor Four initiative’s goal of 75 per cent reduction. “It was very doable with existing technology,” Hebert says.

Staying true to the educational goal, Hebert wants to build a district energy learnaing wall that explains the different components involved in building a system, as well as pros and cons of different materials.

The boiler system is also one component of BCIT’s overall pledge to reduce its overall emissions by 80 per cent by 2050. It’s a big goal and it’s taking time to realize, Hebert says.

“We did a lot of engineering studies on all five campuses and we know how to reduce our emissions by 50 per cent with off-the-shelf technology,” he says. Hebert led a proposal that was approved by the college’s board to implement a 33 per cent-reduction plan by 2021, following the same framework successfully tested with the Factor Four initiative.

“There’s no silver bullet today so you have to come up with a series of solutions and find a way to integrate them,” Hebert says. “And those solutions will be site specific. For me I have wood waste, for others it might be heat recovery from other things. We’re not going to solve anything with one big project. We take pride in being small.”