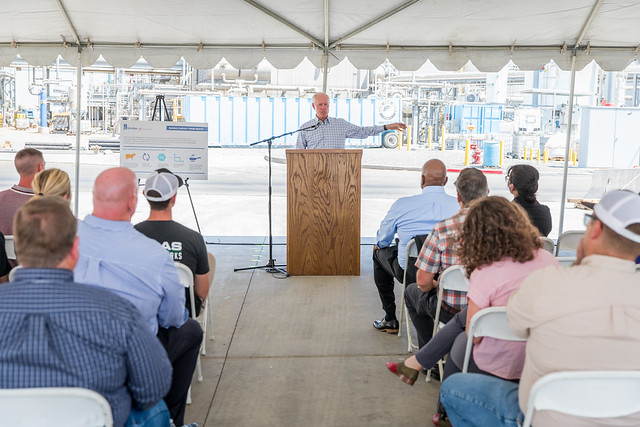 Southern California Gas Co. (SoCalGas) joined Calgren Dairy Fuels, and state and local elected officials yesterday to announce the completion of Calgren’s dairy renewable natural gas facility. The project, located in the Central Valley community of Pixley, is the first of its kind in California and is expected to be the largest dairy biogas operation in the U.S. later this year.

At the new facility, Calgren collects cow manure – a potent source of greenhouse gas emissions – from four local dairy farms and processes it in an anerobic digestor that accelerates the natural decomposition process. Methane emissions (biogas) from that process are captured and converted to make renewable vehicle fuels. Producing pipeline quality renewable natural gas (RNG) that is then injected into the SoCalGas pipeline system which allows Calgren to supply RNG to existing compressed natural gas (CNG) refueling facilities. Ultimately, this also has the potential to be delivered to customers to fuel ultra-low emissions trucks and buses, generate clean electricity, and heat homes and businesses.

Calgren plans to partner with eight additional dairy farms by the end of 2019, which will make the facility the largest dairy biogas project in the nation. At a ceremony yesterday marking the completion of the project, SoCalGas presented Calgren with a $5 million incentive check authorized by the California Public Utilities Commission (CPUC) to support the development of renewable energy projects.

“As part of our vision to be the cleanest natural gas company in North America, we have committed to replacing 20 percent of the natural gas we deliver today with renewable natural gas, primarily from organic sources, by 2030,” said Jeff Walker, vice-president of customer solutions at SoCalGas. “Renewable natural gas is a ready, reliable and realistic way to reduce GHG emissions and pollution from heavy duty transportation and buildings and will help ensure that families and businesses have an affordable option for heating and cooking as California transitions to a clean energy future.”

“Calgren is proud to be the first facility in California to operate a dairy digester pipeline cluster and to work with both the dairies and SoCalGas to mitigate emissions,” said Walt Dwelle, principal owner of Calgren Renewable Fuels. “This facility alone will eventually capture methane produced from the manure of more than 75,000 cows, preventing about 130,000 tons of greenhouse gas from entering the atmosphere each year, the equivalent of taking more than 25,000 passenger cars off the road for a year.”

RNG is a renewable fuel produced from food waste, farms, landfills, and even sewer systems. It can rapidly cut greenhouse gas emissions (GHGs) because it takes more climate pollution out of the air than it emits as an energy source. RNG is already helping eliminate emissions from trucks and buses. Over the last five years, RNG use as a transportation fuel has increased 577 per cent, helping displace over seven million tons of carbon dioxide equivalent (how greenhouse gas emissions are measured). That’s equal to the total energy used by more than 868,000 homes for one year.

SoCalGas is working to build on RNG’s success in the transportation sector by making it available to fuel the homes of the company’s 21 million customers across Southern California. Earlier this year, SoCalGas committed to replace 20 percent of its traditional natural gas supply with renewable natural gas (RNG) by 2030 – as part of a broad, inclusive and integrated plan to help to help achieve California’s ambitious climate goals.

To kickstart the plan, SoCalGas will pursue regulatory authority to implement a broad renewable natural gas procurement program with a goal of replacing five percent of its natural gas supply with RNG by 2022. SoCalGas also recently filed a request with the CPUC to allow customers to purchase renewable natural gas for their homes. SoCalGas seeks to have CPUC approval of its voluntary program by the end of the year.

Research shows that replacing about 20 percent of California’s traditional natural gas supply with RNG would lower emissions equal to retrofitting every building in the state to run on electric only energy and at a fraction of the cost. Using RNG in buildings can be two to three times less expensive than any all-electric strategy and does not require families or businesses to purchase new appliances or take on costly construction projects.

Today organic waste from farms, landfills, and wastewater treatment plants account for 80 per cent of methane emissions in California. A 2016 law requires 40 per cent of methane from the state’s landfills and dairies to be captured, with provisions to deliver that energy to customers. This will bolster the supply of RNG that is already growing rapidly as cities and towns across the country look to divert organic waste from landfills. In California, scientists at the University of California, Davis estimate that the state’s existing organic waste could produce enough RNG to meet the needs of 2.3 million homes.

“Renewable natural gas is a viable and cost-effective solution to achieving emissions reductions in this state,” said Tulare County Supervisor Pete Vander Poel. “Tulare County is the dairy capital of the world, and it’s fantastic to see industries working together to have a positive impact on our air and environment. Innovation like this will not only reduce greenhouse gases and improve air quality, it will provide job opportunities for county residents and economic growth.”

“Renewable natural gas is a smart way to address climate pollution,” said Assemblymember Devon Mathis (26th District). “It not only helps develop new businesses and economic opportunities, it also reduces emissions while allowing people to keep the option of using gas for home heating, cooking and other needs.”

The dairy digesters in the Calgren project and others like it are also partly funded under California’s Dairy Digester Research and Development Program, which aims to reduce greenhouse gas emissions from manure generated at state dairy farms. The state currently has about 30 operational dairy RNG projects and 50 more in various stages of development that will result in more than 50 million metric tons of greenhouse gas reduction (CO2e) over the next 20 years, according to the industry group Dairy Cares. Experts estimate as many as 120 projects could be funded and operating in the next five years.