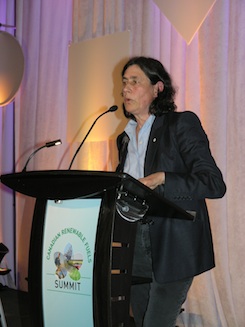 December 4, 2012, Ottawa - Over 200 delegates have gathered this week in Ottawa, Canada's policy-central, for the Ninth Annual Renewable Fuels Summit. The past year may have been rough on the sector, but overall a climate of urgency prevailed.

Hosted by the Canadian Renewable Fuels Association, the
event brings together biodiesel and ethanol producers from across Canada, as
well as researchers, suppliers, and government officials. Outgoing chair Tim
Haig opened the conference by congratulating so many sector leaders for
attending after a tough year. Despite uncertain markets, poor growing
conditions in the US, high corn prices, and the re-emergence of the
food-versus-fuel debate that many had hoped was over, Haig pointed to the
long-term opportunities laid bare by climate change meetings like the Doha
Round currently underway.

"They show the need for low-carbon transport fuel
solutions."

They indeed show the need, but the question is who's paying
attention among Canada's political class? According to keynote speaker Chantal
Hébert, very few within government circles. As a
long-time and award-winning political analyst and reporter with the Toronto
Star, Hébert is ideally
placed to provide the biofuels sector with a roadmap of the current Canadian
federal and provincial political landscape.

"We are seeing many firsts in the Canadian political scene
today," she explained to a capacity crowd looking for clues on how to improve their lobbying performance vis-à-vis a strong oil sector. "We have the NDP representing Quebec
for the first time, a Conservative PM from Western Canada for the first time in
over 50 years, women premiers in BC, Alberta and Quebec, and maybe soon in
Ontario, minority governments in Ontario and Quebec, the federal Liberal Party without a leader, and several city centres that have lost their mayors."

It's an interesting time to study Canadian politics for
sure, but not an ideal time to try to accomplish the much needed initiatives on the
environmental or energy sustainability front.

"I think it's fair to say that energy issues, including the
environment, are the constitutional debate of our time. Yet unlike that issue,
there are no larger goals, no clear national objectives, no competing visions.
The federal government is not addressing the issue in any meaningful way, so
they are leaving it to others to define the debate."

Add to that the perception that the Harper government is
seen as a simple agent of the oil sector, and governments in Ontario and Quebec
that lack the clear mandate or fiscal flexibility to pursue ambitious energy reforms, and Hébert sees tough times ahead for interest
groups trying to push renewable or alternative energy solutions.

"It will be tough to gain a voice in such a fractured
political environment. The renewable fuel sector is not alone on that front, but it's always wise to invest as much time with the
opposition parties as the government, and in the current times that's even more
the case," she suggested.

That political stalemate is all the more troubling given the message of luncheon keynote speaker Dr. Mark Jaccard of Simon Fraser University. He noted that the goal of limiting global temperature increases to 2 degrees C or less is past; today we are looking more at limiting that increase to 4 or 6 degrees. Even still, that will require a much more aggressive commitment to reduce fossil fuel use than is currently the case today.

"If groups like this (CRFA) are waiting for high oil prices from scarcity of supply to drive the agenda of renewable fuels, it won't happen. We need to reach peak emissions long before peak oil. Our problem is that with all the new supply options, there is too much fossil fuel supply, rather than not enough."

What that means from a policy and lobbying perspective is that the biofuels sector, among others, has to get a lot more aggressive in pushing its agenda, and in selling the need to the public. We are taking carbon out of the earth at a tremendous rate – it's too much way too fast. We need NOW a rising obligation for near zero emission vehicle sales and/or a rising low carbon fuel standard."

He concluded that the biomass sector, and others like it, need to punch far above their political weight to bring a sense of urgency to the energy debate. Given Hébert's comments earlier in the day, they'll likely need a lot of help along the way from provincial and opposition allies.