Oct. 31, 2016 - Several pulp companies in Canada are now producing biochemicals or biofuels and even more are in the construction phase of bioproducts projects. 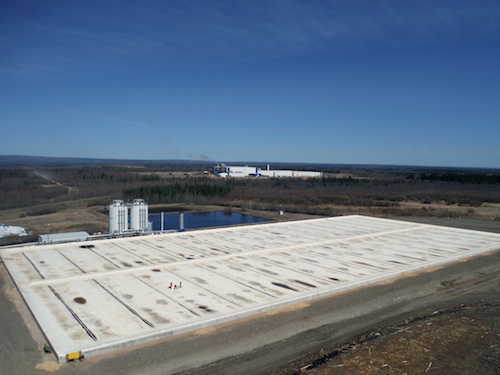 An anaerobic digester at West Fraser's Slave Lake Pulp produces a methane-rich gas that is used to produce green electricity.

Here is a round-up of announced projects at pulp mills across Canada.

It should be noted that many of these projects are supported by funding from various federal and provincial programs – most prominently, the Investments in Forest Industry Transformation (IFIT) program, Sustainable Development Technology Canada, and the Centre for Research and Innovation in the Bio-Economy (CRIBE).

Aditya Birla (AV Cell, AV Nackawic, AV Terrace Bay) – In 2014, it was announced that AV Terrace Bay was partnering with CRIBE and GreenField Specialty Alcohols to test and develop a method to recover sugars from woody biomass.

Alberta-Pacific Forest Industries – The company’s project to manufacture and sell bio-based methanol produced from stripper off-gas has had some success. It was reported in 2015 that the mill was using the bio-methanol in its lime kiln, but at that time the mill had not achieved the required specification to sell the methanol to external markets.

Canfor Pulp – Canfor Pulp has formed a joint-venture with an Australian company to integrate its catalytic hydrothermal reactor platform with Canfor’s mills. The reactor process would convert wood residues from the kraft process into biocrude oil. This could then be used to produce biofuels and biochemicals.

Cascades – At the Norampac Cabano facility, Cascades is investing in a hot water pulping process that will allow it extract hemicellulose from hardwood chips. It is expected that the hemicellulose can be sold as a wood-extracted sugar concentrate.

Domtar – After several forays into bio-products, Domtar is now evaluating the lessons learned from its many projects.

CelluForce, a joint venture between Domtar and FPInnovations, began producing cellulose nanocrystals in January 2012. CelluForce is actively testing its bio-material in applications related to the oil and gas industry, and has a commercial application in the adhesives sector. The company had stockpiled product for the market development phase, and hopes to resume production at the Windsor, Que., facility in 2017.

Domtar also invested in the LignoBoost lignin separation technology, installing a commercial-scale plant at its mill in Plymouth, N.C.

At its Dryden, Ont., mill, Domtar announced in 2015 plans to produce “modified softwood pulp fibre for high-performance composites.” The proposed pulp was intended for use in both papers and non-traditional markets, such as fibre reinforcement for cement and fiberglass.

Ensyn – Ensyn is not a pulp mill but is having success producing wood-based biofuels with its rapid pyrolysis technology at a stand-alone facility in Ontario. The company sells renewable fuels to several hospitals in New Hampshire, and has broken ground for a wood-based biodiesel plant in Quebec.

An early entrant to the bioproducts field was the Kruger Products mill in New Westminster, B.C. This mill installed a Nexterra gasification system to produce syngas from wood chips for internal consumption within the tissue facility.

Mercer (Zellstoff Celgar) – Mercer is participating in a joint venture with Resolute Forest Products to commercialize cellulose filaments for applications outside of the paper industry. The joint venture is called Performance Biofilaments.

Millar Western (Whitecourt) – A bioenergy project intended to generate green electricity for the Whitecourt pulp mill was announced in 2014. Biogas from three anaerobic digesters will be scrubbed and used to produce electricity and heat for pulp mill processes.

Port Hawkesbury Paper – Executives from the Port Hawkesbury mill said in 2014 that the company would explore the possibility of producing wood-based cellulose sugars, but no further announcements have been made.

Resolute Forest Products – In 2011, Resolute’s Thunder Bay pulp and paper mill was an early entrant to the biorefining world, hosting a demonstration-scale lignin separation plant designed by FPInnovations and NORAM Engineering. The company did not pursue commercial-scale lignin technology, but just recently announced that the mill will be the site of a pilot biorefinery with the aim of producing biochemicals from wood.

Resolute is also a joint-venture partner with Mercer in Performance Biofilaments, a company charged with finding non-paper applications for cellulose filaments.

Resolute also announced in 2016 a bio-economy project for its Saint-Félicien pulp mill in Quebec. The mill will install an enzyme-enabled carbon capture technology that is expected to capture up to 30 t of CO2 per day.

Tembec – The Tembec complex in Temiscaming is a long-time producer of lignosulfonates, and also produces resins from wood and green energy.