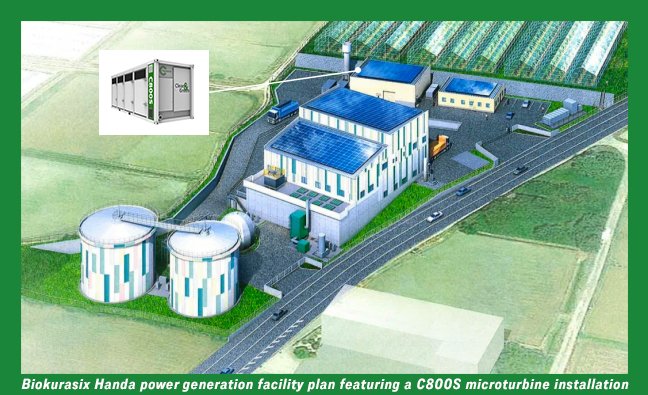 Kanamoto, Capstone’s exclusive distributor in Japan, secured the order for the biogas-fueled C800 Signature Series microturbine, which is expected to be commissioned in late 2020.

According to a recent study by Global Market Insights, the biogas market is estimated to exceed 110 billion USD globally by 2025 as countries endeavour to reduce their dependence on fossil fuel sources for power generation. Reduced dependence on fossil fuels, along with the introduction of innovative financial instruments, and government incentives is expected to drive an increased movement toward the deployment of sustainable biogas energy technologies.

“Prior to the Fukushima nuclear accident, power generation in Japan was dominated by nuclear and fossil fuels. However, since Fukushima, Japan has been striving to expand its renewable energy generation capacity to reduce its dependency on fossil fuels,” said Darren Jamison, president and CEO of Capstone Turbine Corporation.

“Japan has one of the largest biogas markets globally and the government aims to double generation by 2030. At Capstone Turbine, markets for biogas, wastewater, landfills, and breweries continue to grow and today make up 15 per cent of our total revenue for the nine months ended Dec. 31, 2019, compared to only eight per cent in the same period last year,” added Jamison.

Located in the city of Handa in Aichi Prefecture, plans for the biogas-powered facility began in early 2016 with the goal of creating a sustainable closed-loop system through resource recovery. Completion of the biogas-powered facility is scheduled for 2021 with a focus on powering the local economy with renewable energy resources and technologies.

As a project of the Biomass Industrial City Initiative, the facility is pursuing several commercialization projects centred on biogas power generation to support a sustainable community. Some of the initiatives include utilizing clean exhaust heat and gas from the Capstone microturbine to power facility processes and selling surplus power back to the grid.

The biogas-fueled 800 kW microturbine will be installed in grid connect mode, which enables the customer to operate with the utility grid in a load sharing capacity. The facility will produce a considerable amount of biogas on a consistent basis by using a digester to process the organic biomass coming from the city of Handa. The microturbine energy system will take this renewable fuel and provide prime power to the facility, ensuring complete management of the waste cycle.

Capstone microturbines are uniquely suited to cleanly and effectively run on biogas from a variety of sources, including landfills, wastewater treatment facilities, food processing facilities, breweries as well as agricultural and animal waste.