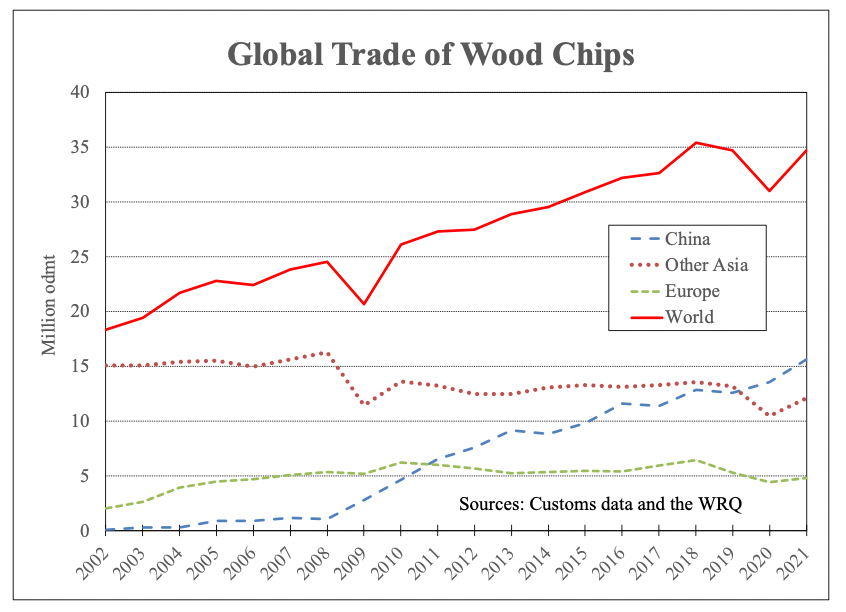 In 2021, the world’s shipments of wood chips reached almost 35 million odmt, close to the highest on record. Significant expansion of pulp capacity in China combined with a lack of domestic wood fibre has driven the global increase in traded wood chips over the past decade (see chart). About four-fifths of the trade was hardwood chips in 2021, predominantly destined for pulpmills in Asia, while the remaining volume was softwood chips. According to the Wood Resource Quarterly, importation to China reached a new record-high of 14.8 million odmt in 2021, a 12-per cent increase from the previous year. This rise was a continuation of an unprecedented upward trend that started in 2008 when China imported only one million odmt. During the first six months of 2022, China’s wood fibre demand continued to rise and was 13 per cent higher than during the same period in 2021, accounting for 56 per cent of the world’s hardwood chip imports.

Outside of China, the trade of wood chips has been relatively stable over the past ten years, with the total non-China imports ranging between 19-21 million odmt annually, except for 2020, when total shipments fell to just over 17 million odmt. This decline is attributable to the short-term supply chain disruptions due to COVID-19 rather than a change in forest production trends. In early 2022, total imports to Asia (excluding China) and Europe were practically unchanged from 2021.

When the investments in large-scale pulp mills in China began to take place almost 15 years ago, the preferred wood fibre was predominantly lower-cost and lower-quality Acacia wood chips from Vietnam, Thailand, and Indonesia. This started to change in 2013-2014 when pulpmills saw the cost and quality benefits of using higher density wood chips such as Eucalyptus Nitens and Eucalyptus Globulus from Australia and Chile. As a result, from 2012 to 2017, the high-yield fibre (HYF) share of total imports dramatically increased from 12 per cent to almost 50 per cent of the total import volume. However, in 2018, this five-year rise in market share of HYF furnish leveled off and fell during 2019-2022 to less than 30 per cent in the 1H/22. With the supply of hardwood fibre becoming tighter around the Pacific Rim, the fibre sourcing by Chinese pulpmills will likely continue to evolve, including the possibility of new regions coming into play.

Are you interested in the worldwide wood products market? The Wood Resource Quarterly (WRQ) is a 75-page report established in 1988 and has subscribers in over 30 countries. The publication tracks prices for sawlog, pulpwood, lumber, and pellets and reports on trade and wood market developments in most key regions worldwide. For more insights on the latest international forest product market trends, please go to www.WoodPrices.com.