Sept. 25, 2017 - With high operational reliability and flexible application possibilities, conveyor belts are indispensable for the transport of bulk goods in industry today. Transportation lines and material streams are important aspects of every production plant. They need to be cost-effective, efficient and above all reliable in continuous operation. A true all-rounder in transport systems for bulk materials is the VecoBelt pipe conveyor from Vecoplan. 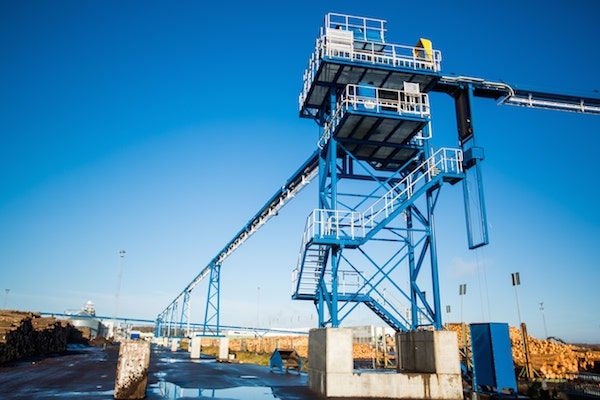 The fully enclosed system is particularly suited to the safe transportation of dust-laden materials.

The VecoBelt is ideal for conveying bulk materials over long distances either horizontally or on a slight incline. The components transport all kinds of bulk materials such as wood chips, refuse-derived fuels, meat and bone meal or wood shavings. The forward-moving VecoBelt conveyor runs inside a tube and not on rollers like with normal conveyor belts. The belt runs on cushion of air. Low friction losses and quiet operation are therefore guaranteed. The fully enclosed system is particularly suited to the safe transportation of dust-laden materials.

In recent years, Vecoplan has made some optimisations to the components and further developed the technology of the VecoBelt series (500/800 and 1000 belt width). The return belt now also runs in an enclosed housing, supported by a return air duct. This gives customers 100% certainty that no material can fall or trickle down, for example in the area of the return rollers.

Another new addition is that Vecoplan equips the VecoBelt with two scrapers at every drive station. The pre-head scraper and hard metal scraper can be adjusted from the outside, and tensioning the scraper with the ratchet is quick and easy to do. The pre-head scraper is flexible, yet stable enough to remove impurities on the belt. The hard metal scraper prevents substances such as resin from sticking to the belt.

A further technical improvement has been added to the weight tensioning stations. Additional scrapers on the drive stations have been added here too to prevent impurities from adhering to the belt. For customers, these measures mean fewer maintenance costs, fewer downtimes and less material carry-over on their conveyor line.

Vecoplan also offers customers an optional bunker attachment filter. At material transition points, where material is passed to the next conveyor and loaded into this, a radial blower has been installed to extract air containing dust.

To date, these conveyor components have built transportation lines worldwide covering a total length of more than 10 kilometres. The longest stretch is 430 m long and is driven by two 30 kW geared motors.

The VecoBelt conveys bulk materials over a distance of up to 450 meters and with a capacity of up to 1260m3/h at 2.5 m/s. The conveyor belt is quick and easy to assemble and it can span inclines up to 20 degrees. The individual support struts can be spaced up to 75 metres apart. The power consumption of the VecoBelt is only about half that of similar conveyor belts.

Vecoplan AG is a leading manufacturer of machines and systems for the resources and recycling industry for shredding, conveying and reprocessing wood, biomass, plastics, paper and other recyclable materials such as domestic and industrial waste. Vecoplan develops and manufacturers the systems and components, and sells them worldwide in the wood reprocessing and waste processing industries. It currently has around 380 employees at its locations in Germany, the USA, Great Britain and Spain. www.vecoplan.com