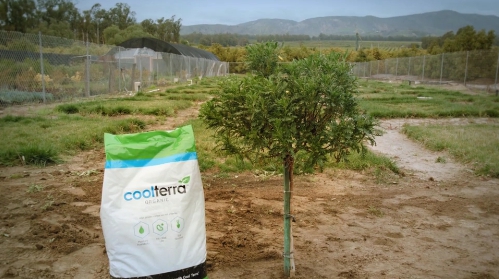 Drew Jackson, segment leader for production agriculture at Cool Planet, says Cool Terra products help to improve the soil by creating an effective habitat for the growth of beneficial microbes and enhancing root development in plants. The stable, porous properties of the material can also improve water retention and hold nutrients in the root zone for longer periods of time, while sequestering fixed carbon in the soil.

“Independent researchers conducted more than 50 field trials in 2016 with consistent, positive results,” said Jackson. “In the large majority of trials we’re seeing yield increases that could create a significant return on investment for the grower in a single season.”

Jackson says Cool Planet was so confident in the positive results of the trials that the company decided to offer a grower assurance program. If farmers enrolled in the program don’t see the financial benefits from using Cool Terra, they will be eligible for reimbursement up to the total cost of the product purchased.

“Growers may be hesitant to try out a new technology that could help them because they haven’t seen the results for themselves. We put the grower assurance program in place because we’ve seen the results of the field trials with our own eyes. We want to take any perceived risk off the table,” said Jackson. “There’s no downside for the grower here. We believe in the technology and its effectiveness that much.”

“The current commercial formulation is a dry granular product that can flow through pretty much every piece of equipment that puts down a dry material. Cool Terra needs to be placed in the root development zone, but there are multiple ways to accomplish this, depending on the cropping system and the equipment you have available,” said Jackson.

“Cool Terra products are going to help improve your soil health, and can improve your bottom line. That’s sustainability with profitability,” said Jackson.