Feb. 16, 2018 - Unlike automobiles and other light transport vehicles, airplanes face technical, safety and infrastructure challenges for being powered by electricity derived from renewable sources such as wind and power, hydrogen or fuel cell technology and will need a more energy-dense renewable fuel (i.e. bio-jet fuel). Electric aircraft are, currently, very small and are powered by batteries or photovoltaic solar panels. However, the weight and duration of power are obstacles. Electric hybrid planes will likely be utilized before full electric airplanes. Decarbonizing the aviation sector via switching to more energy-dense biofuel could, however, play an important role in reducing atmospheric CO2 concentration across the country while transitioning to a future energy system. 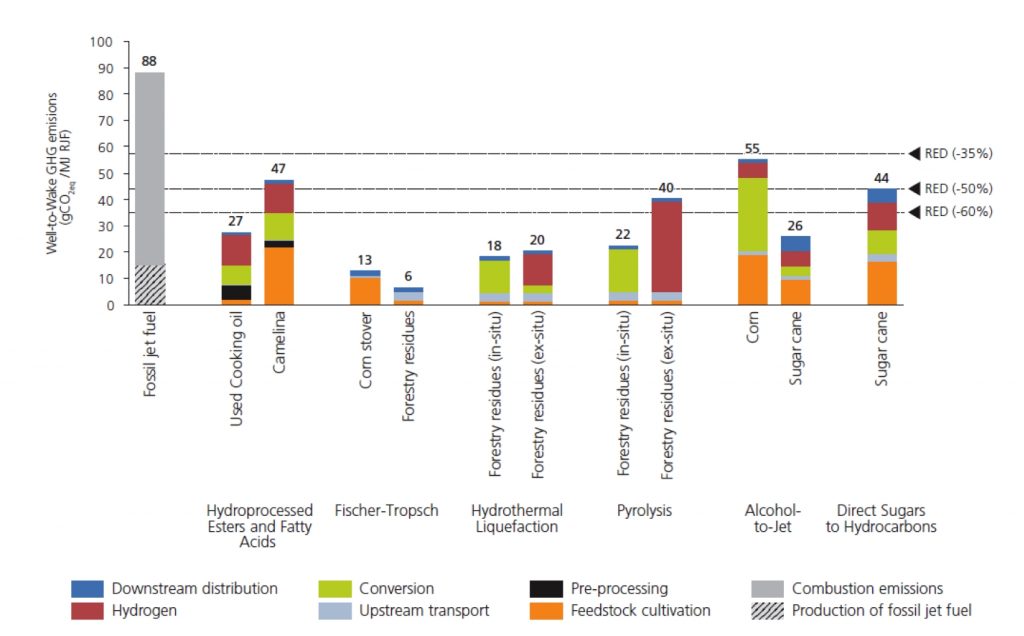 According to a report from Utrecht University, the use of bio-jet reduces net life-cycle carbon emissions as it enables reusing and recycling carbon that is already in the biosphere to create the fuel. Figure 1 compares life-GHG emissions in jet fuel for fossil fuel and bio-jet fuel produced using various conversion technology pathways. As shown, most pathways yield greenhouse gas emissions reductions exceeding 60 per cent compared to fossil jet fuel. However, some fail to reach a 50 per cent reduction threshold due to high greenhouse gas emissions associated with feedstock cultivation (e.g. fertilizer) or hydrogen consumption. As shown, on a well-to-wheel basis the bio-jet can significantly reduce GHG emissions compared to conventional jet fuel (if emissions from land use change can be avoided) and achieving such a target requires increase in bio-jet production and consumption by the aviation sector.

Benefits, barriers and challenges
Commercialization of bio-jet offers potential societal benefits by expanding energy sources, reducing GHG and other emissions that impact air quality and economic development. Many of these benefits are the result of agricultural opportunities that are not accessible to food crops. For significant reduction in GHG emissions from flights, second generation feedstock should be utilized, i.e. oils from nonfood crops or waste products – such as animal fat, used cooking oil, forestry and agricultural waste, and household trash. Having a variety of feedstocks makes it easier to produce renewable jet fuel around the world because refineries can use the feedstock most available in their region. The majority of the bio-jet could be distributed, i.e. located close to feedstock supplies, to keep costs and emissions minimum.

Policies
As aviation is international in nature, Canada should take the lead the global policies specific to bio-Jet as it is crucial to encourage larger-scale commercialization and use of the same. Technological development of advanced bio-fuels should be done through multi-stakeholder alliance including equipment manufacturers, airlines, fuel producers and airports. Carbon offsets continue to contribute to global emission reductions and it not clear whether it will accelerate the bio-jet development.

By 2050, the global aviation industry aims to combat climate change by reducing net carbon emissions by 50 per cent compared with 2005 levels. That’s a commitment to cut one-tenth the emissions projected for 2050. Improved engine efficiency and aircraft aerodynamics will provide some reductions. But transitioning to fully renewable jet fuel is key to meeting the targets suggested by the International Air Transport Association (IATA). The international nature of aviation will require global coordination of policy makers and also involvement of organization like ICAO. According to a research in Penn States’ College of Agricultural Science, in North America, several policy initiatives are pushing bio-jet fuel use in the states. One of them is EPA’s Renewable Fuel Standard that, through a rather complex system, ultimately provides credits for cellulosic biofuels, up to $2 a gallon. The second is, in certain markets like California and Oregon, a low-carbon fuel standard that provides credit for low-carbon-emitting fuels such as bio-jet fuel.

Pattabhi Raman Narayanan is an independent professional advisor. He is a Chemical Engineer by profession with a proven track record in a variety of functions including Project / Business Development, GHG Reduction and Process Engineering. Raman is an expert in innovative energy technology with decades of experience in technology development for energy intensive oil and gas, bio-fuel, fuel cell, etc. pattabhi1606@gmail.com