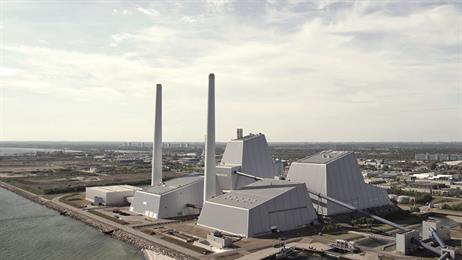 The CHP plant’s conversion happened over 18 months – part of a heat agreement between the Danish energy companies ‘Vestegnens Kraftvarmeselskab‘ (VEKS) and DONG Energy. The power station will provide green district heating to VEKS’ customers in the Greater Copenhagen area.

“Following the conversion of unit 1 at Avedøre Power Station, we can produce heat for more than 215,000 Danish households in the Greater Copenhagen area without using coal or gas,” Thomas Dalsgaard, executive vice-president for DONG Energy, said in a news release. “The conversion is a major contribution to achieving a green district heating system in the Greater Copenhagen area as well as a green electricity system, supplementing solar and wind power,” says

Avedøre Power Station expects to reduce its CO2 emissions by about 500,000 tonnes per year, which is about the annual emissions from 255,000 cars.

“Choosing the right levers to curb the ongoing CO2 emissions and thereby global warming is a complex task. However, using biomass at Avedøre Power Station’s two units is a huge step towards achieving VEKS’ goal of supplying fossil fuel-free district heating in 2025. We’ve made a difference,” Steen Christiansen, chairman of VEKS, said in the release.

Denmark’s Studstrup Power Station, near Aarhus, made a similiar transition from coal in October.

“We’re reducing our annual coal consumption at Avedøre Power Station by around 160,000 tonnes. This is very good for the climate and in line with the conversion of our power stations, which has been ongoing for several years,” Dalsgaard said.

Avedøre Power Station is expected to produce district heating to approximately 215,000 homes in Copenhagen, and electricity equal to the annual consumption of more than 600,000 households annually.