March 23, 2018 - Index Energy is on a mission to encourage diversion from landfills, clean energy use and provide district heating for the Town of Ajax, Ont., just east of Toronto. 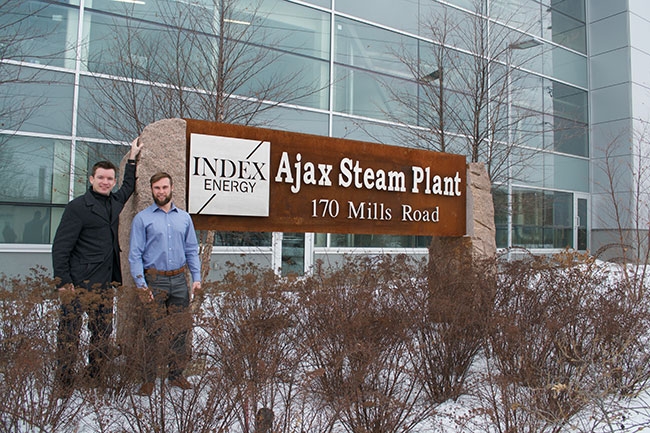 Approximately 95 per cent of Index Energy’s biomass supply comes from within 50 minutes of the facility, within the Greater Toronto Area (GTA), with the remainder coming from other parts of southern Ontario. The biomass is chipped wood primarily from the GTA’s construction and demolition sectors. Index Energy is looking to consume 158,000 tonnes of that biomass this year, but that’s only one component of the optimization plan which was developed in August 2017 with a transition to new management, including Blais, Rainbow, plant manager Mark Seely and retired Florida Power and Light Asset transition manager Joe Aletto.

“We built an optimization plan which basically looked at all the pinpointed struggles from the original construction and how we would overcome those hurdles to meet production targets,” Blais says.

The change in management also led to bringing in a team with a more specialized power generation background. There are currently 31 employees on-site, mostly composed of operating engineers and maintenance staff.

The Ontario Feed-in Tariff (FIT) contract, which was put in place in June 2015 (and will expire in May 2034), marked the beginning of an opportunity for Index, Blais says. He explains that the facility has struggled to meet production targets because the site, which was originally built as the Ajax Steam Plant in 1941, was not optimally designed in reconstruction. Interesting to note, the original plant provided steam to the Defense Industries Limited shell filling plant during the Second World War and continued providing steam to the community until the 1950s when the steam lines started being moved underground. This eventually led to Index Energy’s current redevelopment of the plant into a district energy facility in 2007. Index Energy’s FIT contract is for up to 17.8 MWh, but Blais says the realistic average power generation of the facility is 16 MWh when taking into consideration a 90 per cent facility availability rate.

“While we have achieved up to 16.8 MW, we have had hurdles with availability,” Blais said. “One such hurdle is a single wood fuel supply to the plant. In order for the fuel to get to the combustors it must go through a hydraulically driven walking floor where it’s metered on the first belt conveyor. It is then transferred to a second incline belt conveyor and then through a common screw. Should any of these pieces of equipment or their auxiliaries break down, the facility needs to be brought offline. Our solution to this is to install one 80 MMBtu natural gas burner in each retention tunnel to fire up when there is a fuel interruption.

“Another challenge we have been able to overcome is constant fouling of the HRSG [heat recovery steam generator] evaporator and superheater tubes and the formation of large clinkers by the addition of a specialized Fuel Tech Inc. product,” Blais adds. “We are now working with BMA, an engineering and consulting team from Montreal, to address issues with the volume of carryover of ash from the combustor through a uniquely designed combustor grate, which they have developed.”

“We can pull trends together to see what has been the No. 1 mechanism of failure, or what’s causing poor revenue from the plant,” Blais says.

If all goes well, the facility hopes to consume up to 158,000 tonnes of biomass in Phase Two of its overall optimization plan, which also includes installing a second fuel-feed system to get fuel into the plant’s combustors.

Phase Two expansion
“Part of Phase Two is we’ve actually got six kilometres of underground steam lines that are currently in place, so it’s a district heating loop around Ajax — it goes down to the hospitals, the high schools, other energy sectors around here and other industrial sectors such as Ajax Textile across the road,” Blais explains.

Phase Two would be providing lower-cost steam and heating, and even electricity to the community surrounding Index Energy.

“The underground infrastructure is already there, but for us we’ve got to put in new combustors, so we’re scoping that here in 2018 and looking to start implementing the project in fourth quarter 2018,” he says.

Blais and Rainbow are also approaching builders and constructors of residential buildings to build partnerships.

“We’re here to help, not pollute… We’re a local solution for renewable and clean energy,” says Rainbow, whose family runs a scrap metal and waste processing business in the U.K. where he migrated from.

“Daniel knows this Ontario wood market better than anyone,” Blais adds. “He’s very involved in the waste industry, he goes to all kinds of biomass seminars, biomass events… He’s constantly looking for disposal options for our waste, our waste ash, bottom ash, fly ash. He’s also come up with a lot of the projects that we’re looking to implement, so he’s been a key person for us.”

Index Energy is also hoping to construct a megadome on-site that will be able to store an additional 2,000 to 3,000 tonnes of wood.

That would enable the facility to store supply for a week as opposed to a couple of days, Rainbow says.

“Typically, you get your construction demolition wastewood, and they go out to a recycling centre and pay $40 to $50 a tonne to tip that raw wood,” Blais explains. “That recycling centre then processes and segregates the ferrous material, shreds it to a certain specification and sends it to us and then we pay X dollars per tonne for the wood.”

“What we’re looking at doing is actually taking that raw wood from the construction and demolition companies, processing it on-site here and reducing our wood cost by 40 to 50 per cent, further than the 20 per cent we’ve already reduced it,” he says.

The 20 per cent reduction Blais refers to involves the new wood contracts he and Rainbow negotiated. “An issue early on was the consistent supply, and it’s something Daniel has been able to address,” Blais adds.

“In the past we brought a large number of both contracted and non-contract suppliers into the plant (21 suppliers in total) which created struggles for quality control and scheduling,” Rainbow explains. “We re-addressed that with targeting key suppliers to streamline the supply coming into the plant whose quality could be controlled better. With doing that it’s kind of levelled the marketplace as well.”

“We’re working very closely with the local town for solutions for their biomass material,” Rainbow says, adding that Index Energy strategically works with its suppliers by directing new wood source leads to them and having suppliers reciprocate that relationship.

“I live by the Kaizen philosophy of continuous improvement; it’s something engraved into me by Toyota,” says Blais, who used to work in utilities for the company. He says he likes to be presented with a challenge on which he can continually improve.

“This here [Index Energy] is a big project — a lot of challenges, there’s a lot of opportunities,” Blais says. “With the district heating, after we get the power generation production at 90 per cent availability, then we go into Phase Two, and that has unlimited potential in the community. We can literally change the economics of all our neighbours and make them profitable.”

Future outlook
Blais and Rainbow say the goal is to become an environmental leader in the community and become a more active member overall to introduce the community to what Index Energy is all about.

“We’re taking 158,000 tonnes of material that would otherwise end up in a landfill and not only that, we’re segregating as well, so it’s not wood and ferrous material, and aluminum all going to a landfill,” Blais explains. “It’s now segregated, we’re purifying it, now there’s a recycling avenue for that ferrous material.

“We’re transparent and ethical and we’re here to be a big player and a big partner to the community,” he says.