March 29, 2018 - Did you know it is possible to grow trees to maturity in 15 years in Quebec? This impressive feat was achieved by Domtar with the hybrid poplar production program it launched in 1997 to increase its wood supply. A seven-fold increase in the wood yield of the natural forest has meant the paper giant is now able to add to its conservation efforts while maintaining its wood supply. 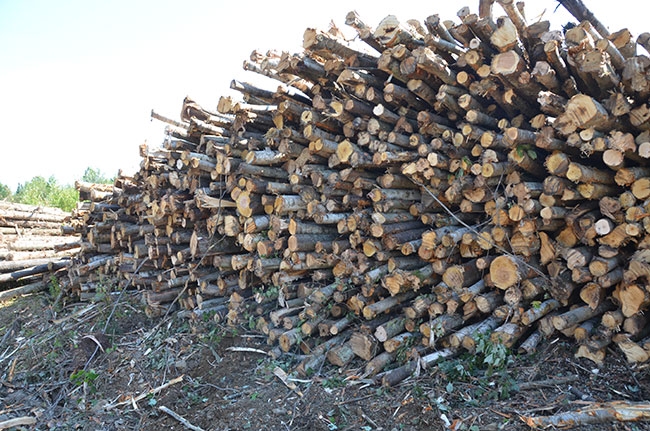 In 1997 Did you know it is possible to grow trees to maturity in 15 years in Quebec?

Looking at the canopy, you will see the leaves practically obscuring the sky. Only a few plants are able to survive under the resulting shade. The lined-up poplars are already some 10 metres high, even though they were planted a mere six years ago. “Our plan is to grow trees that are 15 metres high and 15 inches in diameter, in 15 years,” says Éric Lapointe, the forest operations co-ordinator at Domtar who has been overseeing the hybrid poplar program since 2001.

“Our hybrid poplar program has expanded with the arrival of new certification based on sustainable development,” says André Gravel, the supply manager for Domtar’s mill in Windsor, Que. “In order to protect our woodlands, we had to intensively manage other areas to maintain our supply.”

This program was also put in place to face the competition posed by paper producers from the southern hemisphere, which are able to cultivate mature eucalyptus in fewer than seven years, Gravel says.

In 1997, Domtar undertook an expansive research and development project to increase the yield of woodlands in southern Quebec by focusing on hybrid poplars. The plan was to generate wood fibre more quickly by using trees that are faster growing, but hardy enough to withstand Quebec winters. To do that, research scientists cross-bred various species of poplar to bring out the desired characteristics.

“So by mixing varieties from Quebec (Populus deltoides), Western Canada (Populus trichocarpa), Europe (Populus nigra) and Japan (Populus maximovici), we are able to maximize tree growth. When fast-growing plants, which can also resist winter conditions and disease, are produced, we take cuttings from the mother tree and plant them in the ground,” Lapointe says.

“From the outset, we chose to use about 10 different clones, so as to not produce a large area that would attract insects and disease,” Lapointe explains. “We do not plant more than four hectares of a clone in a plantation and we try to mix them with the natural forest.”

These trials gave wide-ranging results and prompted the program managers to ask themselves hard questions about how to optimize yield. “At first, we crushed and harrowed and then planted the trees, but it wasn’t effective in controlling herbaceous species,” Lapointe says. “Over time, we developed a planting method on soil mounds prepared by excavators. By turning over soil that contains no seeds, we are able to reduce competition and create micro-drainage for the plant.” It is an ideal solution both for farmland fallow and woodlands.

After finding high-performing clones and solutions for better drainage and less competition, growth was still not satisfactory, Lapointe says. “We realized soils were highly acidic and nutrient availability was very low. At times, we acted more like agronomists than foresters and to increase soil fertility, we decided to spread paper sludge, which in the past ended up in landfills,” he says.

The success of the paper fertilizer was instantaneous. The trees grew roughly two metres per year afterwards. “It was the missing piece of the puzzle. Without the sludge, we would have had to nix the hybrid poplar program, since we were not able to reach desired results,” Lapointe says. The paper sludge’s impact is particularly striking in one of Domtar’s plantations where a sludge-free control forest sits next to a fertilized one. In the control forest, the poplars struggle to get through the birch trees and herbaceous species, whereas in the sludge-fertilized forest, they dominate.

Today, Domtar plants 900 hybrid poplars per hectare in rows separated by 15- to 18-metre-wide trails to facilitate harvest and sludge spreading. Sludge is spread during planting and five years later. Studies are currently underway to determine if adding the sludge a second time is effective.

Twenty years later, after a number of failures and challenges, Domtar is reaping the benefits of its efforts since the paper giant is now able to grow trees in 15 years that are 15 inches in diameter and 15 metres high. In other words, the company aims for a yield of 15 m3/year for a total of 225 m3/hectare at harvest, an objective that sometimes takes 21 years.

Stepping up forest management is a large component of the objective to minimize the impact on biodiversity and protect certain areas, as was the case in Potton, in the Green Mountains, where Domtar helped protect 4,500 hectares (one part was donated, the other sold).

“We do not want to plant hybrid poplars everywhere,” Lapointe says. “We aim for five per cent of the 160,000 hectares of land owned by Domtar. For the moment, we have 6,000 hectares planted with poplars and have our sights set on 8,000 hectares.”

With the hybrid poplar program, Domtar is seeking to copy the Triad forest management model under which one part of the forest is protected, a second part is managed with an ecosystem-based approach and the last part is managed intensively.

According to Gravel, intensive management should be an essential part of forestry planning when it comes to Quebec’s public forests. This would help garner support from forest communities and manufacturers to focus on the three sustainable development pillars — environment, economy and society.

“Every time a new protected area is created in Quebec, we need to say which hectares we will set aside to produce more wood. It’s a great idea to create protected areas, but there is another side if we want to continue to create wealth. At least that is what we chose to do 20 years ago,” he says.

Poplar products
For the moment, Domtar uses hybrid poplar as a source of biomass to supply its two turbines, which produce 50 MW of energy. The hybrid poplar may grow fast, but it is not very dense, with a GMT/DMT ratio of 0.38 to 0.4. However, since its fibres are longer, its physical and chemical properties could be suitable for paper manufacturing.

Other users, such as Norampac, once co-owned by Domtar, also tested this species to produce paperboard. Louisiana-Pacific also conducted tests at its Maniwaki manufacturing facility to include it in its OBS panels. In the United States, hybrid poplar is used to make furniture and veneers.