Feb. 8, 2019 - The demonstration plant at the power station, near Selby in North Yorkshire, U.K., is using innovative technology, developed by Leeds-based C-Capture, to capture a tonne of CO2 a day, during the pilot. 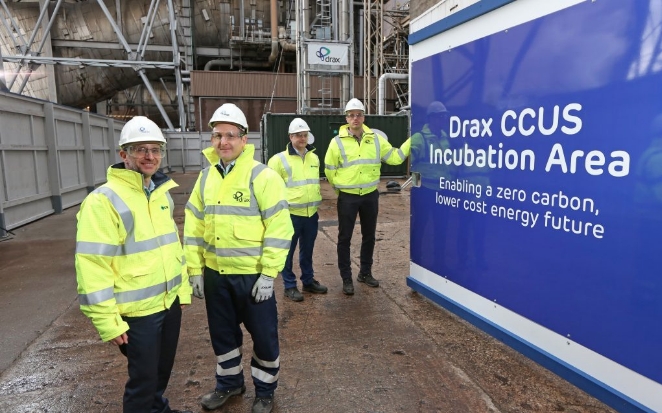 It is the first-time carbon dioxide has been captured from the combustion of a 100 per cent biomass feedstock anywhere in the world.

If the BECCS pilot can be scaled up to deliver negative emissions, Drax Power Station would be helping to remove the gases that cause global warning from the atmosphere at the same time as electricity is produced.

Engineers began commissioning the pilot plant in November with the first carbon now being captured, proving that the proprietary solvent developed by C-Capture can be used to isolate the carbon dioxide from the flue gases released when biomass is used to generate electricity.

Data being obtained about the CO2 capture process will continue to be analysed throughout the pilot to fully understand the potential of the technology and how it could be scaled up at Drax. Part of this will include identifying and developing ways to store and use the carbon dioxide being captured.

Drax has invested £400,000 in the pilot, which could be the first of several projects undertaken at the power station to deliver a rapid, lower cost demonstration of BECCS.

Will Gardiner, Drax Group CEO, said: “Proving that this innovative carbon capture technology works is an exciting development and another important milestone in our BECCS project. Climate change affects us all so this is of real significance – not just for us at Drax, but also for the UK and the rest of the world.

“The successful deployment of BECCS requires us to identify ways in which the carbon dioxide we’re now capturing can be stored or used in other processes and we’re working with the government and other businesses on that.

“We’re focused on working together to make the progress required for us to tackle climate change and enable a zero carbon, lower cost energy future.”

The Royal Society and Royal Academy of Engineering have estimated that BECCS could enable us to capture 50 million tonnes of carbon dioxide per year by 2050 – approximately half the nation’s emissions target.

Minister for Energy and Clean Growth, Claire Perry, said: “This innovative technology has the potential to make huge strides in our efforts to tackle climate change while kick-starting an entirely new cutting-edge industry in the UK. World-firsts like this will help us to realise our ambition of having a first operational plant by the mid-2020s as we continue to seize the opportunities of moving to a greener, cleaner economy – a key part of our modern Industrial Strategy.”

Chris Rayner, founder of C-Capture and Professor of Organic Chemistry at the University of Leeds, said: “This represents a major milestone on the road to achieving negative emissions through BECCS, which is going to be so important in the future. To see our technology working in a real environment like Drax is a tribute to the fantastic team of chemists and engineers who work on the project.”

Caspar Schoolderman, Director of Engineering at C-Capture added: “Working at this scale is really where the engineering gets interesting. The challenge now is to get all the information we need to design and build a capture plant 10,000 times bigger. It’s only really when we get to those sorts of scales that we can start to have an impact on the climate.”

Drax Power Station became the largest decarbonisation project in Europe by upgrading two thirds of its generating units to use biomass instead of coal. As part of the BECCS pilot, it will examine options for a similar re-purposing of existing infrastructure to deliver more carbon savings.

Work has already been undertaken to ensure the solvent C-Capture has developed is compatible with the biomass flue gas at Drax Power Station. This was completed last summer along with a lab-scale study into the feasibility of re-utilising the flue gas desulphurisation (FGD) absorbers at the power station.

FGD equipment is vital for reducing sulphur emissions from coal, but it is no longer required to control sulphur on four of the generating units at Drax that have been upgraded to use biomass, because the wood pellets used produce minimal levels of sulphur.

C-Capture is a spin-out from the School of Chemistry at the University of Leeds, established through funding from IP Group Plc.