Nov. 27, 2018 - The commissioning of an innovative Bioenergy Carbon Capture and Storage (BECCS) pilot plant at Drax Power Station has started with the first carbon dioxide expected to be captured in the coming weeks. 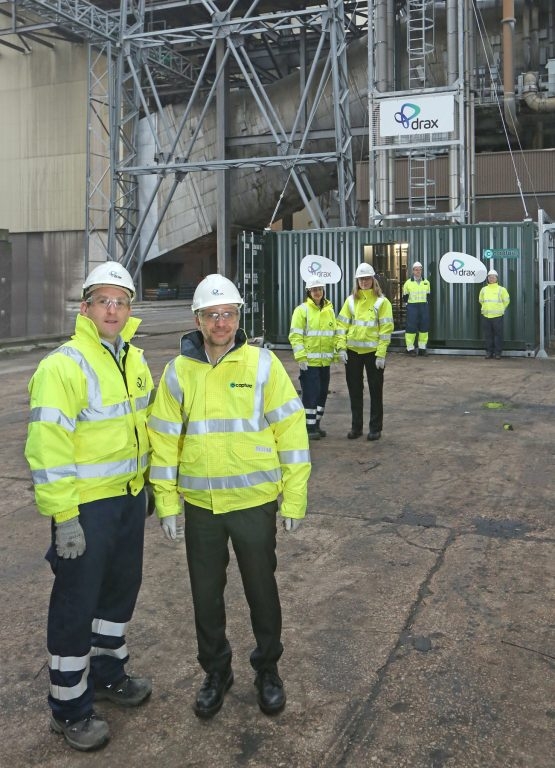 If successful, the six month pilot project will capture a tonne of CO2 a day from the gases produced when renewable power is generated using biomass at Drax – the UK’s biggest power station, near Selby in North Yorkshire.

BECCS is vital to global efforts to combat climate change because the technology will mean the gases that cause global warning can be removed from the atmosphere at the same time as electricity is produced. This means power generation would start to reduce the carbon accumulating in the atmosphere – vital for tackling climate change.

Drax is partnering with Leeds-based C-Capture and is investing £400,000 in what could be the first of several pilot projects undertaken at the power station to deliver a rapid, lower cost demonstration of BECCS.

Drax Power Station became the largest decarbonisation project in Europe by upgrading two thirds of its generating units to use biomass instead of coal and, if the BECCS pilot is successful, it will examine options for a similar re-purposing of existing infrastructure to deliver more carbon savings.

The Royal Academy and Royal Society of Engineers have estimated that BECCS could enable us to capture 50 million tonnes of carbon dioxide per year by 2050 – approximately half the nation’s emissions target.

Will Gardiner, CEO, Drax Group, said: “Our BECCS pilot project is the UK’s first step to delivering a key technology in the fight against climate change. If this project is successful, it could enable Drax to become the world’s first carbon negative power station – something many would never have dreamed possible a decade ago.

“Starting to commission the pilot plant on the tenth anniversary of the Climate Change Act demonstrates the progress made in decarbonising energy in the UK – but there is much more to do and this will be our focus at the Edinburgh CCS Summit later this week.

“At Drax we want to create a low carbon future – to do that we have to test the technologies that could allow us, as well as the UK and the world, to deliver negative emissions and start to reduce the amount of carbon dioxide in the atmosphere.”

“Backed by government funded innovation, Drax has helped put the UK on the map when it comes to carbon capture ahead of pivotal talks with global leaders in Edinburgh this week, which aim to supercharge the global deployment of this game-changing technology.”

Over the summer work was undertaken to ensure the solvent C-Capture has developed is compatible with the biomass flue gas at Drax Power Station. This was completed successfully along with a lab-scale study into the feasibility of re-utilising the flue gas desulphurisation (FGD) absorbers at the power station.

FGD equipment is vital for reducing sulphur emissions from coal, but it is no longer required to control sulphur on four of the generating units at Drax that have been upgraded to use biomass, because the wood pellets used produce minimal levels of sulphur.

The C-Capture team has now proceeded to the second phase of the pilot, with the installation of a demonstration unit. Once commissioned it will isolate the carbon dioxide produced by the biomass combustion.

Chris Rayner, founder of C-Capture and Professor of Organic Chemistry at the University of Leeds, said: “It’s clear that BECCS is one of a very limited number of viable negative emissions technologies, and is vital if we are to reach our CO2 emissions targets, not just in the UK, but around the World.”

“Being a key part of Europe’s first BECCS demonstration project is a great opportunity to showcase C-Capture’s technology, and through working with Drax, show how we can make a real impact on climate change.”

Caspar Schoolderman, Director of Engineering at C-Capture added: “This is a very important milestone on the pathway to demonstrating and scaling up our exciting new technology. Working closely with the team from Drax has been a great experience, and we look forward to getting the demonstrator fully operational, and showing just how good our technology is.”

C-Capture is a spin-out from the Department of Chemistry at the University of Leeds, established through funding from IP Group Plc.