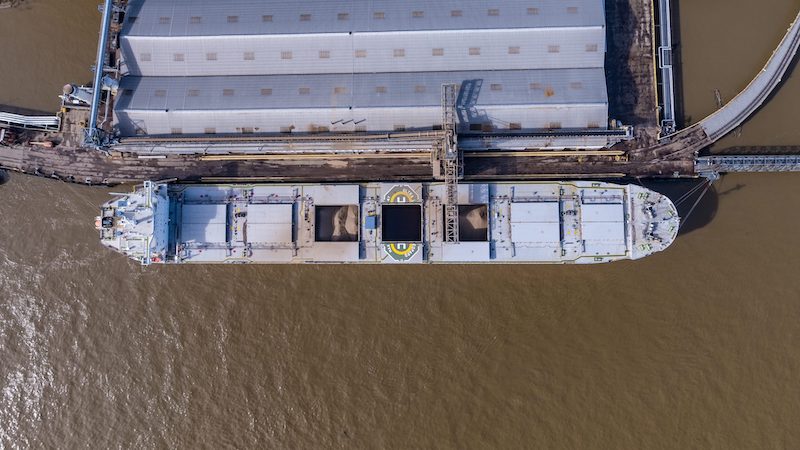 Drax has received the 100th cargo of sustainable biomass from its dedicated U.S. export facility at the port of Baton Rouge in Louisiana, marking an important milestone in five years of its operation supplying the renewable fuel to the UK’s largest power station.

The Port of Greater Baton Rouge is the final deepwater port on the Mississippi River and the closest to Drax’s three pellet plants in the U.S. South. In 2015, Drax completed work on its export facility at the port to process and ship biomass to its power station in the UK.

Ultrabulk’s MV Ultra Jaguar vessel carried 62,846 tonnes of sustainable biomass from Baton Rouge to the UK for Drax. The cargo is enough fuel to generate electricity for around 1.3 million homes.

The landmark shipment, which arrived at ABP’s Port of Immingham on March 25, will help Drax to continue to produce the electricity the UK needs during the COVID-19 crisis.

“We’re very proud of what Drax has achieved since we started using sustainable biomass instead of coal at the power station – by developing a global supply chain for sustainable biomass, our operations support thousands of jobs and have delivered economic growth across the North of England and in the U.S. South.

Maintaining our supply chain so we can continue to generate the renewable electricity the country needs is all the more important right now as we continue to play a critical role in producing power to help the fight against COVID-19. Our teams are working around the clock to keep generating the power the country needs.”

Baton Rouge Transit has shipped over five million tonnes of sustainable biomass to ports on the UK’s east and west coast in the five years since the first vessel was dispatched on April 6, 2015.

Once in the UK, the wood pellets are loaded on to bespoke biomass freight trains bound for Drax Power Station in North Yorkshire, where they are used to generate the renewable electricity that millions of UK homes and businesses rely on.

“In the past five years, the team here at Drax’s Baton Rouge facility has gone from loading its first vessel with 20,000 tonnes of sustainable wood pellets, to the 100th vessel, which loaded almost 63,000 tonnes. The team did this while achieving an industry-leading safety record, underscoring its focus and commitment to the wellbeing of our employees.

We will continue to work around the clock to maintain consistent and reliable deliveries of sustainable biomass to Drax Power Station – a critical national asset which supplies 12 per cent of the UK’s renewable power. This is especially important during the ongoing COVID-19 crisis. We have plans and processes in place to ensure our key workers can continue to carry out their vitally important roles safely during the COVID-19 pandemic.”

Drax is working closely with its suppliers in North America and Europe, as well as partners in the rail freight sector and at port facilities in the U.S. and UK to maintain a resilient supply chain amid the coronavirus pandemic.

The UK government has identified Drax as critical national infrastructure. This includes the infrastructure and logistics related to the transportation of biomass to the power station, such as ports and rail. The U.S. federal government and most state and local authorities have made similar designations relating to biomass.

Around two-thirds of the 7.5 million tonnes of sustainable biomass Drax uses each year comes from the U.S., where Drax owns and operates three pellet mills producing compressed wood pellets sourced from sustainably managed working forests in Louisiana, Arkansas and Mississippi.

The pellets are sent by rail and truck from the plants in Louisiana and Mississippi to Drax’s Baton Rouge facility before being loaded onto ships for their transatlantic journey.

Drax’s operations support around 5,700 jobs throughout its supply chains across the North of England and help to generate £600 million per year for the region’s economy.

Earlier in March, Drax received and unloaded the largest ever shipment of sustainable biomass from Baton Rouge as part of its regular supply chain deliveries.

In addition to its own wood pellet production, Drax also has agreements with a number of other suppliers in the U.S. and elsewhere around the world including in Canada, the Baltics and Portugal as well as multiple trading relationships. This gives the energy company greater flexibility in sourcing sustainable biomass.