Aug. 4, 2017 - One of the largest pellet plants in Quebec, Energex, could also be the oldest. Max Béraud, the mill manager, does not even hesitate to call it an antiquity! Created in 1983 by BioShell – in the midst of an oil crisis – the plant located in Lac-Mégantic, Que., in the Eastern Townships benefited from the know-how and oil standards in place to develop its efficiency. 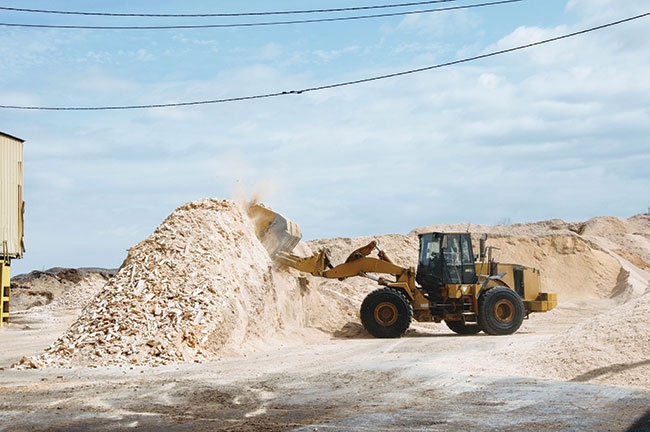 Bought by Energex in 1993, the plant has since continued to exceed standards for pellets and refine its equipment in fire prevention.

Pellets signed Energex
“The excavator operator has the most influence on the pellet making recipe,” says Max Béraud, while overseeing the wood chips mixing process outside the plant.

With the shovel, the operator must master the quasi-gastronomic art of mixing two piles of hardwood with a pile of softwood. He thus ensures the uniformity of the shavings, sawdust and other wood trims coming from the 80 sawmills across Quebec. And beware, Energex buys only virgin wood. “No recycling (wood pallet or construction wood), no bark, no aspen, no chemicals,” says Béraud, walking between the buildings intended for pelletizing and bagging.

Out of the 2,000 tons of ready-to-ship pellets piled in the warehouse in late April, most will go to Maine Energy Systems, the largest bulk customer. The other portion, bagged, is sold to Home Depot, Lowes and small traders, accounting for 80 per cent of the 40lb. bag production. In total, Energex produces 120,000 metric tons of pellets per year, as much as its twin plant located in Pennsylvania. The main buyers are in the United States. Only two per cent of production remains in Quebec or goes overseas to Italy. The entire production is intended for the residential sector.

Old factory, new equipment
When you enter the plant, you immediately notice how small the floor surface is, at only 10,000 square feet. The dryer, grinder, granulator, cooler and sieves share the space vertically on four floors.

“It’s a 32-year-old plant,” Béraud notes, listing the company’s latest investments averaging half a million dollars a year. During the last four years, Energex has remained faithful to its MEC dryer. However, they opted for more efficient Rodair cyclones made with stainless steel. The new LMM cooler was also chosen for its efficiency. Andritz not only manufactures the plant’s new granulator, but also the matrices and rollers used to compress the pellets. “They are able to make these parts according to our specifications,” Béraud says.

To ensure the pellets’ uniformity

And what instrument allows this tight follow-up? The Ness continuous vibratory analysis system, a tool that differentiates Energex from its competitors.

“By being aware of the vibration on each machine, we know exactly what is going on and we control them excessively well,” Béraud says. “We make sure they are well-adjusted, well lubricated… thus optimizing the machine condition and productivity.”

At the heart of operations there is lubrication. A normal plant spends $100,000 in fat each year for four granulators, states Béraud. By comparison at Energex, lubrication costs $6,000 and this is done, simply by hand lubricating. “Instead of using automatic lubricators, we’ve changed our machines and we need very little grease.”

Protected against fire
What other equipment differentiates Energex? The Flamex spark detection and the Fenwall anti-explosion systems. With so much dust and wood residue, a spark from a rubbing conveyor or a broken bearing is enough for the plant to go up in smoke.

This is why Energex has installed an explosion shock wave detection system. Soccer-sized balls containing water under pressure are installed wherever there is a lot of dust, like on the hoppers. If an explosion occurs, the system detects the air movement preceding the fireball, which triggers the opening of the balls. The water that comes out stops the explosion.

The added efficiency is worth the $360,000 investment. Béraud would not do without it anymore. “When it explodes, you’re happy, because nothing has moved. It only takes time to fill the balls and put the detonator back on. We make a 24-hour stop, do a big cleanup and we are ready to go again.”

Pellet roller coaster
The criteria of excellence in efficiency and safety were not always sufficient for Energex. In 2010, they stopped production due to lack of clients. At that time, they had no other choice but to develop their client directory. Fortunately, Home Depot became a new bag costumer, buying up to 60 per cent of the plant capacity in a good year. Nevertheless, the plant still does not operate at full capacity and currently produces between 70 to 75 per cent capacity.

To solve some of its fibre supply challenges, Energex has partnered with Tafisa Canada in Lac-Mégantic, a particleboard plant. The group purchases of timber allow for improved cost control.

“We do not hurt each other and we have a higher bargaining power,” Béraud says.

Given these difficulties, when asked what Energex’s next step will be, Béraud can, of course, imagine starting a new plant to get closer to the raw material and the buyers’ market. But before thinking about getting bigger, a better bulk distribution network needs to be developed, he believes. And that’s a big gap in the pellet market.

Even though wood pellet plants compete directly with the oil industry, paradoxically, the company could benefit from the fossil energy supply network.

“We must not delude ourselves, people in the oil industry tend towards renewable energies,” says Béraud, who gives the example of Sonic, who, after buying a pellet boiler licence are starting to look at the distribution channels.

“Here, we have Turmel oil, which supplies heating oil,” Béraud explains. “They know their customers and their boilers. These people have an interest in maintaining their energy distribution network. Whether they are distributing pellets or oil, it’s the same setup. They would be good candidates to help build the distribution network.”