September 24, 2015 - A group of researchers from Japan and France is being awarded the 2015 Marcus Wallenberg Prize for their development of an energy-efficient method to produce nanofibrillated cellulose. The prize-winners will receive their diploma from the hands of His Majesty the King of Sweden at a ceremony in Stockholm, Sweden, on Sept. 28, 2015.

September 24, 2015  By The Marcus Wallenberg Foundation 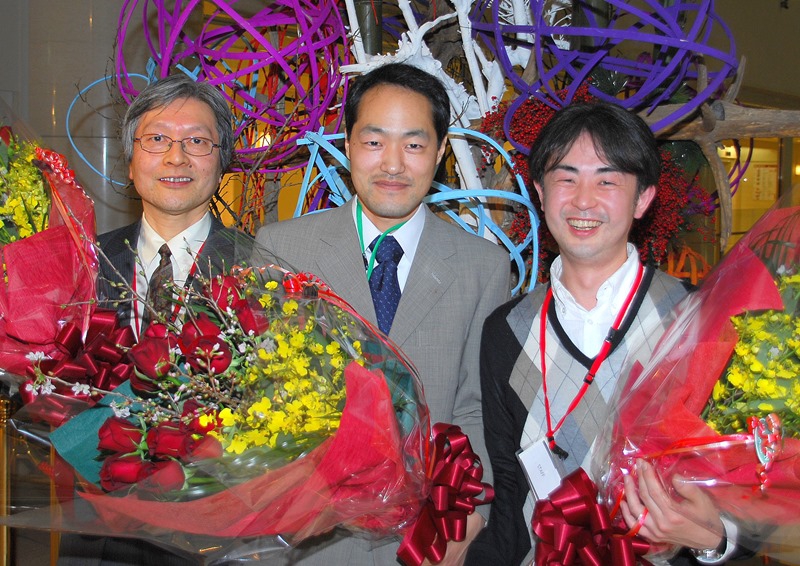 Nanofibrillated cellulose has great potentials. This nanoscale material has a surface area and shape that enables the formation of strong networks. The manufacturing process where the wood pulp is mechanically broken down to its nanoscale building blocks is however very energy-intensive, which has hampered industrial interest so far.

Groundbreaking discovery
Professor Akira Isogai, associate professor Tsuguyuki Saito from the University of Tokyo and Dr. Yoshiharu Nishiyama from the Centre de recherches sur les macromolécules végétales, Cermav in Grenoble, France, have found and developed an energy-efficient way to produce nanofibrillated cellulose. Their discovery on using a specific oxidation reaction as a tool to open up the wood material prior to mechanical disintegration has reduced the energy demand dramatically. The three scientists are awarded the 2015 Marcus Wallenberg Prize of SEK 2 million for this groundbreaking discovery.

Stabilizers in chemicals, food and cosmetics, raw materials for new types of textile fibres or composites or materials for wound dressing are just a few examples of the wide field of possible applications.

The work of the prize-winners has stimulated more intensive research on nanofibrillated cellulose and its applications around the world, says Professor Johanna Buchert from Natural Resources Institute Finland. She is also a member of the Prize Selection Committee of the Marcus Wallenberg Foundation.

Nanocrystalline cellulose is obtained by chemical removal of the amorphous parts of the fibre. The 2013 Marcus Wallenberg Prize was awarded Professor Derek Gray, McGill University, Canada, for his research within this field.

Nanofibrillated cellulose on the other hand is produced from wood pulp by mechanical treatment. In addition to the crystalline regions it also contains parts of the amorphous regions. Depending on the process the fibres can either become organized in bundles of fibrils or isolated in long and spaghetti-like fibrils.

Interest from the industry
Nanofibrillated cellulose has become more interesting for various applications since the Marcus Wallenberg Prize-winners Akira Isogai, Tsuguyuki Saito and Yoshiharu Nishiyama were able to exploit the specific oxidation reaction as a tool to facilitate the mechanical disintegration of the wood pulp. By their method the energy need can be reduced from 30 000 kWh/ton to 100-500 kWh/ton. The cellulose produced this way is even more homogeneous.

It is a significant discovery that paves the way for nanocellulose being one key product of the future forest industry. The energy consumption is a very important parameter, and the traditional production of nanofibrillated cellulose has been too energy-intensive to attract industrial interest, says Johanna Buchert.

Numerous applications
The combination of crystals and the flexibility of the fibrillar structure gives nanofibrillated cellulose the potential of forming barriers, retaining large amounts of water, being able to modify rheological properties of liquids or display highly porous light structures as dry.

Its strength and lightness is valuable for making reinforced composites, improved paper grades and textile fibres, while the water retention ability and viscosity is useful for producing stabilizers in food, cosmetics, paints and adhesives or even in pharmaceutical products.

We must find new products from our forest raw material to renew the forest industry. This years’ prize has opened up a new pathway and created a new route of opportunities.

Akira Isogai
Professor Akira Isogai graduated from The University of Tokyo in 1980, worked as a postdoctoral fellow at the Institute of Paper Chemistry in Appleton, WI, USA, and as a research associate and visiting scientist at the US Forest Products Laboratory, Madison, USA. In 1994 he was appointed as an Associate Professor at The University of Tokyo and in 2003 he was promoted to full professor.

Yoshiharu Nishiyama
Dr. Yoshiharu Nishiyama graduated in 1997 in Agricultural from the University of Tokyo, where he obtained his PhD in 2000 and started working as an Assistant Professor. Since 2004 he has been a senior scientist at the Centre de recherches sur les macromolécules végétales, Cermav, Grenoble, France.

Tsuguyuki Saito
Dr. Tsuguyuki Saito graduated in 2003 from the University of Tokyo where he obtained his PhD three years later. During his PhD studies he was awarded a Marie Curie Fellowship, which supported his work with Dr. Yoshiharu Nishiyama at Cermav, France. During 2012 and 2013 he worked as visiting scientist with Professor Lars A Berglund at the Royal Institute of Technology, Sweden. He is now an Associate Professor at the University of Tokyo.

Prize ceremony and symposium
The prize will be awarded by His Majesty the King of Sweden at a ceremony in Stockholm, Sweden, on Sept. 28, 2015. A symposium on the award-winning theme and its importance to the forest industry and society takes place on Sept. 29, 2015.