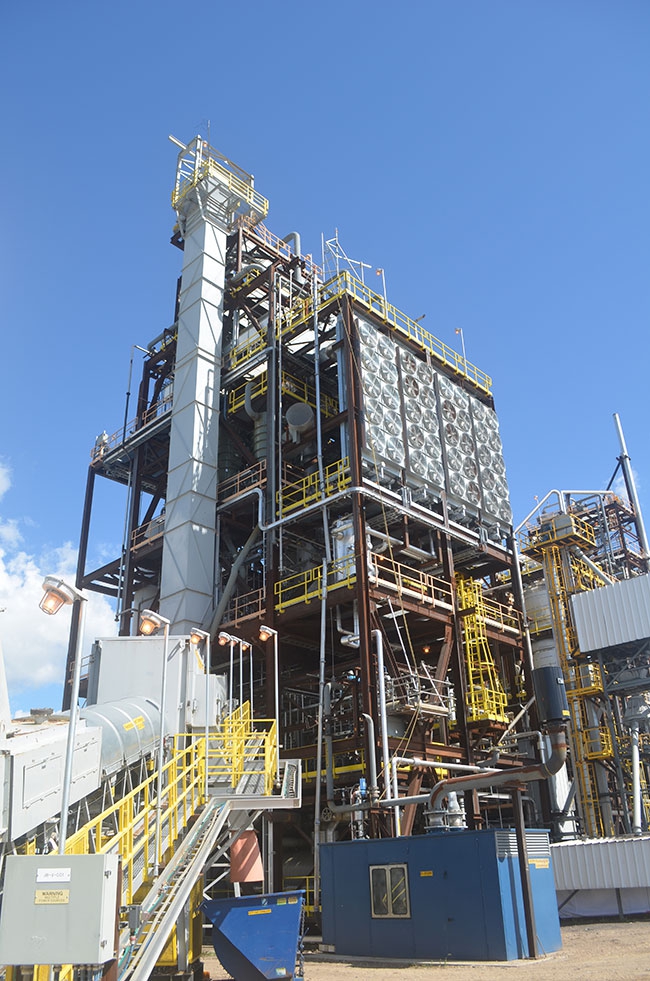 The full production capacity of the plant is estimated at 40 million litres of bioethanol. Photo: Annex Business Media.

Canadian Biomass was on hand to watch one of the first tanker trucks fill up on methanol to fill a commercial order this past August at the Edmonton Waste Management Centre where the Enerkem facility is being constructed over three phases. Although the plant is now in full operation for the production of biomethanol, a third phase of construction is underway that will allow Enerkem to also produce bioethanol. That final phase is expected to be complete by mid-2017 with production of bioethanol underway in the second half of 2017.

As for the biomethanol, Enerkem reached an off-take agreement with the Methanex Corporation, the largest methanol producer in the world, which will purchase as much biogas as the facility can produce. The processing capacity of the facility is 300 dry metric tons per day of feedstock input. The full production capacity of the plant is estimated at 40 million litres of ethanol.

This past August, Enerkem’s Edmonton-based biorefinery became the first plant in the world to be certified by the International Sustainability and Carbon Certification (ISCC) system for the conversion of municipal solid waste into biomethanol.

“I think it’s going to become increasingly important for companies to validate their emission and environmental benefits through these types of certification agencies,” says David Lynch, general manager of research and development for Enerkem. “We’re quite proud to be the first waste-to-biofuels company to have that.”

Lynch sees huge opportunities for his company’s technology to expand throughout Alberta in areas like Calgary and other heavily populated regions that could accommodate one or more facilities like the one in Edmonton.

“There’s waste available to build more facilities and this has a huge impact on greenhouse gas reductions,” he says. “We’re also complementing the local fuel supply with a very low carbon fuel that has a very beneficial environmental result.”

The Edmonton facility is considered the minimum size for a full scale Enerkem waste-to-biofuels facility.

“This is a standard size scale built around the scale of the gasifier,” Lynch explains. “That gasifier is designed to handle about 100,000 dry metric tons of waste each year, which translates to about 300 dry metric tons each day, and then when you add the moisture content it comes to about 350 tons per day. That’s the core, standard scale module for Enerkem. So for facilities and opportunities that needed more, we would place multiple gasifiers.”

In the case of Calgary, for example, Lynch says the city’s waste supply is large enough to fuel between four and six of the Enerkem gasifier plants, but that doesn’t necessarily mean that six plants should be built there.

“You don’t want to complete with recycling,” Lynch says. “The thing we focus on is making sure that we’re complementing current recycling and composting efforts.”

This past October, Enerkem submitted a proposal for construction of a US$200 million waste-to-biofuels refinery in Rosemount, Minn. in partnership with Minnesota-based SKB Environmental. The biorefinery would be built and operated next to an SKB landfill.

The company is also in talks with other U.S. companies, as well as companies in the Netherlands, U.K., Germany and China.

“There’s a real need on the waste side, just to dispose of the waste,” Lynch says. “Then you’ve got all the opportunities on the product side. Not only can you produce methanol and ethanol, but the methanol and ethanol are key intermediates that go into a lot of other products and chemicals. For example, you could get into things like acetic acid, acrylic acid, ethylene propylene – all sorts of things where you may not realize where they are used right away, but they are used in basically everything.”

To produce the additional chemicals, Enerkem only needs to bolt on an additional unit to the methanol production process.

“We’ve got a core process that produces methanol from waste and we’ll then bolt on the ethanol portion to give us the capability to go to ethanol,” Lynch says. “That could just as easily be a methanol-to-ethylene portion, or methanol to propylene, or methanol to acrylic acid, so you’ve got the full optionality to really go to whatever you want. And methanol itself is a ubiquitously used chemical that’s used everywhere around the world… but just by itself it’s a great fuel and it’s a great feedstock.”

How it all started

The project has come a long ways since it started out as a research for a pilot project at the University of Sherbrooke in 1999. In 2003, the pilot project began and the results were promising.

“We successfully demonstrated about 20 different feedstocks including different types of biomass and ways of recycling plastics and plastic blends with biomass,” Lynch explains. “The economics looked good. We demonstrated that we could clean the syngas on a pilot scale and run that through a methanol reactor.”

After years of careful planning and obtaining the necessary financing, the waste-to-biofuels industrial demonstration plant was commissioned in 2009 in Westbury, Que. with the facility processing 48 tons a day of feedstock input. Enerkem was able to complete its design process development around the demo plant, which helped the company plan out its full-scale commercial plant.

The biggest challenge Lynch sees moving forward will be related to deployment.

“We’ve got our first plant here up and running, but how do you do this three or four times a year around the world,” he says. “I think there’s going to be a big growth challenge. We’re bracing for that now by planning ahead with our next facilities coming.”

To enable its international growth, the company has developed its plants based on a standardized modular approach with pre-fabricated modules. This allows to deploy more than one project at a time.

Feedstock variation around the world could also present some challenges.

“Not all garbage is created the same,” Lynch says. “It’s a matter of anticipating the problems and testing, so we’re evaluating the different feedstocks.”

If the company continues to grow as planned, facilities like the one in Edmonton could have a significant impact in reducing greenhouse gases everywhere.