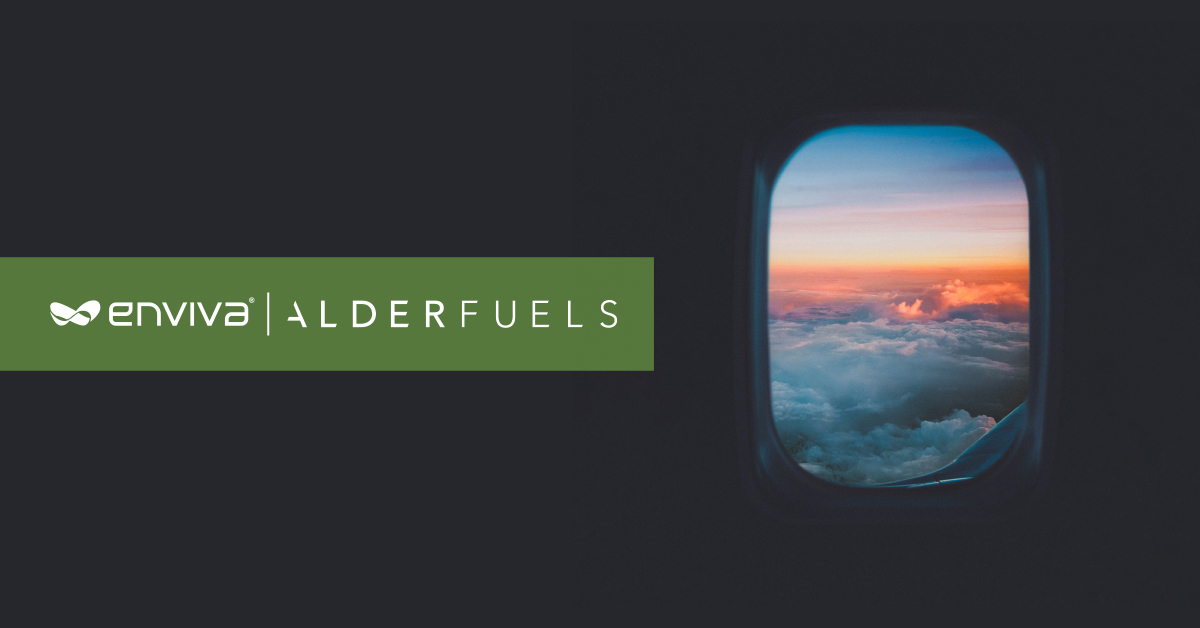 Enviva Inc., the world’s leading producer of sustainably sourced woody biomass, and Alder Fuels, a clean tech developer and greencrude producer, have signed a contract for the long-term, large-scale supply of woody biomass from Enviva, which sources low-value fibre, such as forest byproducts like tree tops, limbs, and commercial thinnings, to further commercialize the supply of sustainable aviation fuel (SAF).

Today’s agreement would make Enviva an exclusive supplier of up to 750,000 metric tons per year of sustainably sourced woody biomass to Alder’s first Alder Greencrude (AGC) production facility, soon to be under construction in the southeastern United States. The supply of sustainably sourced woody biomass feedstock by Enviva is expected to commence in 2024, which will meet rigorous sustainability criteria, subject to independent, third-party audits and certifications.

Bryan Sherbacow, Alder Fuels’ president and CEO, commented, “Decarbonization of our entire economy is driving massive demand for the next generation of sustainably sourced renewable fuels. The size of the market for our product is equal to the petroleum market it replaces. With AGC technology, the challenge of meeting this demand is no longer industry willpower or commercial interest; it is having ready access to diverse, highly accredited, and sustainably produced sources of biomass. Today’s announcement brings us one step closer towards achieving that aim, while benefiting the communities in which we operate.” 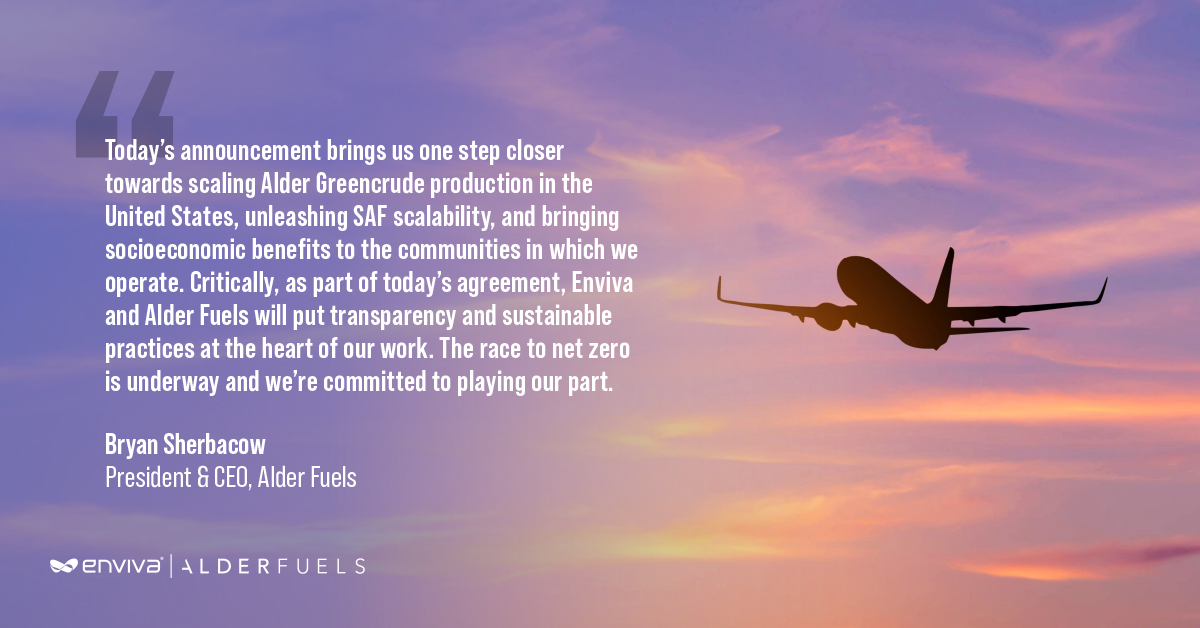 The announcement represents a major milestone in the rapid acceleration and scaling up of low-carbon transportation fuels with the potential to fundamentally change the future of flying and other modes of transport over time. In March 2021, major U.S. airlines committed to achieving net-zero carbon emissions by 2050, which was reinforced by an announcement in October 2021 by the world’s airlines and aviation community. Recognizing the scaling up of SAF is critical to meeting such aggressive climate goals, the White House launched the “SAF Grand Challenge,” with goals to have 3 billion gallons of SAF produced in the U.S. by 2030 and augmenting to 35 billion gallons by 2050. The recent passage of the Inflation Reduction Act (IRA) into law amplifies the U.S. commitment to SAF by providing tax credits for every gallon of SAF produced based on lifecycle greenhouse gas emission reduction percentages. Further, the IRA extends and modifies the tax credit for the production of renewable energy from biomass and other technologies.

Europe is pursuing similar policy initiatives such as ReFuelEU, with the European Parliament voting in support of draft rules to require SAF to account for at least 85 per cent of European Union (EU) aviation fuel by 2050. Similarly, the United Kingdom announced the introduction of a SAF mandate, requiring at least 10 per cent of jet fuel to be produced sustainably by 2030.

Major U.S. airlines have been seeking opportunities to collaborate with other industries to deliver commercial solutions to sustainable aviation at scale, with such initiatives accelerating over the past two years as they individually, and collectively, committed to becoming carbon neutral. In fact, United Airlines has already committed to purchase 1.5 billion gallons of SAF from Alder Fuels when produced to the airline’s requirements. United Airlines’ commitment represents purchasing more than twice as much SAF as the rest of the world’s airlines combined. 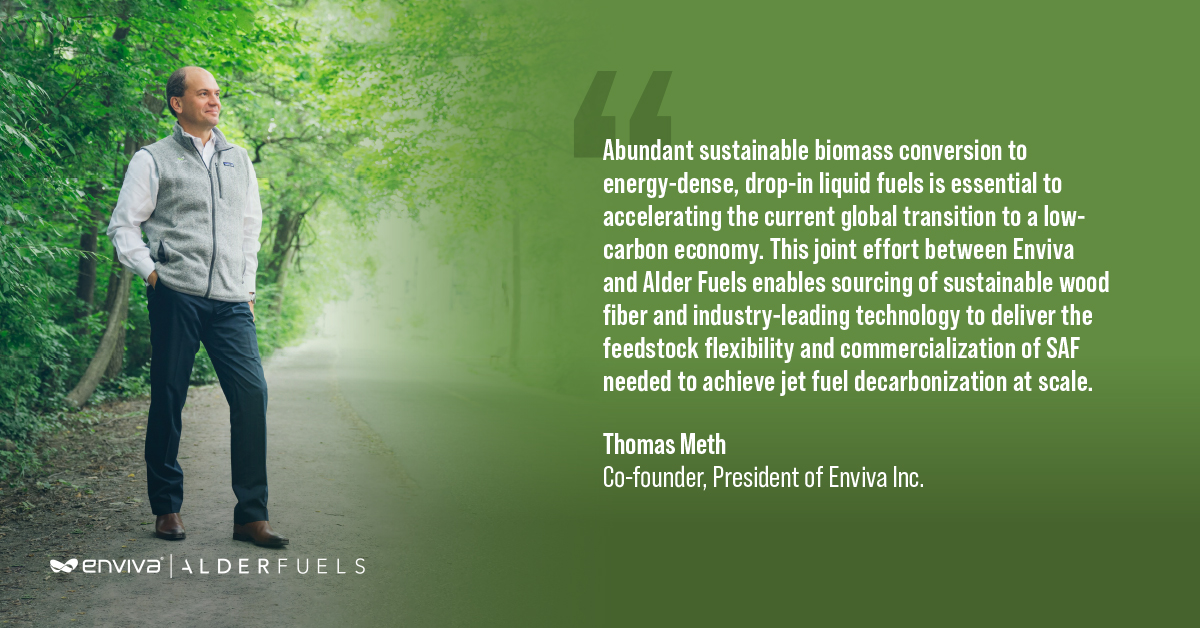 All woody biomass feedstock supplied by Enviva to Alder Fuels will continue to adhere to the U.S. Environmental Protection Agency’s Renewable Fuel Standard, the EU’s Renewable Energy Directive’s requirements, as well as Enviva’s industry-leading Responsible Sourcing Policy. In addition, Enviva and Alder Fuels have committed to collaborating to gain sustainability certification under the internationally renowned Roundtable on Sustainable Biomaterials standard. These guidelines and conditions are further supported by Enviva’s industry-leading Track & Trace program that provides detailed, verifiable, and independently audited data about the sustainability of Enviva’s sourcing activities and the journey its feedstocks take from the forest tract to the production plant to customers around the globe.