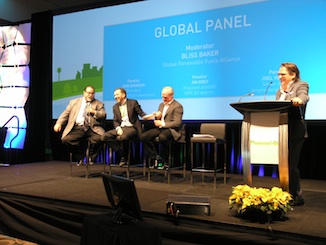 Dec. 3, 2014, Toronto - Executives from Canada's biofuels industry are looking at efficiencies and diversification as tools to ensure the sector's continued growth.

That was the main message shared with a packed room at the first day of the 1st Annual Canadian Bioeconomy Conference. Hosted by the Canadian Renewable Fuels Association (CRFA), the event replaces the association's annual Summit and aims to draw wider participation from across the various sub-sectors of Canada's growing bioeconomy. Judging from panel members and audience make-up, the event was successful.

The event launched on Tuesday with a global panel moderated by Bliss Baker of the Global Renewable Fuels Alliance and including the quotable Bob Dinneen, president of the US-based Renewable Fuels Association, Jim Grey, CEO of IGPC Ethanol Inc. and incoming chair of the CRFA, and Joel Velasco, senior advisor, Amyris Renewable Diesel and representing the Brazilian market.

"We've essentially taken three steps to prepare for the potential changes ahead," Grey explained. "First, we've invested time and money into becoming the most efficient ethanol producers we can, and we've made great strides. Second, we've been actively diversifying into other product streams, basically embracing the biorefinery concept. Finally, we continue to support the lobby and communications efforts of the CRFA. These are all ongoing."

Velasco agreed with these points, but also suggested the industry can take advantage of the current low oil prices otherwise plaguing the sector. "One option is to go to the airlines, who are currently enjoying much lower fuel prices, and suggest they use some of that windfall to live up to their renewable commitments." He added that headwinds like today's low oil and gas prices can be used to look for new opportunities that we tend to overlook in easier times. "Take advantage of the headwinds, tack to the left or right and you'll come out ahead."

For his part, Dinneen notes that the US ethanol industry has been enjoying an excellent year, with more ethanol produced and sold than ever before, and the feeling that 2015 will be another solid year. He also believes that advanced biofuels such as cellulosic ethanol are ready to enter the scene in a bigger way. One dark cloud on the horizon is the now angry US oil lobby.

"Yes, we've had a great year, but you wouldn't know it from looking at US politics. Now that we are 10 per cent of the barrel, the oil industry has woken up and is no longer supporting the industry. We've grown too much."

Dinneen expects the result will be a lively fight or two in Washington, but he also expects that the US RFS policy to support biofuel use will continue as the main pillar of US climate change policy despite the best efforts of the oil lobby.

"The oil guys need 60 votes to enact major change to energy policy in the US, and they don't have them. You'll see a lot of activity and talk, but no change to the RFS."

That's good news for Canadian producers, as Canada has become a major export market for US ethanol producers. Any restriction on market growth south of the border could divert more product up here, a concern echoed by Grey and several other Canadian producers.

On the Canadian political front, Grey closed off the panel by noting that the CRFA and industry still have their work cut out in ensuring Canadians understand the importance of a thriving biofuels sector. Delegates were not concerned about loss of political support just yet, but Grey noted that many of the original allies to Canadian biofuel policies are no longer on the scene.

"Politicians have changed since 2005 and the enactment of the Ontario policies for example. Probably two-thirds of the players are new. We need to continue to explain the original reasons for supporting the sector. Yes it's about greenhouse gases and climate change, but it's also about farm incomes, rural jobs and economies. We have to explain again why the programs are there."