October 9, 2015 - Reduced carbon emissions, green energy production and other environmentally-friendly initiatives are hot topics for the federal, provincial and municipal governments these days. So it comes as little surprise that a variety of green energy projects are popping up across Canada. One of those projects is Laforge Bioenvironmental’s commercial biogas production plant in Saint-André, N.B. 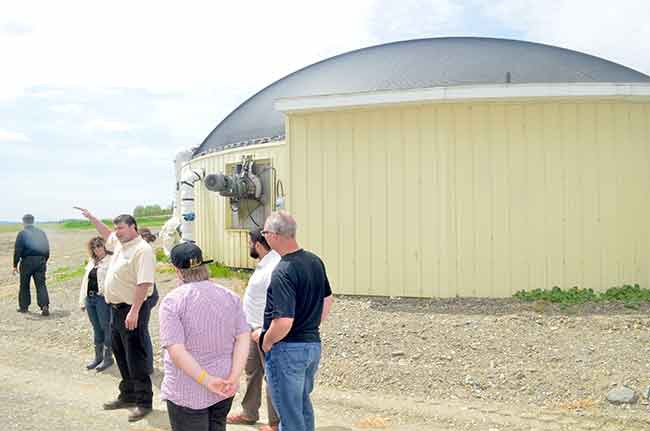 The facility operates two anaerobic digesters on a dairy farm with approximately 90 cows, and is fuelled by a combination of cow manure and organic waste from regional food processors.

The digesters are 12,000 m3 and 1,500 m3 in size. The overall energy production capacity of the site is 1.4 MWh, which is the amount of power that Laforge Bioenvironmental is allowed to put on the grid under their contract with NB Power (also a function of local power demand). However, the site has the potential to produce 2 MWh with the available feedstock in the region.

The $7-million project was done in two phases with 80 per cent of the financing coming through farm credit and the remaining funds coming from a combination of a few green energy grants and a zero-interest loan from the provincial government.

The project is expected to pay for itself within the next six years through electrical generation and tipping fees, according to Kevin Shiell, business development and sales manager for Complete Senergy Systems, the consulting firm that worked on the second phase of the project’s construction.

The expected lifespan of the anaerobic digesters is between 20 to 25 years.

“But like any infrastructure, if you maintain it, replace parts when needed, you can probably make it last longer than that,” Shiell says.

Raw materials
The raw materials used to create the sediment sent to the anaerobic digesters is a combination of manure from the 90 cows at the dairy farm; French fries and potato skins from local food processors; slaughterhouse waste and sugar beets.

“The peels from the potatoes are all steam peeled so the starch is mostly washed off of them. It’s almost all just cellulose,” Shiell explains. “There’s not a lot of biogas value to it, but it’s good organic material. The French fries have a lot of energy in them.”

Fifty acres of sugar beets were grown on the farm last year and are used as an energy crop for the sediment. However, other projects are being considered for the sugar beets, such as the creation of sugar and ethanol.

Two tankers haul dissolved air floatation sludge (DAF) that comes from the slaughterhouse that comes off of primary waste.

Manure is only a small part of the mix, mainly used as a dilutant.

“If the pH of the digester or the buffering capacity of the digester is a little low, we’ll shovel a little manure into it,” Shiell says. “We’re only putting about 30 tons of manure in a day, and about 150 to 180 tons of other materials.”

The process
The cow manure is collected under the holding pen and is then pumped over to the receiving tanks in measured amounts, where it is mixed with other organic waste and churned into sediment. French fries and other organic waste are then added to the mix. The sediment is then pumped over to the anaerobic digester, where it fills the base of the dome.

The sediment in the dome is constantly turned by a motorized mixer and is then heated to 40°C. This process makes the biogases rise up out of the sediment, inflating the dome.

The biogases include carbon dioxide, methane and hydrogen sulfide. The hydrogen sulfide crystallizes during the process and drops back into the sediment, leaving only the carbon dioxide and methane in the air. Those two gases are removed from the anaerobic digesters and fed into nearby biogas engines. The leftover sediment is then transferred to a nearby reservoir, where it is stored for future use as fertilizer.

The biogas engines – a Guascor 600 Kwh engine and a Jenbacher 1.2 MWh engine – generate outputs upwards of 650 kW per hour or 250,000 kW a month. The electricity is fed into the NB Power Grid where it can power upwards of 300 homes, while generating approximately 4.5 million BTUs, which is used to heat an on-site farmhouse, the anaerobic digesters, hot water tanks, the shop and the dairy barn through the use of an in-floor hydronics system installed underneath the cement floor.

Biosolids
The biosolids generated in the electricity generating process are spread out over 1,500 acres of land.

“You apply about 2,000 gallons per acre,” Shiell explains. “We take about two or three months in the spring and pretty much spread it all summer. We’ll stop for a couple months during haying season. Then once the grass has been cut, we’ll put some on afterwards and then we’ll keep spreading until November to get the digester down as low as we can because we have nowhere to put it during the winter.”

One challenge with producing large amounts of biosolids is that the company has to go upwards of 20 kilometres away from the biogas plant to spread it on land, which can become relatively costly.

Wildlife challenges
One challenge that the operation has experienced is a problem with birds where the organic waste is being stored. To counter this issue, the company is installing tarp curtain doors to keep them out. They come at a cost of approximately $1,000 per unit. “They work really well to keep the birds out,” Shiell says.

Tipping fees
Since the amount that is paid per kilowatt of electricity varies from province to province, this type of operation is typically more worthwhile in areas where higher per kilowatt rates exist.

“We only make 10 cents per kilowatt, so 50 per cent of the revenues from this facility come from tipping fees – so McCain pays per ton to drop off material here, for example,” Shiell explains.

Although the paid kilowatt rate in New Brunswick isn’t as high as in provinces such as Nova Scotia or Ontario, between electricity generation, tipping fees, operations using the excess heat in the summer and the future pelletizing of fertilizer, Laforge stands to have a bright future in the biowaste business.