Since opening the doors to the Scotia Atlantic Biomass Company pellet mill in Nova Scotia’s Musquodoboit Valley in September of 2013, it hasn’t been as simple as just producing pellets for the Viridis Energy property. 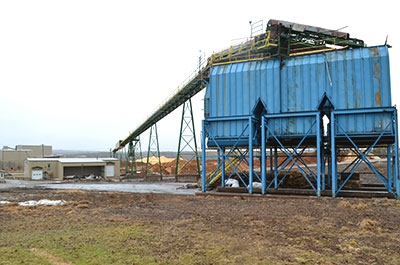 The third incarnation of the plant, constructed by MacTara Limited before it went bankrupt and was followed by an unsuccessful attempt by Enligna to sustain the plant, Scotia Atlantic finds itself working through a series of challenges plaguing the Nova Scotia forest industry.

The company got production off the ground in late 2013 and ran for a fairly solid 18 months before pausing operations this past April as it hunted for a fresh supply of right-priced fibre.

Right-priced fibre has become more and more difficult to come by in the region situated between Halifax and Truro. A severe winter with near-record amounts of snowfall made getting biomass out of the forest difficult for even the most experienced and efficient logging crews. Then, when the snow started melting in April, spring road restrictions forced logging trucks off the roads and stopped the flow of fibre into the mill.

The problems in getting fibre to the mill started before the winter of 2014/2015, dating back to the time before, and during, the start-up of the Scotia Atlantic operations.

“When the sawmills started closing down in Nova Scotia, the province lost a lot of its logging capacity,” explains Julie Millington, general manager of the Scotia Atlantic Biomass Company pellet mill. “The companies that still have the logging capacity are now focused on getting the materials they need. That doesn’t lend itself to our required focused of getting the right materials to the right places.”

The right places include getting biomass fibre to Scotia Atlantic for use in pellet production.

Production thus far
Up until the pause in operations, Scotia Atlantic had successfully loaded four ships with industrial wood pellets heading for Europe where its sales partner, Ekman, has arranged purchase agreements with pellet consumers throughout the region. The first ship was loaded as the plant was ramping up operations, with 23,000 tonnes of pellets sent overseas. The second and third ships, sent in 2014, both exceeded the anticipated 25,000 tonnes per shipment, much to the delight of company officials. The fourth, which left Halifax in April, left at capacity, but was a struggle to prepare for.

The strong level of production so far has been helped by a series of changes and upgrades done over the past two years to help optimize production.

For starters, the company still uses its own chipping equipment at the mill site, a CBI Magnum Force 6400, but a new grate allowing a more refined particle, and smaller grates have been added to the Jeffery hog to decrease the particle size resulting in an increased throughput in the drying operation. Two destoner decks, one brand new and one with new technology installed in the Oliver destoner, are significantly reducing the amount of foreign material making it to the dryer with the pellet fibre. Additional new equipment added, includes new cyclones and the destoner and replacement of the ID fan for the MEC dryer.

One of the biggest struggles facing the plant was removing the frequency of freeze-ups that were occurring during the harsh winter months. The boiler already on site had not been previously utilized, but the company made the decision to fire it up and add steam piping to the necessary buildings to provide steam heat to keep the machines running. While doing so, they removed secondary piping that was no longer needed.

As early production began, an issue was noticed in the hammermills that needed immediate attention. One side of the teeth were wearing down significantly quicker than the other side. Rather than take countless man-hours to switch the teeth from one side to the other, the company installed a reversing mechanism.

There were also significant improvements made to several systems, already in place, that needed increased efficiency to meet production targets. The dies in the presses are now replaced once a specific throughput threshold has been hit, providing the most efficient operation level possible. There were also changes made to the system for preventative maintenance, spark detection, information tracking and reporting for elements like moisture control and production.

All of the changes, as Millington explained during our tour of the facility, were made to remove any bottlenecks found in the operation that were preventing the plant from running as efficiently as possible. As each issue was identified, a solution was found and put in place, allowing the company to move to the next area needing attention.

Looking across at the Scotia Atlantic plant from the MacTara sawmill site. MacTara built the original pellet mill before it went bankrupt.

Fibre issues
Even as operational challenges have been overcome, the struggle continuously returns to the idea of right-priced biomass, the primary difficulty facing the operation.

“We have had some challenges in making sure that we have the right-priced fibre coming in to this facility,” Millington says. “For now, we are building our fibre supply at the right price to be profitable at this facility.”

That right price is more of a case of supply than anything. Originally, the Scotia Atlantic plant was built to run in conjunction with a sawmill, feeding the pellet mill shavings, chips and sawdust from lumber production. Instead, Scotia Atlantic has to buy fibre from logging contractors and sawmill operators without the establishment of the value chain.

In the western part of the province, a consortium is coming together to help the government establish best practices for managing the lands that the provincial government purchased from
Bowater/Resolute a few years ago. Those lands were previously working forests, and the Crown intends to operate the land in the same way. But instead of handing the operation of the land to a single company, the province will work with a group of forest industry stakeholders in the region, ones that rely on those lands for some or all of its fibre, to manage the cut to ensure that all industries get the fibre they need.

A similar model would be a welcome sight for Millington and her team, who are looking for a way to establish a stronger supply chain amongst the stakeholders in the eastern part of the province. That could be easier said than done, as more industries compete for less fibre than their western counterparts.

Fibre not the only issue
Getting industry stakeholders to establish a stronger supply chain that feeds fibre to all wood products companies is only part of the issue.

As the industry has begun to regain its confidence, banks and private lending institutions have not bought into the upswing, making it very difficult for contractors to purchase new equipment and expand their operations. That’s why part of the solution in Nova Scotia needs to fall on the government’s shoulders, providing low-cost and no-cost loan opportunities to help bring stability back to the market by improving consumer confidence.

There is also a nervous excitement surrounding the number of young skilled workers that are finding their way back home to Nova Scotia. Many forest products industries in Nova Scotia are seeing an increase in resumes being filed from workers that had once gone to Alberta to work in the oilpatch, but have returned as that industry takes a hit.

The returning workers are good to see, but the flight risk remains strong and it only solves part of the issue.

The challenge still facing the forest products industry is the need to bring workers back to ultimately help strengthen the province’s harvesting capacity.

“Human resources is a big issue here in Nova Scotia,” says Jeff Bishop, executive director for the Forest Products Association of Nova Scotia. “For the next five years, the issue will continue to be contractor capacity. Because of the downturn and subsequent closures, we saw a significant decrease in our contractor and harvesting capacity.”

There are reasons for optimism for the long-term future of the Scotia Atlantic pellet plant. Some harvesting contractors still manage to find a way to make new investments even without the widespread support of financial institutions. Millington noted that three separate contractors in the last six months have purchased walking floor trucks. As Scotia Atlantic has a truck dumper that is not yet onsite, the walking floor trucks are vital for transporting chips and sawdust to the mill.

Scotia Atlantic also did its part this past winter to help combat the shortage of wood pellets for domestic consumption. With few pellet mills in Atlantic Canada and a substantial shortage of domestic pellet supply for the region, Scotia Atlantic provided some of its industrial pellet supply for home use. Millington suggests that is something that could be made available annually to help out if such a need ever emerged again in the region.

There has been an uptick in conversations between industry stakeholders in the early part of 2015, leaving the impression that there is a renewed sense of cooperation throughout the industry. The Forest Products Association of Nova Scotia continues to educate the public on the nuances of the industry, including a focus on providing an understanding of measures already in place to ensure that fibre ends up at the right end user.

As Viridis Energy works to right size the Scotia Atlantic operation based on the current right-price fibre availability, Millington believes that full capacity at the Musquodoboit Valley facility may still be within its reach as harvesting capacity and consumer confidence grow in Nova Scotia.