Features Pellets WPAC
From pellets to power: Inside North America’s first power plant to be converted from coal to biomass 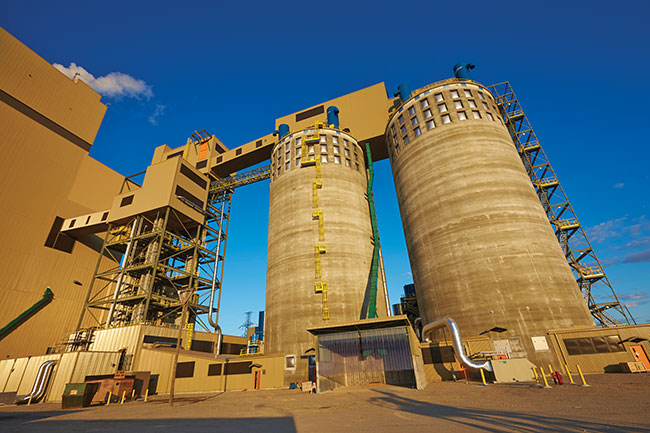 The biomass receiving, handling and storage systems at the Atikokan OPG plant. Explosion vents are visible on each silo, as well as in key locations in the material handling systems. Photo courtesy OPG.

When the Ontario government passed legislation almost 20 years ago to discontinue the use of coal as a generator of electricity, one of Ontario Power Generation (OPG)’s plants was given a new lease on life. Instead of being decommissioned with the other coal-fired plants, in 2014, the Atikokan, Ont., generating station became North America’s first plant to be converted from coal to biomass.

Built in 1985, the plant was still considered fairly new with plenty of service life remaining, prompting the provincial government to recommission it as a provider of an alternative and cleaner power.

“From a climate change perspective, a renewable fuel like biomass just made so much sense,” Darcey Bailey, director of plant operations for Ontario Power Generation’s northwest operations, says.

The changeover, however, was a bit “unsettling,” he says, adding OPG looked to Europe for guidance since a coal-to-biomass conversion had never been done before in North America. Europe was “ahead of the curve,” he says, and had some positive experiences that could be leveraged.

OPG did extensive research into the European example, which “really increased the comfort level of being able to make this happen.”

The renovation work required to convert the plant took less than two years to complete, and the biomass-fueled plant came online on July 24, 2014.

The initial investment for constructing the plant was between $750 million and $850 million (in 1983 dollars), and the renovations cost about $175 million. While there was still significant cost tied to the conversion, “it was a fraction of a new build cost,” Bailey says.

Overcoming challenges
But the project wasn’t without its share of challenges. For example, the plant needed a custom-built solution for the receiving, handling and storage of the especially dry and small-sized biomass pellets. A number of systems within the plant also needed to be reworked, which presented technical challenges.

“It’s not unexpected to run into obstacles, but you learn to innovate and adapt quickly,” Bailey says. “We’ve overcome everything that’s been put in front of us.”

Bailey credits a good team of operations personnel for overcoming these obstacles.

However, the conversion impacted the number of people employed at the plant. The loss of the coal yard meant operations and fuel-handling staff were no longer needed. All fuel-handling, storage and transfer is now done automatically. Now, the plant has 65 direct employees working on a five-shift cycle per week. Operations are 24/7, 365 days a year.

About 90,000 metric tonnes of pellets are used annually to produce between 140 and 150 gigawatt-hours (GWh) of electricity.

From pellets to power
The wood pellets are acquired from two different suppliers – BioPower in Atikokan and Resolute Forest Products in Thunder Bay, Ont. A third party – Winnipeg-based Gardewine Group Ltd. – is tasked with transporting the pellets to the plant.

Pellets are discharged from the trucks into a receiving hopper before being bucket-elevated onto a couple of conveyors that dump them into one of two silos. The large concrete silos each have a capacity of 5,000 metric tonnes.

Bailey says the plant decides which of the two silos will accommodate the received pellets based on current maintenance practices as well as the age of the pellets already in storage. If maintenance is being done to one silo, the other will be used, or if one silo contains a significant quantity of older pellets, efforts will be made to avoid adding new pellets to them.

Generally, an equal number of pellets is retained in each silo. Such a balance is needed to avoid spontaneous combustion, since biomass decomposes and heats up, Bailey explains.

The pellets are sent through another series of conveyor belts and bucket elevators before entering the plant. Inside is a surge storage of pellets of about 50 tonnes per bin which are maintained above each of the feeders leading to the boiler. The pellets entering the plant must be distributed among the five surge bins, each of which sits atop a feeder belt, metering the pellets into a pulverizing system.

At this stage of the process, the pellets are still a standard six-millimetre industrial wood pellet size, but are then “depelletized” in the pulverizer. The pellets are crushed and returned back to their constituent fibre size. The fibre is then conveyed by primary combustion air systems from B&W and Howden Fans, picking up the wood dust and moving it into the actual burners of the boiler.

Each pulverizer feeds three burners. There are five pulverizers and five ‘sets’ of burners, which can be used to produce power, based on the region’s electricity needs.

The silos were constructed by FWS Group of Winnipeg, a company that works mainly with the grain industry and with products that are combustible and biological. Aecon Industrial was responsible for material handling and storage.

Most of the equipment inside the plant was either already in place or retrofitted, Bailey says.

“Those surge bins were a portion of the same bins we used to store the coal inside the plant with,” he explains.

OPG re-used only 50 tonnes of its 850-tonne bunkers, capping only the bottom cone to serve as the surge bin.

The B&W MPS75 pulverizers and Stock Gravimetric feeders have been retrofitted with different pieces to handle the different material, Bailey says. The burners were replaced with Hitachi DS-W and Doosan models, but the B&W Radiant Tower boiler and other major pieces of equipment remain the same.

’Bumps and bruises’
Since converting the plant, the most significant change OPG has dealt with is fuel delivery logistics.

“For coal, we would receive a unit train of 10,000 tonnes at a time, and that unit train would unload and be stored on site outside,” Bailey explains. “You’d get one of these deliveries perhaps once a week. We’re now getting 15 to 20 trucks a day of deliveries.

“The other difficulty we had to get around is that the pellets need to constantly arrive and constantly be consumed because we only have 10,000 tonnes of storage and the pellets are arriving every day,” he adds. “So, we have to manage that inventory much tighter than we had ever been accustomed to before.”

Bailey says managing inventory wasn’t a formidable challenge in the days of coal because there was plenty of room for flexibility, but things are tighter with pellets.

“The whole logistics of the pellets’ receipt, storage and overall inventory control was a major challenge to overcome, and that took a team to work together to figure that out with some bumps and bruises along the way.”

A number of technical concerns also arose from the operations side of things, including understanding how to deal with a new type of ash. To address these issues, several tweaks were made to the plant’s systems, including its ash system. Ash was initially removed by a flapper valve, but OPG found the component had a short lifespan and tended to plug up. It has since been replaced by a more efficient rotary valve.

“We had to learn how to run new equipment for the first time in almost 30 years of operation,” Bailey says. “We had to retrain our staff on how to be resilient and how to identify problems.”

Atikokan is still a suspension-fired boiler system that fires a burning fuel to create steam, but it’s a different fuel with different fuel-to-air ratios and which burns at different radiance, he adds.

He expects there will be other upgrades or sub-system replacements to be addressed within the next 10 to 15 years, including the generator itself, but those are standard for the industry.

A carbon negative future?
Although the plant officially supports the communities of Northwestern Ontario, it is a part of the province’s overall power grid. Bailey compares the grid to a large bucket being filled by water from several faucets.

“We’re (Atikokan) dumping water into that bucket,” he explains.You can imagine thousands of small holes in the bottom of the bucket as the users of the power grid, he adds. But, “who’s to say that the water from one tap comes out of a certain hole at the bottom?”

“The benefit of this station is fairly regional when it comes to providing the power. It’s essentially here to support the communities of Northwestern Ontario, but at any given time those megawatts may be headed east and south from here,” he explains.

But, currently, securing a future for the Atikokan plant is a priority, Bailey says. OPG is in the midst of a power purchase agreement that began in 2014 and continues to July 2024.

“In order to operate beyond that, we at OPG need to partner and get an agreement with the IESO (Independent Electricity System Operator) to have an operating agreement beyond 2024,” he explains, adding he’s optimistic this will happen.

OPG is also excited about the future of the Atikokan plant and the role it could play in regards to environmental change. The company hopes to make the plant net zero within the next couple of decades, Bailey says.

“I think Atikokan generating station is in a very unique and positive position,” he explains. “It’s the only asset we have in our generation portfolio that could become a negative emitter of carbon because our fuel today is neutral. If we were to incorporate any type of carbon capture or carbon sequestration technologies, this site has the potential to become a carbon negative site. I think that is incredibly exciting.”