When most people hear the words “flax straw,” they… 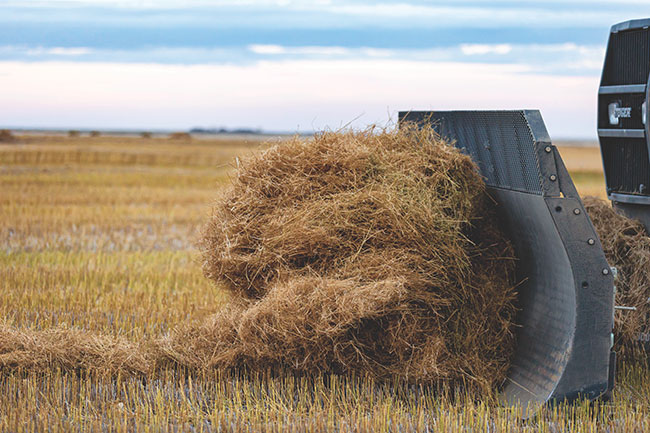 When most people hear the words “flax straw,” they don’t think about biofuel. But a new start-up based in Regina, Sask., called Prairie Clean Energy wants to change that.

The company, which was founded in March 2020, has developed a process for turning flax straw, which is often burned or trashed, into biofuel. But where did the idea for this project come from?

The founder and chief relationships officer of Prairie Clean Energy, Trevor Thomas, saw an opportunity in the environmental space, says Mark Cooper, president and CEO of the company.

Thomas realized there is a lot of agricultural waste in Saskatchewan – in particular flax straw from flax crops – and began doing research into the possibility of using this material as a biofuel.

Thomas soon brought Cooper on board, and then they recruited their third partner, David Whitrow, as chief financial officer. From there, the three partners worked on developing a business plan, looking into the supply of flax straw in Saskatchewan.

“We realized the demand for sustainable, renewable, stable fuel sources from biomass around the world is pretty significant, and our supply of the same around here [in Saskatchewan] was abundant” Cooper says. “We thought that maybe the time had come to capitalize on all of the agricultural waste.”

They took their idea to farmers in the province, and received positive feedback and interest.

“They’re very excited,” Cooper says. “There’s about three-quarters of a million tonnes of flax straw per year that’s getting burned, and farmers don’t like burning it because they know it’s not good for the environment and it’s a fire hazard for the surrounding properties and communities.”

Because of how difficult it is to deal with the flax straw, farmers in Saskatchewan have limited the amount of flax they grow and focused on growing flax that minimizes the amount of straw produced. This is what’s known as ‘the straw problem.’

Prairie Clean Energy saw an opportunity to help solve this problem by collecting the flax straw from farmers and processing it to use as biofuel.

The process
But what exactly is the process for turning flax straw into biofuel?

There are two processes that Prairie Clean Energy is researching, in conjunction with the University of British Columbia (UBC)’s Biomass and Bioenergy Research Group (BBRG) and the University of Saskatchewan’s engineering department.

The first process is compressing bales of flax straw.

“That’s the simplest solution for us – the farmers bale the product, typically in round bales, and deliver it to our facility where we shred, dry, re-bale and compress the product,” Cooper explains. The bales are then shipped to customers, and can be used in fluidized boilers or similar systems that can accommodate baled product.

Prairie Clean Energy is also exploring the possibility of pelletizing the flax straw, working with the UBC BBRG to research this process.

“What we’ve been told from experts in the pellet industry is that pelletization is, in the long run, the most economical way to handle the transportation of the product,” Cooper explains.

Given the predominance of the wood pellet market, Prairie Clean Energy is very interested in this option.

“The pellet market is much more widely understood and much more developed globally and domestically, so we think it opens up a lot of marketplaces if we can make the economies of it work,” Cooper says. “The challenge, from my understanding, is that the infrastructure costs of pelletizing at the production capacity that we want to be able to do is significantly higher than the infrastructure cost of bailing, so we have to figure out the economics.”

UBC is also conducting a supply chain analysis to understand the total carbon footprint of the lifecyle of the process. But flax straw is a carbon sink, and this process would prevent the straw from being burnt in the fields, which are both positives, Cooper says.

This research is set to be completed in March. In the meantime, Prairie Clean Energy is using the compressed bale method in its test runs. Hunterwood Technologies, based in Cochrane, Alta., has done most of the analysis and production for the company.

So far, these test runs have shown that the biofuel produced from flax straw is highly efficient.

“When properly dried, flax straw produces 8,500 BTUs per pound, and the chemical composition is fairly similar to wood,” Cooper says. “From our perspective, as a fuel source, it’s as good as wood is – it even burns a little hotter. So, it’s a great product.”

Expanding production
Prairie Clean Energy plans to expand their production in the next year to be able to produce 20,000 tonnes of product per month, or about 250,000 tonnes per year.

While flax is typically harvested in September and October, Prairie Clean Energy plans to collect flax straw from the farmers throughout the year, so that they can produce product year-round.

“We’re not intending to be seasonal in our delivery, and we think that will provide steady supply for folks,” Cooper says.

When it comes to customers, Prairie Clean Energy is having conversations with industrial users in B.C., companies in the UK and companies in Japan. Once the company has signed a contract with a customer, they will begin construction on a dedicated production facility in the Regina area.

Logistical challenges
There are, of course, some challenges when launching a new business in a relatively new field.

“The single biggest challenge is the logistics and managing the logistics of aggregating a product from over 500 different farms in a given year, and the location of those farms and the amount of product that they have from year-to-year changes,” Cooper says. “So, aggregating that is a huge problem.”

Despite the strong response from farmers, the demand for the product is not at the same level because customers first need to understand what the product is and how it will work in their boilers, among other things, Cooper says.

“So, it’s just taking time to get that market developed,” he says.

There are also regulatory barriers depending on customer location. In B.C., for example, if a customer wants to burn flax straw, it has to be included in their permit from BC Hydro. This means BC Hydro needs to be educated about the product and customers need to go through the permitting process. Meanwhile, to be able to export product to Japan, Prairie Clean Energy has to get their product to be considered part of the feed-in-tariff.

But the company has multiple partners to help them overcome these regulatory hurdles.

Building awareness
Looking ahead, the next step for the company is to further build awareness about flax straw as a viable biomass fuel, Cooper says. They also need to secure clients who are prepared to purchase flax straw from the company, and then get their production plant up and running to be able to deliver on their commitments.

The company is also working to build more awareness about agricultural biomass and support further research in the field. To help accomplish these goals, Cooper and his partners recently founded the Prairie Biomass Association.

“We recognize there’s a lot of opportunity in Canada – especially on the Prairies – for growth of the use of biomass, especially as we have to move away from burning coal and as we see increased pressure from the federal government and internationally to reduce the carbon footprint of our energy sector,” Cooper says.

In the Prairies alone, there is more than two million tonnes per year of available agricultural biomass, he says. This is a massive opportunity for Canada, but more research needs to be done on the viability of different products such as wheat straw, barley and corn.

“One of the reasons why we wanted to launch the association is that we want to partner with the research groups and we want to get that research going now, because while we focus on flax, we want to support and understand how those other agricultural products can be used and brought to market,” Cooper explains. “Because as the market continues to improve for biomass, we think that Canada – which is already a powerhouse in providing wood pellets – can supplement the pellet market with really solid agricultural waste.”